Little Human Subspecies: Where’s the Evidence? From the lush oases of Africa’s Ethiopia, across the planet to the sweltering jungles of Mexico, beyond the horizon to the primordial coasts of Hawaii, and back again to the gardens, olive groves, and marble columns of ancient Greece, an obscure common thread of small human subspecies endures. 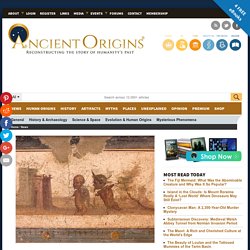 Detailed accounts persist about human subspecies that were small in stature, nocturnal, seemingly gifted with advanced knowledge, who primarily dwelt underground, and emerged to the surface only at night. Is it possible that such specific parallels may be something more than just common mythological archetypes? Is there really some collective subconscious dynamic that somehow triggers practically every indigenous ethnic group from around the globe to harbor the belief that in prehistoric times there existed two to three foot (0.6 - 0.9 meter) tall people who were skilled masons, astronomers, magicians/sorcerers, and who hoarded treasure?

Or is there more than mere ‘belief’ to this story? The Beauty of Loulan and the Tattooed Mummies of the Tarim Basin. Loulan was discovered in 1980, but it was 3800 years ago that she died on the trade route known as the Silk Road. 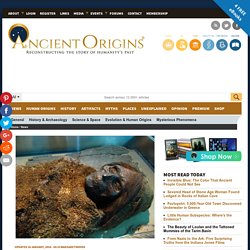 The natural dryness and salty soil preserved her and over two hundred other mummies, individuals who had lived in several closely located settlements along the trade route. The mummy has been called the Loulan Beauty because of her amazingly preserved stately facial features that have remained quite beautiful even in death. 'Mummy of a child warrior from 'lost medieval civilisation' unearthed near Arctic' Scientists this week opened the mummified child's remains cocooned in birch bark and copper which - combined with the permafrost - produced an accidental mummification. 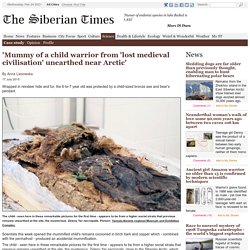 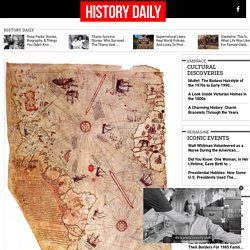 Bronze Age and Early Iron Age[edit] The Bronze Age was the period in human cultural development when the most advanced metalworking (at least in systematic and widespread use) included techniques for smelting copper and tin from naturally-occurring outcroppings of copper ores, and then combining those ores to cast bronze. These naturally-occurring ores typically included arsenic as a common impurity. Copper/tin ores are rare, as reflected in the fact that there were no tin bronzes in western Asia before 3000 BC. European Paganism and Christianization. In contemporary conversations about decolonization, this is a point which is often overlooked – Europeans are indigenous too. 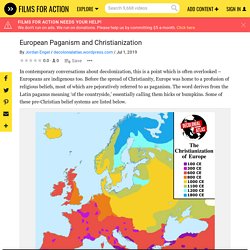 Before the spread of Christianity, Europe was home to a profusion of religious beliefs, most of which are pejoratively referred to as paganism. The word derives from the Latin paganus meaning ‘of the countryside,’ essentially calling them hicks or bumpkins. Some of these pre-Christian belief systems are listed below. Lasers Reveal a Maya Civilization So Dense It Blew Experts’ Minds.

Ancient Greek Origins Revealed Through DNA Analysis. Picking up on the epic poetry of Homer's Iliad and Odyssey, the Greeks have sometimes boasted about their Mycenaean ancestors. 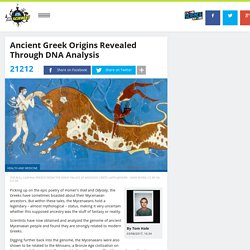 But within these tales, the Mycenaeans hold a legendary – almost mythological – status, making it very uncertain whether this supposed ancestry was the stuff of fantasy or reality. Scientists have now obtained and analyzed the genome of ancient Mycenaean people and found they are strongly related to modern Greeks. Digging further back into the genome, the Mycenaeans were also shown to be related to the Minoans, a Bronze Age civilization on the island of Crete, which flourished before Mycenaea. Untitled. 5,000-year-old hieroglyphs have recently been discovered in Australia and are challenging the very basis of history itself. 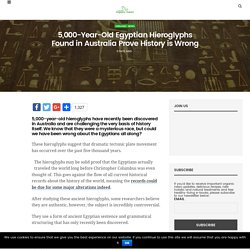 We know that they were a mysterious race, but could we have been wrong about the Egyptians all along? These hieroglyphs suggest that dramatic tectonic plate movement has occurred over the past five thousand years. The hieroglyphs may be solid proof that the Egyptians actually traveled the world long before Christopher Columbus was even thought of. This goes against the flow of all current historical records about the history of the world, meaning the records could be due for some major alterations indeed. After studying these ancient hieroglyphs, some researchers believe they are authentic, however, the subject is incredibly controversial. DNA scientists claim that Cherokees are from the Middle East – Natives News Online. “The Cherokees have lived in the Southeastern United States for over 10,000 years.Cherokees developedand cultivated corn, beans and squash – “the three sisters” – along with sunflowers and other crops. 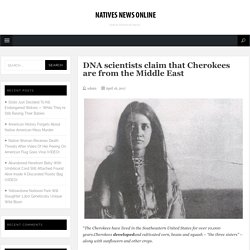 Archaeological evidence, early written accounts, and the oral history ofthe Cherokees themselves show the Cherokees as a mighty nation controlling more than 140,000 square miles with a population of thirty-six thousand or more. Often the townhouse stood on an earthen mound, which grew with successive ceremonial re-buildings.” The Eerie Balbal Statues of the Eurasian Steppe. Ancient nomads are virtually invisible in the archaeological record, as they left few traces of their lifestyle behind. 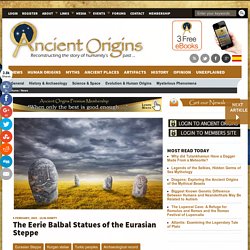 Unlike sedentary populations, nomads did not have permanent structures, nor did they use pottery and ceramics, which are easily breakable for people on the move. Nevertheless, across the Eurasian steppe, ancient nomadic populations did leave a lasting mark on the world - the mysterious Balbal statues which stand like sentries in the vast plain of land that stretches from Ukraine to Mongolia. In the Eurasian Steppe, the nomadic Turkic and Mongol tribes were said to have had a variety funerary customs. Apart from burial and cremation, these nomads also practised abandonment and the exposure of corpses in trees.