SelfControl. 7 Things Christians Should Give Up To Reach Unchurched People. So you want your church to reach people who don’t go to church. 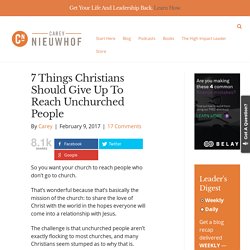 That’s wonderful because that’s basically the mission of the church: to share the love of Christ with the world in the hopes everyone will come into a relationship with Jesus.

It's a Miracle! God Heals This Pastor as He Preaches on Healing. This story of Duane Miller’s healing is, well, almost too miraculous to believe. 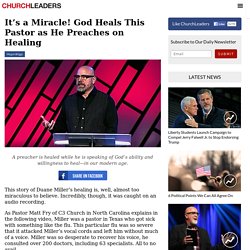 Incredibly, though, it was caught on an audio recording. Evolution Just Got Harder to Defend. Stromatolites in Shark Bay. 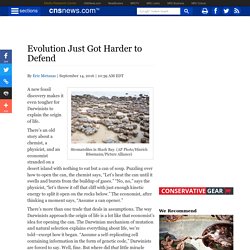 (AP Photo/Hinrich BSsemann/Picture Alliance) The Things I Don’t Deserve. Good Pictures Bad Pictures. Kids Can Learn to Reject Pornography - Protect Young Minds. The River, The Mountain, and You. Seven Things Church Members Should Say to Guests in a Worship Service. One of the more common questions I’m asked relates to growth barriers. 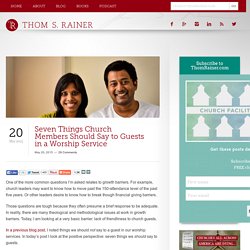 For example, church leaders may want to know how to move past the 150-attendance level of the past five years. Or other leaders desire to know how to break though financial giving barriers. The Entire Bible Explained In One Facebook Post. This Guy Nails It. St. Paul Nurse To Help Fight Ebola Outbreak. Paul nurse knows Ebola risk - and that she can help. Carrie Jo Cain knows the Ebola epidemic in West Africa is frightening, even to an emergency room nurse. 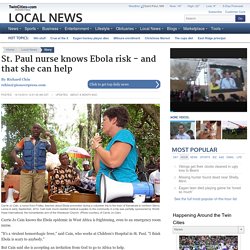 "It's a virulent hemorrhagic fever," said Cain, who works at Children's Hospital in St. Paul. "I think Ebola is scary to anybody. " But Cain said she is accepting an invitation from God to go to Africa to help. As a nurse, she knows about sanitation and decontamination, how to set up an isolation unit and how to train health care workers in infectious disease protection. As the child of missionaries, the 48-year-old Fridley woman grew up in Sierra Leone, one of the countries in the region hardest hit by the Ebola outbreak. Gungor drifts from biblical orthodoxy. Dove-award winning artists Michael and Lisa Gungor—whose “Dry Bones” and “Beautiful Things” became worship anthems across the country—are known for creating a supple pop-eclecticism that transcends traditional genre limitations while maintaining Christian themes. 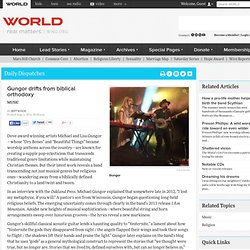 But their latest work reveals a band transcending not just musical genres but religious ones—wandering away from a biblically defined Christianity to a land twixt and tween. In an interview with the Oakland Press, Michael Gungor explained that somewhere late in 2012, “I lost my metaphysic, if you will.” A pastor’s son from Wisconsin, Gungor began questioning long-held religious beliefs. The emerging uncertainty comes through clearly in the band’s 2013 release I Am Mountain. Poolside Purity & Bikini Battles. Here we go again. 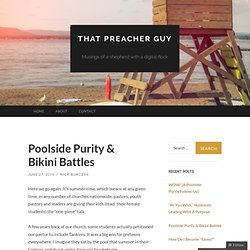 It’s summer time, which means at any given time, in any number of churches nationwide, pastors, youth pastors and leaders are giving their kids (read: their female students) the “one-piece” talk. A few years back at our church, some students actually petitioned our pastor to include Tankinis. Ten Reasons Churches Are Not Reaching Millennials - Frank Powell. I am very passionate about the Millennial generation. 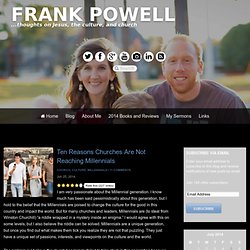 Everything We Think We Know About Marriage and Divorce is Wrong. Have you ever quoted the facts about the 50% divorce rate? 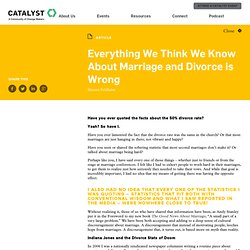 Yeah? So have I. Have you ever lamented the fact that the divorce rate was the same in the church? 6 Heretics Who Should Be Banned From Evangelicalism. What does it mean to be “evangelical”? 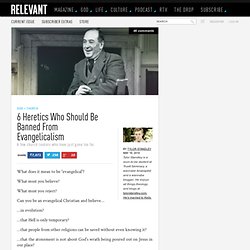 What must you believe? What must you reject? Can you be an evangelical Christian and believe… …in evolution? Why I Don’t Believe in God Anymore. A world-famous chemist tells the truth: there’s no scientist alive today who understands macroevolution. Professor James M. Tour is one of the ten most cited chemists in the world. He is famous for his work on nanocars (pictured above, courtesy of Wikipedia), nanoelectronics, graphene nanostructures, carbon nanovectors in medicine, and green carbon research for enhanced oil recovery and environmentally friendly oil and gas extraction. He is currently a Professor of Chemistry, Professor of Computer Science, and Professor of Mechanical Engineering and Materials Science at Rice University.

He has authored or co-authored 489 scientific publications and his name is on 36 patents. Although he does not regard himself as an Intelligent Design theorist, Professor Tour, along with over 700 other scientists, took the courageous step back in 2001 of signing the Discovery Institute’s “A Scientific Dissent from Darwinism”, which read: “We are skeptical of claims for the ability of random mutation and natural selection to account for the complexity of life.

How to Help a Friend Fight Depression. Depression is debilitating. When I am caught in its spiral of judgment-clouding twisted logic there is often little I am able to do for myself. I know I’m hard to love when I’m depressed, but if you are the rare friend who is committed to staying with me through the pain, consider these seven ways you can help me. 1. Don’t Judge. You will feel frustrated with me. But please don’t judge me. Pray that your heart would be full of grace toward me. Internet television for teens. This Guy Proves It’s Crazy to Be Atheist With One Simple and Hilarious Question. Five Bible Verses You Need to Stop Misusing. The other day, someone gave me a note with Nahum 1:7 printed at the top: “The Lord is good, a refuge in times of trouble. He cares for those who trust in him.”For some reason, they neglected to include the next line, which continues the thought from verse 7: “But with an overflowing flood he will make a complete end of Nineveh.”

Okay, so maybe the fuller version doesn’t deliver quite the same Hallmark moment. And maybe that’s the problem with how many Christians use the Bible. 7 Ways to Stop Being Cynical About the Church. 10 Bad Reasons to Be a Pastor. FaithTap: Proof God is All Around Us. 11 Questions Every Twentysomething Should Ask. Why Your Spiritual Life Needs Travel. Rob Bell on Ministry Burnout. MHK Food For Thought. BadChristian. Why we are Bad Christian. Un-Learning. RSA Shorts - The Power of Empathy. Just a thought. A former pastor's journey into atheism. A Year Without God: A Former Pastor's Journey Into Atheism. What difference does God make? About a year ago a friend and Episcopal priest, told me her atheist friend asked her this question.

Dinosaurs In The Bible - What Does The Bible Say About Dinosaurs. Tanniyn - Old Testament Hebrew Lexicon - King James Version. The history of Christmas and how it began. I. When was Jesus born? Paul Harvey and “The Man and the Birds” - Christian Heritage Fellowship. The man to whom I’m going to introduce you was not a scrooge, he was a kind decent, mostly good man. 5 Things Christians Should Stop Saying — JASON JOHNSON. The Solution is Cheesecake. May 14, 2013.