Botswana Accused of Allowing Fracking in National Parks. The government of Botswana has quietly allowed international companies to explore for natural gas in some of the country’s most sensitive national parks using the controversial drilling method of hydraulic fracturing, according to a new documentary released in South Africa. 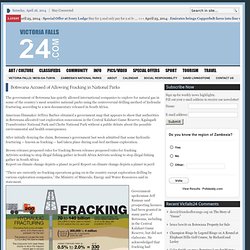 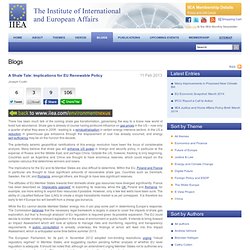 Poland Shale Boom Falters as State Targets Higher Taxes. Poland’s shale gas boom is threatened even before it gets started after some wells failed and the government sought to increase taxes on profits. 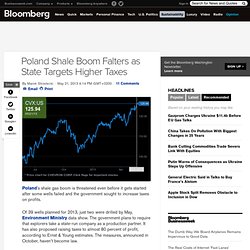 On the frontline of Poland's fracking rush. Chris Faulkner is an oil man. 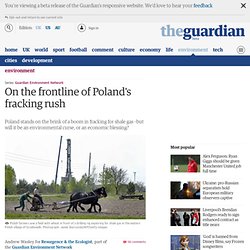 From Dallas, Texas. And his company, Breitling Oil and Gas, is a major player in the burgeoning shale gas sector. Faulkner is in London to give a presentation on whether Europe is the next shale gas hotspot, and to ask whether – if so – it has the necessary infrastructure to cope with a US style 'dash for gas'. But he's also here to explain how the controversial process for extracting underground shale gas reserves – hydraulic fracturing, or 'fracking' as it has become known – can be green.

Contrary to the myths spread by environmentalists and parts of the media, the oil man contends, injecting – at high pressure – a mixture of water, sand and chemicals deep into the earth to release gas reserves is not in itself bad for the environment. Instead, Faulkner believes, the oil and gas industry has done a poor job in marketing itself and in managing its public relations. The Breitling CEO does acknowledge that fracking has impacts. "Fracking can be green. Shale oil and shale gas resources are globally abundant. June 10, 2013 Source: U.S. basins from U.S. 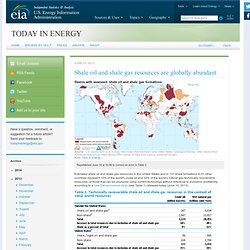 Energy Information Administration and United States Geological Survey; other basins from Advanced Resources International (ARI) based on data from various published studies.Note: Click to enlarge. Republished June 14 at 10:56 to correct an error in Table 2. Estimated shale oil and shale gas resources in the United States and in 137 shale formations in 41 other countries represent 10% of the world's crude oil and 32% of the world's natural gas technically recoverable resources, or those that can be produced using current technology without reference to economic profitability, according to a new EIA-sponsored study (see Table 1) released today (June 10, 2013). More than half of the identified shale oil resources outside the United States are concentrated in four countries—Russia, China, Argentina, and Libya—while more than half of the non-U.S. shale gas resources are concentrated in five countries—China, Argentina, Algeria, Canada, and Mexico.

Us/cee-shale-gas comparison. China Drills Into Shale Gas, Targeting Huge Reserves Amid Challenges. Catherine T. Yang Hills and water have shaped the story of Chongqing, in China's southwest. At the confluence of the Yangtze and Jialing rivers, the Sichuan Province city became China's first inland port open to foreign commerce in 1891. In the 1930s and '40s, Chongqing served as China's wartime capital, although the mountain ranges on all four sides provided less of a buffer than hoped against Japanese air raids. China slow to tap shale-gas bonanza. Redlink/Corbis Technicians inspect a conventional gas well in China’s Tarim basin, which is also rich in shale gas. 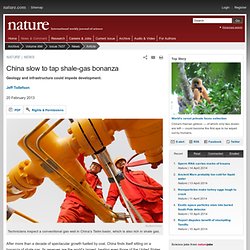 After more than a decade of spectacular growth fuelled by coal, China finds itself sitting on a bonanza of shale gas. Its reserves are the world’s largest, beating even those of the United States. But developing this vast resource won’t be easy, as a bidding last month for shale-gas leases made clear. “The resource is huge,” says Jane Nakano, a fellow of the Energy and National Security Program at the Center for Strategic and International Studies in Washington DC. To offset some of the coal use that contributes to its status as the world’s largest greenhouse-gas emitter, China wants to boost natural gas from around 4% of the country’s energy mix to 10% by 2020.