Economics evolves: A long way from dismal. Silicon Valley economists: Meet the market shapers. Silicon Valley’s Mirror Effect. “If meritocracy exists anywhere on earth, it is in Silicon Valley,” wrote David Sacks in an email to The Times’s Jodi Kantor.

Kantor was working on an article, published in The Times on Tuesday, about the Stanford class of 1994 — the class that graduated a year before Netscape went public, and, for all intents and purposes, started the Internet economy. She was exploring why the men in that class had done so much better in Silicon Valley than the women. Sacks, meanwhile, was one of the most successful members of the class. At Stanford he wrote for The Stanford Review, “a conservative-libertarian campus newspaper,” where he befriended Peter Thiel, a fellow libertarian.

Then, in 1998, Sacks, Thiel and a handful of others — overwhelmingly white and male — founded PayPal, which made them all very rich. Shanley Kane of Model View Culture Challenges a “Corrupt” Silicon Valley. Shanley Kane is the founder and editor of the most interesting and original of new publications that cover technology: Model View Culture, a quarterly journal and media site that offers readers a remorseless feminist critique of Silicon Valley. 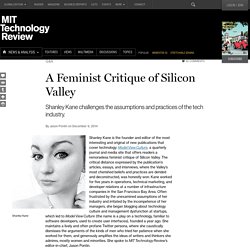 The critical distance expressed by the publication’s articles, essays, and interviews, where the Valley’s most cherished beliefs and practices are derided and deconstructed, was honestly won: Kane worked for five years in operations, technical marketing, and developer relations at a number of infrastructure companies in the San Francisco Bay Area.

Often frustrated by the unexamined assumptions of her industry and irritated by the incompetence of her managers, she began blogging about technology culture and management dysfunction at startups, which led to Model View Culture (the name is a play on a technology, familiar to software developers, used to create user interfaces), founded a year ago. Why are there so few women in many tech companies? Lessons every startup can learn from Uber - B2B News Network. Sales Teams Are Making a Big Comeback at Tech Firms. Salespeople have had a bad reputation in Silicon Valley. 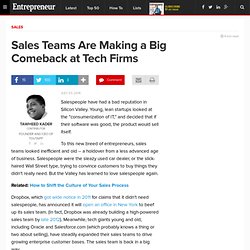 Young, lean startups looked at the “consumerization of IT,” and decided that if their software was good, the product would sell itself. To this new breed of entrepreneurs, sales teams looked inefficient and old -- a holdover from a less advanced age of business. Salespeople were the sleazy used car dealer, or the slick-haired Wall Street type, trying to convince customers to buy things they didn’t really need. But the Valley has learned to love salespeople again. Related: How to Shift the Culture of Your Sales Process. Vintage Silicon Valley Photos. Vintage Silicon Valley Photos. Internet trends 2014. What is disruption? I’ve been making a point in my journey as a writer for Econsultancy to investigate the many and varied terms in digital that I don’t understand. 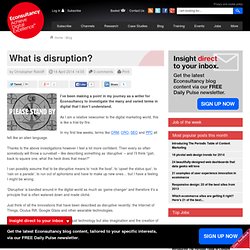 Hyper-Growth Done Right - Lessons From the Man Who Scaled Engineering at Dropbox and Facebook. Technology’s Man Problem. Photo Elissa Shevinsky can pinpoint the moment when she felt that she no longer belonged. 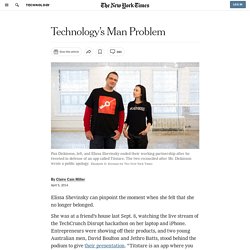 She was at a friend’s house last Sept. 8, watching the live stream of the TechCrunch Disrupt hackathon on her laptop and iPhone. Entrepreneurs were showing off their products, and two young Australian men, David Boulton and Jethro Batts, stood behind the podium to give their presentation. “Titstare is an app where you take photos of yourself staring at tits,” Mr. Boulton began, as photographs of women’s chests on a cellphone flashed on the screen behind him.

After some banter, Mr. The crowd — overwhelmingly young, white, hoodie-wearing men — guffawed. Ms. Continue reading the main story Women hold only about one-quarter of all. Why I Don't Want My Daughter to Work in Silicon Valley. Do we want a tech world defined by compassionless jerks?

I've written before about the toxicity of the Silicon Valley/San Francisco cult of "disruption," which has no empathy for the disrupted, and little place for any empathy at all. But my hackles were raised again by a BusinessWeek review of venture capitalist Ben Horowitz's new book, which confirmed that Silicon Valley's power brokers are passionately devoted to creating a society at war with itself. The issue came up again with the departure of Julie Ann Horvath from Github, just the latest Silicon Valley bullying saga. Silicon's Valley's Brutal Ageism.

“I have more botox in me than any ten people,” Dr. 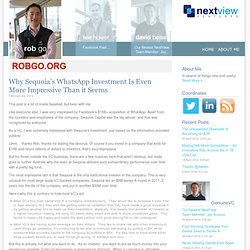 Like everyone else, I was very impressed by Facebook’s $16B+ acquisition of WhatApp. Apart from the founders and employees of the company, Sequoia Capital was the big winner, and that was recognized by everyone. The Brain Hacks Top Founders Use to Get the Job Done. Why Bitcoin Matters. Keith Bedford/ReutersMarc Andreessen, a co-founder of the venture capital firm Andreessen Horowitz. 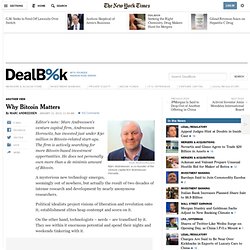 Editor’s note: Marc Andreessen’s venture capital firm, Andreessen Horowitz, has invested just under $50 million in Bitcoin-related start-ups. The firm is actively searching for more Bitcoin-based investment opportunities. He does not personally own more than a de minimis amount of Bitcoin. A mysterious new technology emerges, seemingly out of nowhere, but actually the result of two decades of intense research and development by nearly anonymous researchers.

Political idealists project visions of liberation and revolution onto it; establishment elites heap contempt and scorn on it. Gender Diversity at Silicon Valley Public Companies 2013. Editor’s Note: The following post comes to us from David A. 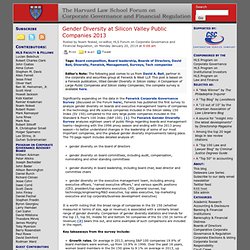 Tech startups: A Cambrian moment. You Don’t Have to Be in Silicon Valley to Build the Next Great Internet Company - Walter Frick. “There’s no question that there are two Americas,” Steve Case, AOL founder turned VC and entrepreneurship advocate, told me in an interview last week. “There’s the America where entrepreneurship is celebrated and supported. Places like Silicon Valley and Boston. Business development for startups 2013. What’s Your $1 Billion Idea? - Doug Sundheim. By Doug Sundheim | 1:00 PM January 13, 2014 Anyone would be inspired by the story of Nick Woodman, the CEO of GoPro, a $2.5B company that makes wearable HD video cameras.

Silicon Chasm. In other words, what is coming is the “new feudalism,” a phrase coined by Chapman University urban studies professor Joel Kotkin, a prolific media presence whose New Geography website is an outlet for the trend’s most vocal critics. “It’s a weird Upstairs, Downstairs world in which there’s the gentry, and the role for everybody else is to be their servants,” Kotkin said in a telephone interview.

“The agenda of the gentry is to force the working class to live in apartments for the rest of their lives and be serfs. The Seven Deadly Sins of Startup Storytelling. The Ultimate Guide to Startup Marketing. Fight Like You're Right, Listen Like You're Wrong and Other Keys to Great Management. Top Hacks from a PM Behind Two of Tech's Hottest Products. All Is Fair in Love and Twitter. “The idea for Twitter?” The interviewer asked him. “Yep,” Dorsey replied. In Silicon Valley, ideas are not in short supply.

Why Most Startups Don't 'Get' Press. What Everyone Should Know About How Talent is Bought and Sold. When Big Companies Support Start-ups, Both Make More Money - Sramana Mitra. By Sramana Mitra | 11:00 AM September 23, 2013. Micro-failures and the future of marketing. There is a seismic shift occurring in marketing as startups, for various reasons, are forced to discover new ways to grow their user bases. Boorish Behavior by Techies? There's No App for That. The Goldilocks Effect: Why Silicon Valley is No Longer ‘Just Right’ For years, startup founders have flocked to Silicon Valley to build companies with idyllic dreams of large rounds of funding and huge exits.

Startup Brand Strategy: An Investment Priority. .@ThomRuhe: Jargon - The Most Pervasive, Pernicious Offense - The Accelerators. .@neilblumenthal: Don't Underinvest in Branding - The Accelerators. Robert Scoble: Building Your Startup In The Silicon Valley - Business Insider. What I've Learned By Leading A Startup. Startup Tools. Startup Tools. One Entrepreneur's Favorite Start-Up Tools. Sarah Allen: Blazing The Trail For Female Programmers : All Tech Considered : NPR. How to Be Startup CEO - The Startup Guide - Building a Better World Through Entrepreneurship. The iContact Team in October 2011. The Next, and Overlooked, VC Opportunity: The Middle East - Christopher M. Schroeder.

By Christopher M. Schroeder | 9:00 AM April 17, 2013 Venture capital is ignoring the Middle East for all the wrong reasons. Entrepreneurs '13 : Speakers. Stop Reinventing Disruption - Maxwell Wessel. Why Your (Billionaire) CEO Should Not Run PR: Tesla vs. The New York Times. How Retail Startup Nomi Raised $3 Million In 13 Days. The Real Story Of Apple’s ‘Think Different’ Campaign. Growing Numbers of Start-Ups Are Worth a Billion Dollars. 6 Startup Lessons From Designers At Pinterest, Fuseproject, And Behance. 2013 Prediction: The Unstoppable Rise Of Corporate Media ... And The Deflationary Spiral Of All Media Content. Instagram Rings its Own Death Knell and Leaps to the Mainstream. What makes for a great entrepreneur?

Special Report: Silicon Valley's dirty secret - age bias. Five Self-Defeating Behaviors that Ruin Companies and Careers - Rosabeth Moss Kanter. John Hagel Keynote Speaker Bio - KEYNOTES.ORG. Silicon Valley is stupid (which is why it works) Why I got Fired from Facebook (a $100 Million dollar lesson) Business Intelligence (BI) Trends Go Beyond Analytics. VCs and Start-Ups Pin Their Hopes on Pinterest - Venture Capital Dispatch. Simon Doonan to Mark Zuckerberg: Stop Dressing Like You're Living Under Communist Opression. This Time, the Geeks Should Listen to Hollywood. Mary Meeker's Latest Incredibly Insightful Presentation About The State Of The Web. “In the Studio,” How Bizeebee’s Poornima Vijayashanker Fell in Love with Building Software. Forbes Writer Warns Sheryl Sandberg To Keep Her Head Down So She Doesn't End Up A Has-Been. Do You Want the Good News First? Early Startup Time Wasters. The Jig Is Up: Time to Get Past Facebook and Invent a New Future - Alexis Madrigal.

Building It Is Not Enough: 5 Practical Tips On User Acquisition. Kickstarter Sets Off $7 Million Stampede for a Watch Not Yet Made. The Age of the Female-Centric Startup. Connections with Integrity. Australia Unlimited. Disruptions: The Sloshing Sound of Tech Valuations. Salesforce's happy workforce. Women need more role models, tech leaders tell CES panel.

Related:  Telling your story   -  Google+   -  Marc Andreessen on Why Software Is Eating the World   -  Is there a new bubble in Silicon Valley?   -  Silicon Valley   -  Silicon Valley   -  Swat Valley/Pakistan/Taliban   -  Indus Valley Civilization - Wikipedia, the free encyclopedia   -  Microsoft handed the NSA access to encrypted messages | World | The Guardian   -  The NSA Uses Powerful Toolbox in Effort to Spy on Global Networks - SPIEGEL ONLINE   -  Catalog Reveals NSA Has Back Doors for Numerous Devices   -  The top secret rules that allow NSA to use US data without a warrant | US news | The Guardian   -  Edward Snowden: Here's how we take back the Internet | Talk Video | TED.com   -  USA TODAY: Latest World and US News - USATODAY.com   -  Education   -  Enterprise