Pakistan to hang 'butcher of Swat' Muslim Khan. Image copyright AFP A military court in Pakistan has sentenced a top Pakistani Taliban leader from the Swat region to death. 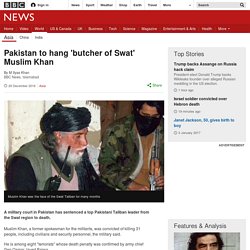 Muslim Khan, a former spokesman for the militants, was convicted of killing 31 people, including civilians and security personnel, the military said. He is among eight "terrorists" whose death penalty was confirmed by army chief Gen Qamar Javed Bajwa. The military courts were set up in the aftermath of the 2014 Peshawar school massacre.

Their term expires next week. Others whose convictions were confirmed by the army chief on Wednesday include four gunmen sentenced for involvement in a 2015 bus massacre of Ismaili Shias in Karachi, and the assassination of social activist Sabeen Mahmud, also in Karachi the same year. Why 'butcher of Swat'? In 2007, he became the chief spokesman of the Swat Taliban, and was the movement's public face during its stranglehold over the region which continued until the winter of 2009. Was the trial fair? Image copyright Reuters. The attrocious Dec 16 APS attack and its aftermath. Last Updated On 17 December,2016 10:24 am The incident also transformed the political scenario of the country PESHAWAR (Web Desk) - Rightly two years ago from today, an incident unfolded that could outrightly be called as one of the darkest days in mankind’s history. 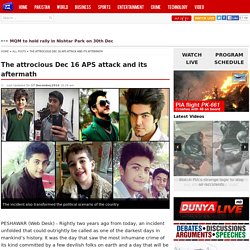 It was the day that saw the most inhumane crime of its kind committed by a few devilish folks on earth and a day that will be remembered for the most spineless massacre in modern history. The massacre that took away the lives of more than 150 people, most of them schoolchildren on December 16, 2014 was something never heard of and sorrowful reactions pouring from all the corners revealed how barbaric this bloodshed was. The then British Prime Minister, David Cameron’s reaction describes the brutality of this attack. Pakistan: Taliban extorting money from traders in Swat Valley. Taliban militants in Pakistan are reportedly demanding money from local traders in Swat Valley, raising fears that jihadists might make a comeback into the region that they once partially controlled. 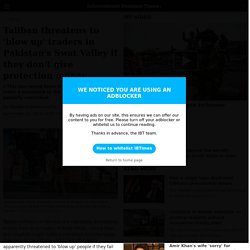 The group apparently threatened to 'blow up' people if they fail to provide the protection money. According to a Reuters report, Abdur Rahim, a shopkeeper and the president of Swat Traders' Federation, received a phone call from Mullah Akhtar, a commander close to Tehreek-e-Taliban Pakistan (TTP) chief Mullah Fazlullah, ordering him to collect money from 15,000 members. When Rahim refused to oblige, Akhtar reportedly replied in fit of rage: "I will blow you up, so that even the doctors won't be able to find the pieces.

" Some of the traders have support Rahim's stand to not fund the militants, however, some seem to be divided. Extortion Seen as 1st Step towards Taliban Comeback in Pakistan's Swat Valley - ASHARQ AL-AWSAT English. Mingora, Pakistan- When Pakistani shopkeeper Abdur Rahim’s phone rang in mid-October, he was shocked to hear the voice of a senior militant commander demanding protection money from him and his fellow traders in the Swat Valley. 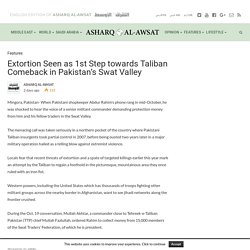 The menacing call was taken seriously in a northern pocket of the country where Pakistani Taliban insurgents took partial control in 2007, before being ousted two years later in a major military operation hailed as a telling blow against extremist violence. Locals fear that recent threats of extortion and a spate of targeted killings earlier this year mark an attempt by the Taliban to regain a foothold in the picturesque, mountainous area they once ruled with an iron fist. Wall of kindness set up in Swat - Newspaper - DAWN.COM. MINGORA: After witnessing its usefulness to fulfil needs of poor people in Peshawar, Lahore and Karachi, a wall of Kindness was established in Swat to serve needy people in the district. 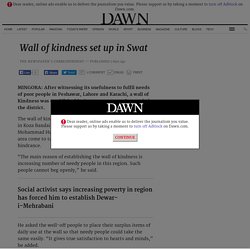 The wall of kindness or Dewar-i-Mehrabani has been set up in Koza Bandai village of Kabal tehsil by a social worker Dr Mohammad Hussain where needy people of the surrounding area come to take items and stuff of their needs without any hindrance. “The main reason of establishing the wall of kindness is increasing number of needy people in this region. Such people cannot beg openly,” he said.

Social activist says increasing poverty in region has forced him to establish Dewar-i-Mehrabani He asked the well-off people to place their surplus items of daily use at the wall so that needy people could take the same easily. Donald Trump’s Phone Conversation With the Leader of Pakistan Was Reckless and Bizarre. Pakistan Police Academy Attack May Signal New ISIS Alliance. A suicide squad killed more than 59 cadets and guards in Quetta on Monday night as jihadist groups under pressure start working together. 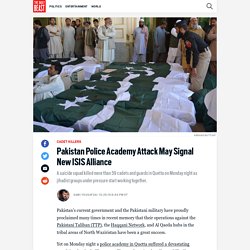 Pakistan’s current government and the Pakistani military have proudly proclaimed many times in recent memory that their operations against the Pakistani Taliban (TTP), the Haqqani Network, and Al Qaeda hubs in the tribal areas of North Waziristan have been a great success. Yet on Monday night a police academy in Quetta suffered a devastating attack in what looks like a new alliance of previously splintered jihadist factions in possible coordination with the so-called Islamic State. Three terrorists wearing suicide vests hit late in the evening and engaged in a protracted gun battle before one was killed by government force and the other two blew themselves up. Pakistan Reels After Attack on Police Training College Leaves 61 Dead. Pakistan law cracks down on 'honor killings' Pakistan passed a law Thursday to clamp down on honor killings The law came after a surge of recent high-profile killings of young women by family members prompted international outrage Under previous law, killers could go unpunished if they were granted forgiveness by relatives. 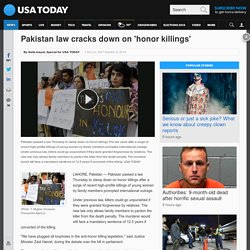 The new law only allows family members to pardon the killer from the death penalty. The murderer would still face a mandatory sentence of 12.5 years if convicted of the killing. USA TODAY. Civilians: The Ultimate Victims of the Af-Pak Proxy War. The blame game playing out between Afghanistan and Pakistan only benefits militants threatening both sides. 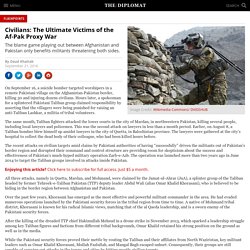 By Daud Khattak for The Diplomat September 21, 2016 On September 16, a suicide bomber targeted worshipers in a remote Pakistani village on the Afghanistan-Pakistan border, killing 30 and injuring dozens civilians. Hours later, a spokesman for a splintered Pakistani Taliban group claimed responsibility by asserting that the villagers were being punished for raising an anti-Taliban Lashkar, a militia of tribal volunteers. The same month, Taliban fighters attacked the lower courts in the city of Mardan, in northwestern Pakistan, killing several people, including local lawyers and policemen.

Enjoying this article? Over the past few years, Khorasani has emerged as the most effective and powerful militant commander in the area. Why Was A Prominent Muslim Musician Gunned Down In Pakistan? Relatives comfort Mujjudid Sabri (front, center), son of Pakistani singer Amjad Sabri, who was killed Wednesday in an attack by gunmen in Karachi. 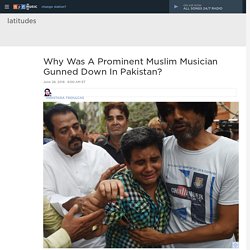 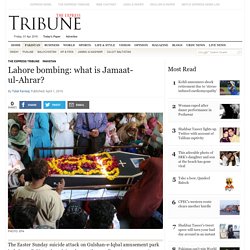 A rescue services spokeswoman confirmed that at least 29 children, seven women and 34 men were killed and more than 300 were wounded. On the fateful day, the popular resort was crowded with people marking Easter. Who is the Pakistan Taliban? (CNN) —The Pakistan Taliban, a violent group also known as the TTP, claims a long list of violent and deadly assaults on civilians and the military in Pakistan's mostly ungoverned area along its Afghan border. A breakaway faction calling itself Jamaat Ul Ahrar is taking responsibility for Sunday's suicide bombing at a park in Lahore which left at least 74 people dead and at least 362 injured.

Led by a commander named Omar Khorasani, the splinter group is believed to have sheltered al Qaeda leader Ayman al-Zawahiri, says Michael Kugelman is the senior associate for South Asia at the Woodrow Wilson International Center for Scholars. Khorasani has also reportedly threatened to seize Pakistan's nuclear weapons and his atrocities include beheading 23 Pakistani soldiers. Pakistan explosion death toll rises to 60. Holy fathers…the search for relevance. Islamabad diary The assorted alliance of holy fathers – various religious outfits subscribing to their own brands of irrelevance – have held out a threat to the Punjab government to withdraw or suitably amend the women’s protection law recently passed by the Punjab Assembly or face the consequences. Some clerics, more imaginative than their colleagues, smell a conspiracy to turn Pakistan into a secular republic. If only this were true this would be something to celebrate. Mullah Fazlullah wounded in Afghanistan Dispatch News Desk.

Mullah Fazlullah wounded in Afghanistan Monitoring Desk: The head of Tehrik Taliban of Pakistan (TTP) Mullah Fazlullah was wounded in a road accident inside Afghanistan while traveling from Kunar province to Nuristan when his twin cabin skidded from the road and hit a rock. According to Eurasian media outlets, Fazulullah had an accident near Wama close to Pech river.

Media reports indicate that unconfirmed reports came from Wama area Afghanistan that vehicle of Mullah Fazlullah skidded and hit rocks. Reports maintain that he was wounded along with his two accompanies and was immediately shifted to undisclosed location. However, Afghan authorities are yet to confirm such reports. A Russian newspaper reported on Friday that a local news agency while citing an eye witness said that his vehicle was high speed and it skid and hit rocks. Islamicide: How the Mullah Mafia Is Destroying Pakistan. A boy cuts off his own right hand because it offended God. Pedophilia is holy. To question is to risk execution. Welcome to a nation in thrall to suicidal fanaticism. Pakistan Taliban chief Mullah Fazlullah reportedly killed in Afghanistan. File photo of Mullah Fazlullah. (Photo courtesy: Dawn.com) Tehrik-e-Taliban Pakistan (TTP) chief Mullah Fazlullah alias Radio Mullah was reportedly killed in a drone strike in Afghanistan's Nangarhar province, Pakistani media reported on late Monday evening.

Since 2010, this is the third time that the death of Fazlullah the mastermind of the Peshawar school attack has emerged. According to unconfirmed reports, at least five people, including Fazlullah, his wife and his son, were killed in a drone strike carried out on the Pakistan Taliban chief's house in Afghanistan on Monday evening. Attack at Bacha Khan University in Pakistan Leaves at Least 22 Dead. Muslim cleric arrested in Pakistan for inciting teenager to saw off hand.

Pakistani Taliban suicide bomber detonates at polio vaccination center. Pakistan executes four militants over massacre of 134 children. ‘New Pakistan’ refers to transformation of system: Imran Khan. Pakistan Sentences 10 to Life Terms Over 2012 Attack on Malala Yousafzai. Continue reading the main story Video ISLAMABAD, Pakistan — A Pakistani court on Thursday sentenced 10 men to life in prison for their role in the 2012 shooting of Malala Yousafzai, the teenage Nobel laureate who defied the with her calls for girls’ education and won worldwide acclaim for her courage.