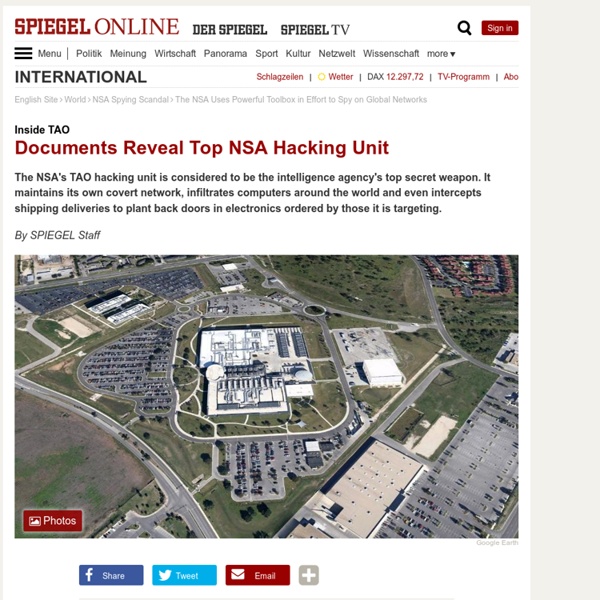 In January 2010, numerous homeowners in San Antonio, Texas, stood baffled in front of their closed garage doors. They wanted to drive to work or head off to do their grocery shopping, but their garage door openers had gone dead, leaving them stranded. No matter how many times they pressed the buttons, the doors didn't budge. The problem primarily affected residents in the western part of the city, around Military Drive and the interstate highway known as Loop 410. In the United States, a country of cars and commuters, the mysterious garage door problem quickly became an issue for local politicians. It was thanks to the garage door opener episode that Texans learned just how far the NSA's work had encroached upon their daily lives. On-Call Digital Plumbers According to internal NSA documents viewed by SPIEGEL, these on-call digital plumbers are involved in many sensitive operations conducted by American intelligence agencies. A Unit Born of the Internet Recruiting the Geeks

iSpy: Latest report says NSA has backdoor access to iPhones The last (we think) NSA spying revelation of the year is a doozy: The agency reportedly has had backdoor access to Apple’s iPhone. Security researcher Jacob Applebaum said Monday at a presentation in Germany that the spying agency can, among other things, intercept iPhone texts, voicemails, contact lists, and activate the phone’s microphone and camera. All this is enabled by implanted software called DROPOUTJEEP, according to leaked NSA documents dated October 2008 — so it’s unclear whether the access continues. As we wrote yesterday, Applebaum and German magazine Der Spiegel revealed the many things the elite hacking units of the NSA can do, and apparently exploiting the iPhone is one of them. Applebaum also raised a big question: He said that because the NSA claims a 100 percent success rate in putting spyware on iOS devices, he wonders what part Apple plays in it. It’s just another example of a Silicon Valley company being on the defensive. Levi Sumagaysay (3552 Posts)

Keeping Up Appearances Keeping Up Appearances In an article I read recently that was written by Arthur Schlesinger in 1947, he quoted D. W. "change anything except the appearance of things" In the decade preceding the New Millennium, with the "redesign" of our government by Bill Clinton and Al Gore, the signing of the NAFTA agreement in 1993 and the Marrakesh Agreement in 1994 to create the WTO, everything changed except for the appearance of things. The United Nations likes to name decades by the mission they intend to focus on. Definition of GLOBALIZATION : the act or process of globalizing : the state of being globalized; especially : the development of an increasingly integrated global economy marked especially by free trade, free flow of capital, and the tapping of cheaper foreign labor markets Here is how I define GLOBALIZATION: By all appearances, not much has changed in our government except for the Department of Homescam Security. On May 2, 1990, Senator David L.

About the Museum · International Spy Museum The International Spy Museum opened in Washington, DC on July 19, 2002. It is the only public museum in the United States solely dedicated to espionage and the only one in the world to provide a global perspective on an all-but-invisible profession that has shaped history and continues to have a significant impact on world events. The Museum features the largest collection of international espionage artifacts ever placed on public display. The mission of the International Spy Museum is to educate the public about espionage in an engaging way and to provide a context that fosters understanding of its important role in and impact on current and historic events. Multimedia Gallery Explore our multimedia gallery for audio and video on the latest programs and exclusive insider interviews with experts on espionage. Learn More

Pa. town latest to force drivers over and ask for cheek swabs for federal study Police in at least two cities have been accused of coercing drivers to pull over so a federal contractor could ask them questions and for a swab of their saliva. (AP) Drivers in a southeastern Pennsylvania town were forced off a local street and into a parking lot, so a federal contractor – aided by local police --could quiz them about their road habits and ask for a cheek swab, in a replay of an incident last month in Texas. The checkpoint, in downtown Reading, was one of several conducted by the Pacific Institute for Research and Evaluation, which was hired by the National Highway Traffic Safety Administration and the White House Office of National Drug Control Policy. "I feel this incident is a gross abuse of power on many levels "I feel this incident is a gross abuse of power on many levels," Reading resident Ricardo Nieves told City Council Monday, three days after being stopped. "In the grand scheme of things, I think it's a pretty innocuous and minor issue," Heim said.

Texas Police Ask Drivers for Blood Samples, Secretly Test Those Who Refuse (Source: OneTruth4Life/YouTube) NHTSA said the study is valuable for justifying new laws to put more mildly intoxicated drivers in prison Police in Fort Worth, Texas (the fifth largest city in the nation's second most populous state) raised the mother of all controversies when they set up a roadblock and began to make bizarre requests of motorists -- most of whom appeared to be entirely law abiding. I. Fort Worth Medical Samples -- Voluntary or Police Seizure? The Fort Worth Police Department (FWPD) installed the roadblock north of the city during daytime traffic. It just doesn't seem right that you can be forced off the road when you're not doing anything wrong. They were asking for cheek swabs. She received no money and only consented to participate because she said she felt trapped. We are reviewing the actions of all police personnel involved to ensure that FWPD policies and procedures were followed. You can't just be pulled over randomly or for no reason. III. IV. "What would I do?

Secret U.S. court approved wider NSA spying even after finding excesses Weather Warfare: Beware the US Military’s Experiments with Climatic Warfare This article was first published by The Ecologist in December 2007. I summarizes several in-depth and detailed articles written by the author on the HAARP program. The debate on climate change does not acknowledge the role of climatic warfare, namely the deliberate manipulation of climate for military use. “HAARP is a weapon of mass destruction, capable of destabilising agricultural and ecological systems globally.” Rarely acknowledged in the debate on global climate change, the world’s weather can now be modified as part of a new generation of sophisticated electromagnetic weapons. Environmental modification techniques have been applied by the US military for more than half a century. The US military has developed advanced capabilities that enable it selectively to alter weather patterns. Military analysts are mute on the subject. The HAARP Programme HAARP Program, Alaska HAARP array of antennas Physicist Dr Bernard Eastlund called it ‘the largest ionospheric heater ever built’.

UN Pushes Population Control Agenda The United Nations has openly proclaimed that the world’s increasing population is a cause for concern. Likewise, the UN has advocated for its Agenda 21 program that seeks to bring about “sustainable development.” On February 10, The New American’s William Jasper wrote of Agenda 21: The UN’s Agenda 21 is definitely comprehensive and global — breathtakingly so. Agenda 21 is yet another means to achieve ultimate control. A United Nations resolution adopted by the UN General Assembly specifically designed to implement Agenda 21 reads: …. population growth rates have been declining globally, largely as a result of expanded basic education and health care. Likewise, the March 2009 U.N. The same theme was prevalent in the 2009 World Population Report released by the United Nations Population Fund entitled “Facing a Changing World: Women, Population and Climate.” Many of our own lawmakers and members of the Obama administration have openly called for population control. Fortunately, the U.S.

New NSA Spying Info on Project Code Named ‘Stellar Wind’: Collected Data Akin to a ‘Real-Time Map of Your Brain’ One of the early NSA whistleblowers, William Binney, detailed to Wired last year about the agency’s domestic surveillance program dubbed “Stellar Wind,” making it the first time anyone had gone on record to talk about it. Now, more details about the project’s history are emerging as part of the continuing deluge of information leaked to the U.K.’s the Guardian, including that the program operated for two years under the Obama administration before being discontinued. A supporter of NSA leaker Edward Snowden holds a picture of U.S president Obama and Chinese reads “Say No To Persecutor” during a demonstration outside the Consulate General of the United States in Hong Kong Saturday, June 15, 2013 as they accused the U.S. government of infringing people’s rights and privacy. TheBlaze reported Binney revealing to Wired last year that Stellar Wind not only involved spying on phone calls but emails as well. Here’s some of what Wired wrote of Binney’s account: The project began under George W.