Edward Snowden: Here's how we take back the Internet 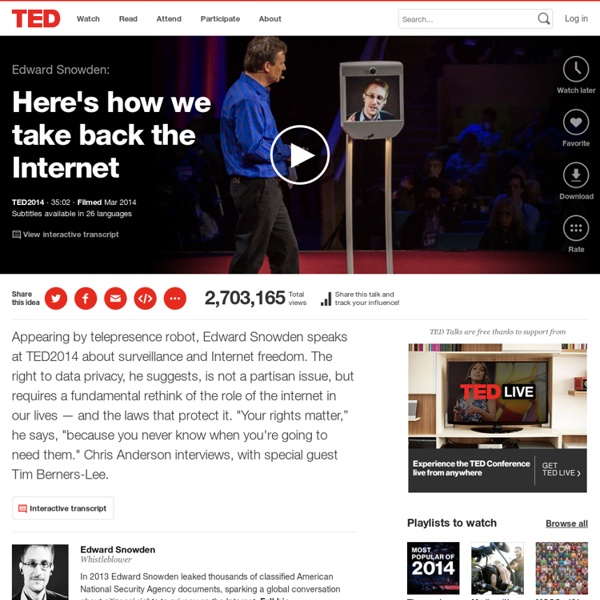 Snowden: UK government now leaking documents about itself | Glenn Greenwald (Updated below) The Independent this morning published an article - which it repeatedly claims comes from "documents obtained from the NSA by Edward Snowden" - disclosing that "Britain runs a secret internet-monitoring station in the Middle East to intercept and process vast quantities of emails, telephone calls and web traffic on behalf of Western intelligence agencies." This is the first time the Independent has published any revelations purportedly from the NSA documents, and it's the type of disclosure which journalists working directly with NSA whistleblower Edward Snowden have thus far avoided. That leads to the obvious question: who is the source for this disclosure? I have never spoken with, worked with, or provided any journalistic materials to the Independent. One other matter about the Independent article: it strongly suggests that there is some agreement in place to restrict the Guardian's ongoing reporting about the NSA documents. Related question

CloudFlare Watch Open Wireless Movement Internet access is a basic human right: A Q&A with Keren Elazari Keren Elazari speaks at TED2014. The day she gave her talk, we spoke to her about the shutdown of Twitter in Turkey. Photo: James Duncan Davidson Two weeks ago, hours after Turkish prime minister Recep Tayyip Erdoğan vowed to “wipe out” Twitter, his government blocked access to the platform across the country. It was just weeks before a hotly contended election, and Erdoğan was upset about tweets accusing him of corruption. Other governments have also tried to block access to parts or all of the Internet in the past, including Egypt’s Internet shutdown in January 2011 and Syria’s in May 2013. In her talk, Elazari said that hackers play an essential role in giving power, or free access to information, back to the people when governments try to take it away. So what’s really going on in Turkey? While Egypt had Tahrir Square and other places around the world had other social uprisings and revolutions, in Istanbul it happened in Taksim Gezi Park. But they’re still trying. Definitely.

Why I, a founder of PLOS, am forsaking open access I co-founded the Public Library of Science (PLOS) in 2002 because I believed deeply that the open access publishing model PLOS espoused and has come to dominate was good for science, scientists and the public. Over the past decade open access has become a personal crusade – my own religion – one I have fervently promoted here on this blog, on social media, and to thousands of colleagues at meetings and social engagements. To back up my commitment to open access, since 2000, I have exclusively published papers from my lab in open access journals, and have urged – some might say hectored and harassed – my colleagues to do the same. But in the last few weeks I have had a major change of heart. The most immediate reason is that, to be honest, I’m jealous. It used to be cool to publish in PLOS. But now those t-shirts are ratty, and PLOS has become The Man. And who’s to say what’s right anyway. As these were landmark studies, most were published in the highest profile subscription journals.

Lavabit--Snowden’s Secure Email Service--Is Gone: Here's Why UPDATE: On Tuesday, August 13, Ladar Levison made his first public appearance since he announced the shut down of Lavabit. In a 20-minute interview with Democracy Now!'s Amy Goodman and Aaron Maté, Levison explained more of his philosophy in creating the secure email service in the wake of the birth of the Patriot Act, but stopped himself (and was stopped by his lawyer, Jesse Binnall) from elaborating on the specific laws that limited him from sharing details about the governmental request he received. Levison also commented on Lavabit’s connection to Edward Snowden, confirming that an email address attached to Snowden’s name was registered with his service. Binnall added that Levison’s decision to even speak to media was an incredibly tenuous balancing act with serious consequences. At points in which the conversation steered toward specific laws, Levison stopped himself. Levison, who launched the service in 2004, created Lavabit for privacy-conscious email users.

rot rot.js: ROguelike Toolkit in JavaScript #################### #.............##...# #.............##...# - GitHub #............D##.?. Open Crypto Audit Project 8 math talks to blow your mind Mathematics gets down to work in these talks, breathing life and logic into everyday problems. Prepare for math puzzlers both solved and unsolvable, and even some still waiting for solutions. Ron Eglash: The fractals at the heart of African designs When Ron Eglash first saw an aerial photo of an African village, he couldn’t rest until he knew — were the fractals in the layout of the village a coincidence, or were the forces of mathematics and culture colliding in unexpected ways? Here, he tells of his travels around the continent in search of an answer. How big is infinity? There are more whole numbers than there are even numbers … right? Arthur Benjamin does “Mathemagic” A whole team of calculators is no match for Arthur Benjamin, as he does astounding mental math in the blink of an eye. Scott Rickard: The beautiful math behind the ugliest music What makes a piece of music beautiful?

After Edward Snowden's revelations, why trust US cloud providers? | Technology | The Observer 'It's an ill bird," runs the adage, "that fouls its own nest." Cue the US National Security Agency (NSA), which, we now know, has been busily doing this for quite a while. As the Edward Snowden revelations tumbled out, the scale of the fouling slowly began to dawn on us. Outside of the United States, for example, people suddenly began to have doubts about the wisdom of entrusting their confidential data to cloud services operated by American companies on American soil. Which providers? The second own goal (or unintended consequence, to give it its technical name) came from the revelation that the NSA had cracked or circumvented the encryption systems used by internet companies, banks and other organisations to persuade consumers that online transactions could be confidential and secure. I'll bet it was. That's why the discovery that the NSA abused that kind of trust is so depressing. Which brings us back to birds and their nests.

Israel buys most oil smuggled from ISIS territory - report Kurdish and Turkish smugglers are transporting oil from ISIS controlled territory in Syria and Iraq and selling it to Israel, according to several reports in the Arab and Russian media. An estimated 20,000-40,000 barrels of oil are produced daily in ISIS controlled territory generating $1-1.5 million daily profit for the terrorist organization. The oil is extracted from Dir A-Zur in Syria and two fields in Iraq and transported to the Kurdish city of Zakhu in a triangle of land near the borders of Syria, Iraq and Turkey. Israeli and Turkish mediators come to the city and when prices are agreed, the oil is smuggled to the Turkish city of Silop marked as originating from Kurdish regions of Iraq and sold for $15-18 per barrel (WTI and Brent Crude currently sell for $41 and $45 per barrel) to the Israeli mediator, a man in his 50s with dual Greek-Israeli citizenship known as Dr. Farid. “Israel has in one way or another become the main marketer of ISIS oil. Comments Your comment

How to Deploy HTTPS Correctly By Chris Palmer and Yan Zhu Originally published on 15 Nov 2010. Revised on 12 Dec 2013. Internet technologists have always known that HTTP is insecure, causing many risks to users. While HTTPS has long existed as the bare minimum for web security, some websites have been slow to adopt it. This article is designed to encourage and assist website operators in implementing and improving HTTPS support. Background HTTPS provides three security guarantees: Server authentication allows users to have some confidence that they are talking to the true application server. HTTP provides no security guarantees, and applications that use it cannot possibly provide users any security. Modes of Attack and Defense However users connect to the Internet, there are a variety of people who can attack them--whether spying on them, impersonating them, tampering with their communications, or all three of these. Mixed Content You must serve the entire application domain over HTTPS. Security and Cookies Conclusion

Mr. Snowden says:
"Don't give up your rights! Protect yourself & crypt any page you write or keep on the web...!
Who knows how an NSA agent, in a few years from now, might interpret your emails, messages, notes or researches on your PC web?"
HE IS RIGHT!!
Hold your breath, he promised that there are more "releases" to come!!
Can't wait for it! by topoletta Mar 20