A Taxonomy of Software Consultants - DaedTech. The conversation that follows this paragraph is a dramatization. 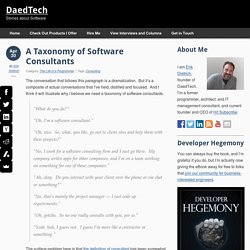 But it’s a composite of actual conversations that I’ve held, distilled and focused. And I think it will illustrate why I believe we need a taxonomy of software consultants. “What do you do?” How to Build a Great Series A Pitch and Deck: Series A. As YC’s Series A Program Manager, my job is to help YC founders raise their Series As. 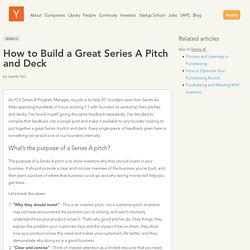 After spending hundreds of hours working 1:1 with founders to workshop their pitches and decks, I’ve found myself giving the same feedback repeatedly. I’ve decided to compile that feedback into a single post and make it available to any founder looking to put together a great Series A pitch and deck. Every single piece of feedback given here is something we’ve told one of our founders internally. SlidesCarnival: Best Free PPT Templates and Google Slides Themes. Créer et déclarer un organisme de formation : TOUT SAVOIR. How Coronavirus Will Disrupt Future Colleges & Universities. Photo-Illustration: Joe Darrow In 2017, Scott Galloway anticipated Amazon’s $13.7 billion purchase of Whole Foods a month before it was announced. 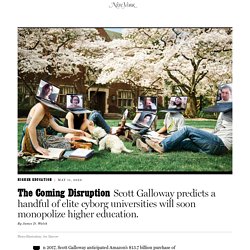 Last year, he called WeWork on its “seriously loco” $47 billion valuation a month before the company’s IPO imploded. Now, Galloway, a Silicon Valley runaway who teaches marketing at NYU Stern School of Business, believes the pandemic has greased the wheels for big tech’s entrée into higher education. The post-pandemic future, he says, will entail partnerships between the largest tech companies in the world and elite universities.

My First Year as a Freelance AI Engineer. Introduction This week marks my one-year anniversary of quitting my full-time job and becoming an independent NLP/ML engineer and researcher (which I just call “freelance AI engineer” below). 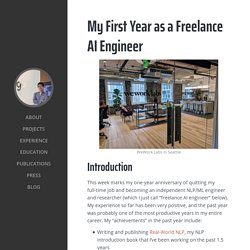 My experience so far has been very positive, and the past year was probably one of the most productive years in my entire career. My “achievements” in the past year include: How to Find Consulting Clients. Chris Achard November 07, 2019 If you're considering a move into freelancing or consulting - the one question that's probably on your mind is: "How will I find clients? 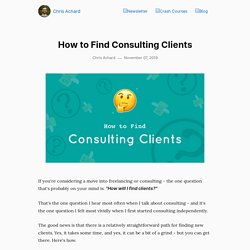 " That's the one question I hear most often when I talk about consulting - and it's the one question I felt most vividly when I first started consulting independently. The good news is that there is a relatively straightforward path for finding new clients. Lessons from Six Years as a Solo Consultant. The beginning of this month marked my sixth anniversary of becoming a solo consultant. 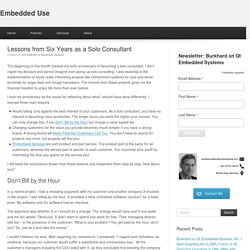 I don’t regret my decision and cannot imagine ever giving up solo consulting. I was essential in the implementation of some really interesting projects like infotainment systems for cars and driver terminals for sugar beet and forage harvesters. WaterfallProcess. In the software world, “waterfall” is commonly used to describe a style of software process, one that contrasts with the ideas of iterative, or agile styles. 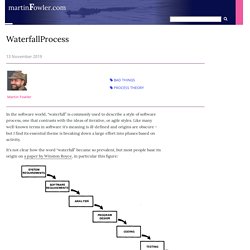 Like many well-known terms in software it's meaning is ill-defined and origins are obscure - but I find its essential theme is breaking down a large effort into phases based on activity. It's not clear how the word “waterfall” became so prevalent, but most people base its origin on a paper by Winston Royce, in particular this figure: Although this paper seems to be universally acknowledged as the source of the notion of waterfall (based on the shape of the downward cascade of tasks), the term “waterfall” never appears in the paper.

It's not clear how the name appeared later. Three Sales Mistakes Software Engineers Make. Everybody is selling something. 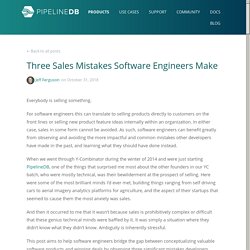 For software engineers this can translate to selling products directly to customers on the front lines or selling new product feature ideas internally within an organization. In either case, sales in some form cannot be avoided. As such, software engineers can benefit greatly from observing and avoiding the more impactful and common mistakes other developers have made in the past, and learning what they should have done instead. When we went through Y-Combinator during the winter of 2014 and were just starting PipelineDB, one of the things that surprised me most about the other founders in our YC batch, who were mostly technical, was their bewilderment at the prospect of selling.

Here were some of the most brilliant minds I’d ever met, building things ranging from self driving cars to aerial imagery analytics platforms for agriculture, and the aspect of their startups that seemed to cause them the most anxiety was sales. How to Find Consulting Clients. Le guide complet pour décrocher le poste dont vous rêvez (à l’aide de Trello) The_Entrepreneurs_Roadmap. Advice for First Time Founders. We operate a platform called Bookface for YC founders to connect with each other, ask questions, find intros, and share advice. 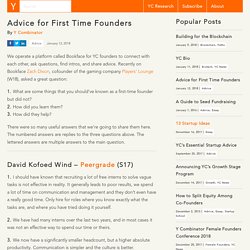 Recently on Bookface Zach Dixon, cofounder of the gaming company Players’ Lounge (W18), asked a great question: 1. Growing One's Consulting Business. Clients Pay For Value, Not For Time A few years ago, I was a much-put-upon grunt programmer at a large Japanese megacorp. 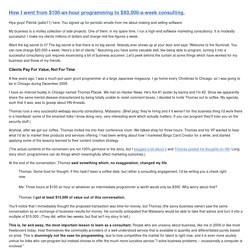 I go home every Christmas to Chicago, so I was going to be in Chicago during December 2009. I have an Internet buddy in Chicago named Thomas Ptacek. 16 Lessons Learned Bootstrapping Kinsta from 0 to 7-Figure in Revenue. We’ve been asked a lot by our clients over the years why Kinsta was born, how we started it, and how we got to the level at which we are now. Each company and startup has its own unique story, and personally, I love to read them because I always find a few hidden gems, tips, and how-tos we can use and apply to our own business.

This article is about the lessons we learned during our bootstrapping journey, and how we turned our startup into a 7-figure business. Some of our decisions turned out to be great, while others cost us a lot of money and time. But I want to show you that it’s possible to build a profitable SaaS business even if you don’t have any connections, resources, or money. For those of you who have successfully bootstrapped a business from the ground up, some parts of this post will sound familiar and you’ll probably relate to what I’m talking about. The Side Project Marketing Checklist. Business questions engineers should ask when interviewing at ML/AI companies. A few folks have been asking me if such-and-such would be good AI/ML company to work at. If you’re a data scientist or engineer and are considering a job, here are some interesting questions to ask during the interview. Note: these are focused on the business, not the technology.

Why does anyone need this? Une myriade de méthodes d'organisation pour vos projets personnels. I got tired of boilerplate entrepreneurship blogs. Here’s what I started reading instead. Comment se détendre pour travailler efficacement? Tour d’horizon des EdTech en France avec 180 startups. What’s the Second Job of a Startup CEO? Successful startups go through three broad phases as they scale, and a startup CEO’s job changes dramatically in each phase. A CEO’s first job is to build a product users love; the second job is to build a company to maximize the opportunity that the product has surfaced; and the third is to harvest the profits of the core business to invest in transformative new product ideas.

This blog post describes how to become a great Phase 2 CEO by focusing on the highest leverage tasks that only the CEO can accomplish. As YC’s Continuity team, we’ve seen many Phase 1 CEOs transition successfully into Phase 2, and some who have not. The future of your startup depends on which kind you are. How we structure our work and teams at Basecamp – Signal v. Noise. THE ULTIMATE FRENCH VC LIST. The list below is intended for tech start-ups — medtech and biotech start-ups are a totally different thing. It’s designed to be 100% practical and down to earth. Why are we sharing this list? - Serena Capital is a VC firm founded by entrepreneurs, and we feel compelled to bring value to the ecosystem: raising a round is never easy, and we hope that this list will help some of you in this process- Also, we would love it if this could help the founders of other European countries to get to know the French investors better (London is not the only way!)

Ready? The Quick and Dirty Guide to Validating Your Startup Idea – The Startup – Medium. Step 1: Have an in-depth understanding of the problem Most startup ideas come from an observation of a pain point that is personal to the entrepreneur. Therefore, it is easy for entrepreneurs to fall in love with their ideas and dive into “solution-land” immediately without making the effort to understand the full scope of the problem. Is Pay What You Want Pricing for You? Pavel Penev's Blog. LeanPub experiences, and my own ebook store « blather.michaelwlucas.com.

A Brief History of the World (of Venture Capital) — Welcome to TheFamily. Tools to Help You Track Your Startup. The Deactivation of the American Worker. The Premium Model in EdTech: Aggregators — Startups & Venture Capital. These 39 Sites Have Amazing Stock Photos You Can Use For Free — Vantage. Millions of Teachers Minting Millionaire Teachers — Bright.