What Is Life? Is Death Real? Crown Shyness: A Peculiar Natural Phenomenon.

Fantastically Wrong: What Darwin Really Screwed Up About Evolution. It’s hard to overstate just how brilliant and huge an idea Charles Darwin’s theory of evolution by natural selection was and continues to be. 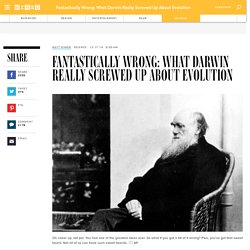 It absolutely rocked Victorian England, to the extent that stuffy old Victorian England could be rocked past people just barely raising their voices in polite protest. But some folks, particularly highly religious types, weren’t too happy with the idea that nature can run perfectly fine on its own, without the guiding hand of a higher power. Not happy in the least bit. More Fantastically Wrong Science But contrary to popular belief today, scientists were kicking around the idea of evolution before Darwin—even Charles’ grandpa, Erasmus, alluded to it in verse, like a true OG.

There was a bit of a problem with all of this natural selection stuff, though: Darwin didn’t know how it, uh, worked. Why are there gay, lesbian, and bisexual people? We know now that homosexuality is connected to genetics — and there's probably more than one gene involved.

But why would that trait have been selected for strongly enough to make it present in 5-to-15 percent of the population? At The Conversation, geneticist Jenny Graves presents an interesting theory that I'd never heard before. Homosexuality is evolutionarily adaptive, according to this idea, because the same genes that give you women who love women and men who love men also give you men who love women and women who love men. In fact, Graves suggests, it's better to think of these genes as "male loving" and "female loving" rather than "gay" or "lesbian" or "straight". Scientists snap a picture of DNA’s double helix for the very first time. 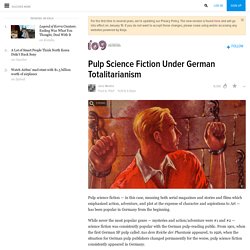 Join us as we explore the diverse interpretations of beginnings – from scientific examples such as stem cells to first time experiences such as publishing your first paper. The first cloned animals were cloned over a century ago. Clone really just means copy. 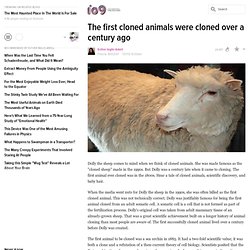 When an organism has identical genes to the original. This post is written in a font made of DNA. Ten Things You Probably Didn't Know About DNA. XNA is synthetic DNA that's stronger than the real thing. But scientists have been synthesizing XNA molecules for well over a decade. 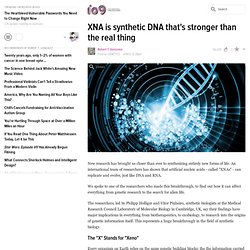 Your link appears not to be a link, but certainly PNAs (peptide nucleic acids - not really nucleic acids, but still ...) and GNAs (glycol nucleic acids) have been documented since the early '90s, so, yes, considerably more than a decade. "Overall, this leads to high cost and a high failure rate for potential therapies - there is still only a single licenced [nucleic acid-based] drug on the market (Macugen). 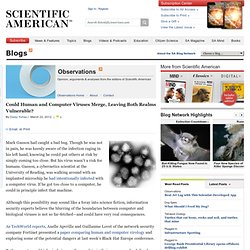 Though he was not in pain, he was keenly aware of the infection raging in his left hand, knowing he could put others at risk by simply coming too close. But his virus wasn’t a risk for humans.

Alan Turing's 60-Year-Old Prediction About Patterns in Nature Proven True. The Oldest Living Trees in the World. Diversity by Design. Did Sex Emerge from Cannibalism? Sex, Death and Kefir, by Lynn Margulis (1938&#150;2011) Editor's note: This essay, by renowned evolutionary biologist Lynn Margulis, was published in the August 1994 issue of Scientific American with the title, "Sex, Death and Kefir. 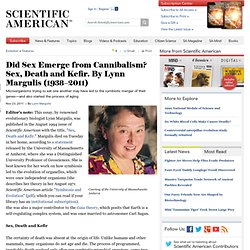 " Margulis died on Tuesday in her home, according to a statement released by the University of Massachusetts at Amherst, where she was a Distinguished University Professor of Geosciences. She is best known for her work on how symbiosis led to the evolution of organelles, which were once independent organisms (she describes her theory in her August 1971 Scientific American article "Symbiosis and Evolution" (pdf), which you can read if your library has an institutional subscription). She was also a major contributor to the Gaia theory, which posits that Earth is a self-regulating complex system, and was once married to astronomer Carl Sagan.

Sex, Death and Kefir. 2012 August 21 - DNA: The Molecule that Defines You. Molecular Visualizations of DNA - Original High Quality Version. Longevity Shown for First Time to Be Inherited via a Non-DNA Mechanism. In October 2009 Stanford University geneticist Anne Brunet was sitting in her office when graduate student Eric Greer came to her with a slightly heretical question. 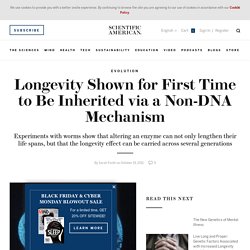 Brunet's lab had recently learned that they could lengthen a worm's lifetime by manipulating levels of an enzyme called SET2. "What if extending a worm's lifetime using SET2 can affect the life span of its descendants, even if the descendants have normal amounts of the enzyme? " Lions and Tigers Bear Vocal Cords for Roars: Scientific American Podcast. For many potential entrée animals this [sound of lion roar] is one of the scariest sounds around. 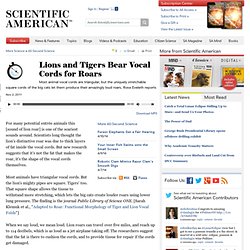 Scientists long thought the lion’s distinctive roar was due to thick layers of fat inside the vocal cords. But new research suggests that it's not the fat that makes the roar, it's the shape of the vocal cords themselves. Most animals have triangular vocal cords. Stunning Images Under the Microscope Capture the Lives of the Tiniest Creatures [Slide Show]

Evolution: The Rise of Complexity. Let’s rewind time back about 3.5 billion years. 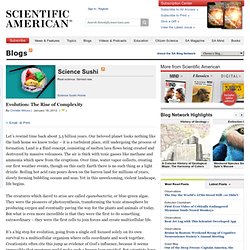 Details of the process, which can be improved and patented, are published in the current issue of the Proceedings of the National Academy of Sciences. Lennart Nilsson Photography. Pictures of the day: 1 December 2011. Evolution World Tour: Galápagos Islands, Ecuador. Before DNA, before RNA: Life in the hodge-podge world - life - 08 January 2012.

How I became we, which became I again. Most life on Earth exists as single cells. Mammals Made By Viruses. If not for a virus, none of us would ever be born. In 2000, a team of Boston scientists discovered a peculiar gene in the human genome. DNA Barcoding Goes Mainstream. By Mark Brown, Wired UK This week, more than 450 scientists and industry experts are to converge upon Australia’s University of Adelaide, for the fourth International Barcode of Life Conference.

8 Things You Won't Believe Plants Do When No One's Looking. #4. VI. EVOLUTION GOING ON. Evolution, as we have seen in a previous chapter, is another word for race-history. It means the ceaseless process of Becoming, linking generation to generation of living creatures. Alan Turing's Patterns in Nature, and Beyond. Mini Motion: Award-Winning Microscope Videos. Meet the ancestor of all living things on Earth. Can a venus flytrap digest human flesh? Timeline: The evolution of life - life - 14 July 2009. Read full article. Behold, the future's bioluminescent billboards. Biological clock began ticking 2.5 billion years ago - life - 16 May 2012. Drew Berry: Animations of unseeable biology. Meet the molecule responsible for giving Earth all of its oxygen. Blonde hair evolved independently in Pacific islands - life - 03 May 2012. Watch this team of scientists make a lion roar. Oh, and did I mention the lion is dead?

A plausible end-of-the-world scenario you've probably never thought of. Why Albino Animals Aren't Always White (And Non-Albino Animals Are) Why we evolved two nostrils (hint: it's all about domination) For the first time in 75 years, an entire genus of mammal is on the brink of extinction. Whoa, a Petri Dish That Has a Pulse. A Microbe Metropolis. Nature Under Glass: Gallery of Victorian Microscope Slides. Life began with a planetary mega-organism - life - 25 November 2011. How does reproductive cloning work? Is it possible to reanimate the dead? Can dead people be brought back to life? Anti-Gravity Machine for Levitating Fruit Flies. Climate Change & Animal Body Size. Life on Earth began in . . . Greenland!? Ancient Plants Resurrected from Siberian Permafrost. Scientists confirm Alan Turing's 60-year-old theory for why tigers have stripes. Zoology & Animal behaviour.