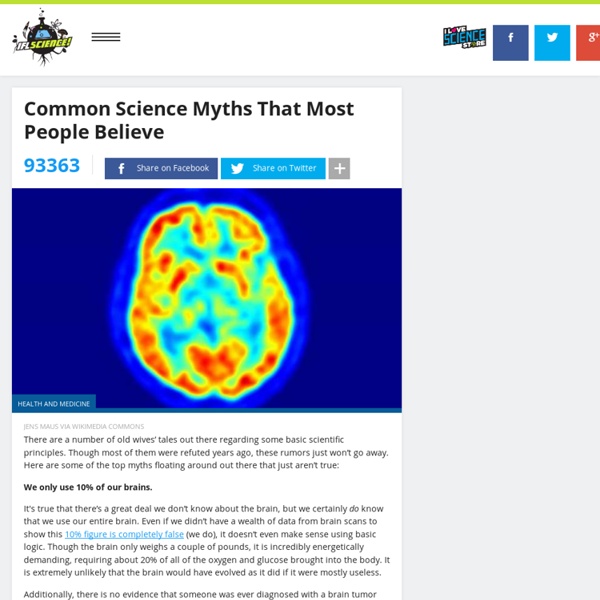 There are a number of old wives’ tales out there regarding some basic scientific principles. Though most of them were refuted years ago, these rumors just won’t go away. Here are some of the top myths floating around out there that just aren’t true: We only use 10% of our brains. It's true that there’s a great deal we don’t know about the brain, but we certainly do know that we use our entire brain. Even if we didn’t have a wealth of data from brain scans to show this 10% figure is completely false (we do), it doesn’t even make sense using basic logic. Additionally, there is no evidence that someone was ever diagnosed with a brain tumor but was told: “Great news! While you might not be using every bit of your brain at all times, but you do use the entire brain over the course of the day. There is a dark side of the moon. Oh, Pink Floyd, how you have led us all astray. From our perspective on Earth, we are able to view about 59% of the moon’s surface (though not all at the same time). Related:  Sexy Science • science explains world • Science

Six Foods That Increase Or Decrease Your Risk Of Cancer If you believe cancer is a disease that strikes from nowhere with little in your control to prevent it, you’d be mistaken on both counts. Most cases of cancer are considered preventable by positive nutrition and lifestyle choices. A healthy weight, a healthy diet, exercise and reducing your intake of alcohol and/or tobacco all make a huge difference to your chances of developing cancer. Six new nutrition cancer prevention guidelines published today in the Journal of the American College of Nutrition reinforce some sound advice, but also include a surprise or two. Cancer is a big killer of Australians, and is responsible for 30% of all deaths each year. The “big five” in order of incidence are prostate, bowel, breast, melanoma and lung cancer. So what do these six new cancer prevention recommendations tell us? 1. Unfortunately, there is no “cancer prevention superfood”; it is a combination of food variety that gives the greatest benefit. Why are fruit and vegetables so good? 2. 3+4. 5. 6.

New evidence that plants get their energy using quantum entanglement The fact that biological systems can exploit quantum effects is quite astounding. No it is not, not even remotely.There is literally no possible way that photosynthesis could take place without involving quantum physics. This particular exploit is really neat, of course, but far too much as been made of how mystical or ungraspable quantum physics is. Basic chemistry is defined by quantum physics. The distinction being made is that toast-making was just as explicable with continuous waves of energy being absorbed by the bread but that no such classical interpretation is possible for these new photosynthesis observations. Right? Yeah, it's always easy to come in after someone's done the hard research and go "Oh, pff. Or, you can sit back and let people admire how wild our Universe is and just how little we know about it. well now why havent all the people working on this already aware of this? To think you are wasting all that genius writing on here! sort of like cells : animals

101 science and health myths debunked Step Aside Google Image Search, Here’s an Algorithm that Knows What’s in a Picture The internet is a wealth of information. But you have to know what you’re looking for. If you only know a basic category—like that weird looking modern chair at your buddy’s office—not so good. Search modern chair and prepare to be bombarded with general definitions of chairs or the history of chairs or a mishmash of unlabeled chair pictures. Really what you want are all the specific variations of chairs, browsable by image, so you can recognize your target with a quick scan. A team of scientists from the University of Washington and the Allen Institute for Artificial Intelligence is developing a program that teaches itself all there is to know about a concept and presents the findings in pictures and phrases. To study a concept, LEVAN scans millions of books and images online. “It is all about discovering associations between textual and visual data,” said Ali Farhadi, a UW assistant professor of computer science and engineering. Image Credit: LEVAN/YouTube

Pseudoscience Examples Pseudoscience In short, pseudoscience may be called false science. The term is used to describe something that may be reported or recorded as a product or real science, but actually there is no connection to proper scientific methodology and cannot be proven realistically. True science uses a particular methodology to conduct research. Often, television dramas and plots are based on pseudoscience. Examples of Pseudoscience: 1. Aliens may have visited the Earth and influenced civilization or created the crop circles, even though there is no empirical evidence existing. 2. Pseudoscience is used to try and prove that the original moon landing did not happen or that the Earth is flat and disc-shaped. 3. A common belief in society today that says the alignment of the celestial bodies have some effect on the behavior or future of a person's life. 4. A lie detector test or a polygraph is considered to be pseudoscience because it cannot prove a lie or truth. 5. 6.

Scientist Invents Ice Cream That Changes Color As You Lick It Your childhood dreams of being Charlie Bucket are coming one step closer to reality thanks to physicist turned Willy Wonka, Manuel Linares, who has invented an ice cream that changes color as you lick it. Linares developed a passion for ice cream and pursued a “Masters Diploma in Creating Artisan Ice Cream,” (seriously? That exists? No one told us…). Marrying gelato ardor with his scientific background, Linares set out to develop an ice cream that changes color when exposed to temperature changes and varying acidities found in the human mouth. Linares is obviously keeping his cards very close to his chest as his formula is patent-pending. Some have speculated that the color changing ability might be due to the varieties of fruit used in the ice cream, alongside a spritz that Linares has dubbed a “love elixir” which is squirted onto the dessert before you eat it. Gif credit: Sploid He does not intend his chameleon adventure to end here, though. [Via Phys.org and Sploid]

Warp Drive More Possible Than Thought, Scientists Say HOUSTON — A warp drive to achieve faster-than-light travel — a concept popularized in television's Star Trek — may not be as unrealistic as once thought, scientists say. A warp drive would manipulate space-time itself to move a starship, taking advantage of a loophole in the laws of physics that prevent anything from moving faster than light. A concept for a real-life warp drive was suggested in 1994 by Mexican physicist Miguel Alcubierre; however, subsequent calculations found that such a device would require prohibitive amounts of energy. Now physicists say that adjustments can be made to the proposed warp drive that would enable it to run on significantly less energy, potentially bringing the idea back from the realm of science fiction into science. "There is hope," Harold "Sonny" White of NASA's Johnson Space Center said here Friday (Sept. 14) at the 100 Year Starship Symposium, a meeting to discuss the challenges of interstellar spaceflight. Warping space-time Laboratory tests

The teenage brain | Science News for Students It’s not easy being a teenager. The teen years can play out like a choose-your-own-adventure novel, where everyday temptations lead to tough decisions. What if I took that big jump on my bike? What’s the worst thing that could happen if I snuck out after curfew? Teenagers must act on an endless parade of choices. So what makes the teenager’s brain so complex? The evolved teenager If you have ever thought that the choices teenagers make are all about exploring and pushing limits, you are on to something. For example, laboratory experiments show that young mice stay close by their mothers for safety. As a developmental cognitive neuroscientist, Luna studies those changes that occur in the brain as children develop into adults. Jackpot! What really goes on in a teenager’s brain? Eveline Crone is a psychologist at Leiden University in the Netherlands who studies how the brain develops. A young boy prepares to enter a magnetic resonance imaging (MRI) scanner. Beatriz Luna Tug-of-war B.J.

Google Science Fair 2014 Finalists Announced Google has announce the 15 finalists for the 2014 Google Science Fair. If you’re not familiar with the program, it is an online science fair for students aged 13-18 around the globe. This isn’t just a bunch of kids making baking soda volcanos or dropping Mentos into Diet Coke: these young scientists are doing real research that can actually improve the world around them. In addition to the prestige of winning such a competitive international science fair, the grand prize winner will receive a $50,000 scholarship, spend 10 days in the Galapagos Islands from National Geographic Expeditions, a behind-the-scenes tour of Virgin Galactic Spaceport, a prize pack from LEGO, and one of three experiences offered by LEGO, NatGeo, and Google. The winner’s school will receive $10,000 for computers or lab equipment as well as one year access to Scientific American. Even if a project doesn’t take the grand prize, there are other awards available as well. 13-14 Age Category 15-16 Age Category

Can we grow a stronger-than-steel 'wonder material' to save the world? It’s stiffer than Kevlar, thinner than paper, and in a few years, it may be mass-produced using only sunlight and water. Scientists in the US this week announced a new, and potentially groundbreaking method for producing nanocellulose — a so-called "wonder material" derived from tree fiber that could be used to create ultra-thin displays, lightweight body armor, and a wide range of other products. Their key ingredient? Algae. "one of the most important discoveries in plant biology" Dr. At the core of Brown's research is a family of bacteria that produce vinegar, Kombucha tea, and nata de coco. Brown's method, by contrast, is vastly more efficient and environmentally friendly, requiring only sunlight, water, and algae. Organic, self-sustaining factories These genetically-altered algae, known as cyanobacteria, are entirely self-sustaining. The team is currently working on synthesizing a more complete and stable form of the material, though their progress is already promising.

Choice Logic and emotion aren't the only forces that guide our decisions. This hour of Radiolab, we turn up the volume on the voices in our heads, and try to make sense of the babble. Forget free will, some important decisions could come down to a steaming cup of coffee. UPDATE: The Williams & Bargh Yale coffee study "Experiencing Physical Warmth Promotes Interpersonal Warmth" was replicated in 2014 by researchers at three different universities, Kenyon College, Michigan State University, and University of Manchester. They did not observe the same results as in the original study.