Biden Turns Attention to $2 Trillion Infrastructure Bill Now That COVID Stimulus Is Out Of The Way. After Congress passes a $1.9 trillion coronavirus stimulus package, President Joe Biden is expected to start building support around an infrastructure package that will create jobs and modernize the nation's crumbling transportation system. 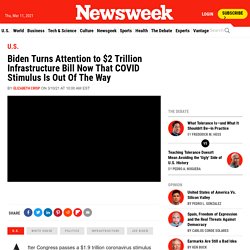 The White House has downplayed the plans, which would build on former President Barack Obama's efforts to stimulate the economy through big-scale infrastructure projects, and instead redirected to the immediate needs of the stimulus, which was hashed out in negotiations between the Democrat-controlled U.S. House, Senate and White House this week. The House is expected to grant final approval on Wednesday, before lawmakers begin work on infrastructure projects, but it could be the next high-dollar plan from the new Biden administration. 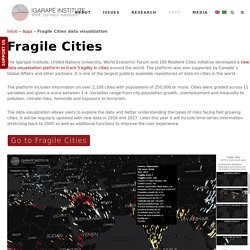 The platform was also supported by Canada´s Global Affairs and other partners. It is one of the largest publicly available repositories of data on cities in the world. The platform includes information on over 2,100 cities with populations of 250,000 or more. Cities were graded across 11 variables and given a score between 1-4. Variables range from city population growth, unemployment and inequality to pollution, climate risks, homicide and exposure to terrorism. What makes a city ‘fragile’? There’s a lot of talk in cities today about building “resilience” against disasters, social strife and economic shocks. 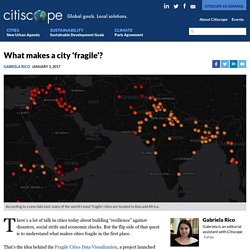 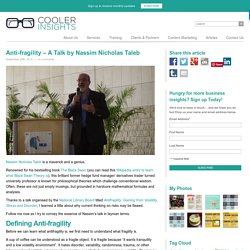 Renowned for his bestselling book The Black Swan (you can read this Wikipedia entry to learn what Black Swan Theory is), this brilliant former hedge fund manager/ derivatives trader turned university professor is known for philosophical theories which challenge conventional wisdom. Often, these are not just empty musings, but grounded in hardcore mathematical formulas and analyses. Thanks to a talk organised by the National Library Board titled Antifragility: Gaining from Volatility, Stress and Disorder, I learned a little about why current thinking on risks may be flawed. Follow me now as I try to convey the essence of Nassim’s talk in layman terms. Before we can learn what antifragility is, we first need to understand what fragility is. A cup of coffee can be understood as a fragile object. Cities and antifragility.

There are quite a few reviewers at Amazon who enjoyed and appreciated Taleb's Antifragile. 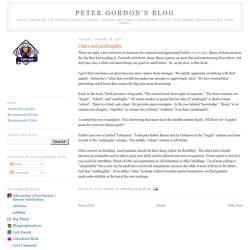 Many of them mention the fun they had reading it. Factoids everwhere. Some dinner guests are more fun and entertaining than others, but they may stay a while and most things are good in small doses. So, in my view, is this book. Nassim Taleb: A Definition of Antifragile and its Implications. Building Anti-Fragile Cities—A PrimerMESH Cities. Have our aspirations for sustainable, livable cities of tomorrow been burned to the ground? 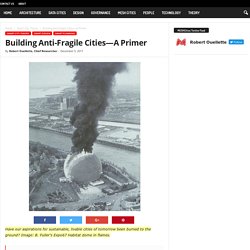 Image: B. Antifragile: How to Live in a World We Don't Understand by Nassim Nicholas Taleb – review. The core idea behind this book is simple and quite enticing. 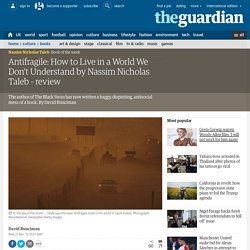 Urban Fragility: The Big Picture - United Nations University Centre for Policy Research. In January 2017, Robert Muggah, Research Director at the Igarapé Institute, presented the results of a data visualisation that tracks key risks driving fragility across over 2,100 cities at the World Economic Forum (WEF) in Davos (watch a video of the presentation above). 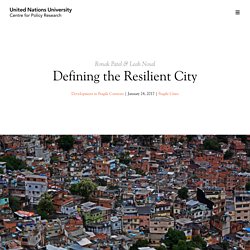 The full note is available here. This background note is part of the United Nations University project on Resilience and the Fragile City and is meant to complement the paper ‘Conceptualizing City Fragility and Resilience’ (de Boer, Muggah, Patel 2016) which formally presents the fragile and resilient cities assessment framework. As resilience has become a more prominent and pervasive concept, this paper explores its application for urban environments in contexts of fragility (i.e. urban zones characterized by complex crises that often involve high levels of violence, extreme poverty, and disaster simultaneously) (see de Boer 2015). Nassim Nicholas Taleb - The Black Swan: The Impact of the Highly Improbable. EVA - Explorable Visual Analytics.

Resilience and the Fragile City. Fragile cities: the epicentre of extreme vulnerability Over the past 40 years, the urban population in lower income and fragile countries has increased by an astonishing 326 per cent (IDMC 2014). 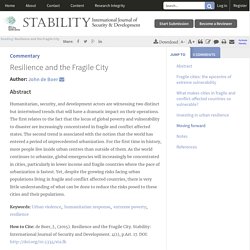 Continuing population growth and urbanization are projected to add another 2.5 billion people to the world’s urban population by 2050 and nearly 90 per cent of that increase will be concentrated in Asia and Africa. Some of the world’s most fragile and conflict-affected countries – including Angola, Cote d’Ivoire, Iraq, Mali, Sudan, and Uganda – are projected to add more than 20 million people to their urban populations while other already overburdened countries such as Bangladesh, the Democratic Republic of Congo, Pakistan, and Ethiopia will each see more than 50 million people flood into their cities. Urban Fragility: The Big Picture - United Nations University Centre for Policy Research.