Operant Conditioning: How does it influences behaviours of teenagers 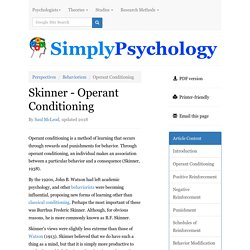 Through operant conditioning, an individual makes an association between a particular behavior and a consequence (Skinner, 1938). By the 1920s, John B. Watson had left academic psychology, and other behaviorists were becoming influential, proposing new forms of learning other than classical conditioning. Perhaps the most important of these was Burrhus Frederic Skinner. Summary: Reinforcement and Punishment. Reinforcement and punishment - A summary. The difference between classical and operant conditioning - Peggy Andover. Positive Punishment vs Negative Punishment. What is Positive Punishment? Parents' Use of Physical Punishment Increases Violent Behavior Among Youth.

Violent behavior is one of the leading causes of mortality among youth. 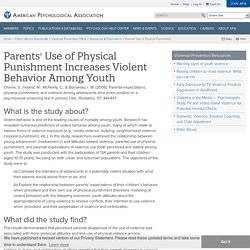 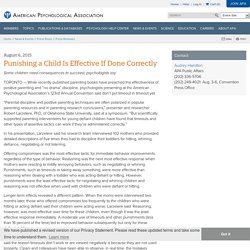 “Parental discipline and positive parenting techniques are often polarized in popular parenting resources and in parenting research conclusions,” presenter and researcher Robert Larzelere, PhD, of Oklahoma State University, said at a symposium. “But scientifically supported parenting interventions for young defiant children have found that timeouts and other types of assertive tactics can work if they’re administered correctly.” In his presentation, Larzelere said his research team interviewed 102 mothers who provided detailed descriptions of five times they had to discipline their toddlers for hitting, whining, defiance, negotiating or not listening. Longer-term effects revealed a different pattern. Presentations: Why you should stop yelling at your kids. The use of spanking to discipline children has been in decline for 50 years. 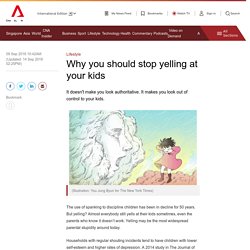 But yelling? Almost everybody still yells at their kids sometimes, even the parents who know it doesn’t work. Yelling may be the most widespread parental stupidity around today. Households with regular shouting incidents tend to have children with lower self-esteem and higher rates of depression. Rewarding behavior is key to parenting teens, study suggests. Parenting is hard, and parenting teens brings about an entirely new set of challenges, from keeping their rooms clean to getting them home before curfew. 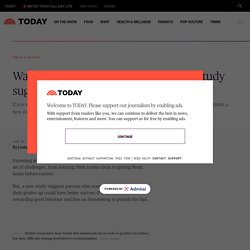 But, a new study suggests parents who want their teenagers to keep their grades up could have better success if they focus more on rewarding good behavior and less on threatening to punish the bad. According to the report, published in PLOS Computational Biology, British researchers have found that adolescents focus well on positive incentives, but have difficulty staying motivated to avoid penalties.

The study shows that teens and adults learn in different ways, according to the study’s lead author Stefano Palminteri, a researcher with the Institute of Cognitive Neuroscience at University College London. It suggests that “in some cases positive feedback may have more of an effect than negative feedback on learning” in adolescents. “Rewards give them something they want to think about,” Allen said. "When people go to work they get paid. What is Negative Reinforcement?

Does this look familiar? BYU Study: a need for positive reinforcement among teens. There are countless publications describing the best ways to raise a child in the hopes of them becoming successful adults. 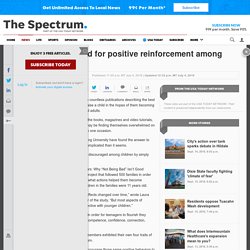 Between the books, magazines and video tutorials, parents may be finding themselves overwhelmed on more than one occasion. But a group of researchers at Brigham Young University have found the answer to helping children through life may be less complicated than it seems. The BYU study found bad behavior can be discouraged among children by simply encouraging good behavior. The study, Flourishing During the Teen Years: Why “Not Being Bad” Isn’t Good Enough, used information from a 10-year project that followed 500 families in order to see where the individuals struggled and what actions helped them become successful.

When the study began, the children in the families were 11 years old. “For this brief we didn’t look at how these effects changed over time,” wrote Laura Walker, BYU professor and lead researcher of the study. Popular stories. Teens May Learn Best with Positive Reinforcement. A new study finds that adolescents focus on rewards and are less able to learn to avoid punishment or consider the consequences of alternative actions. 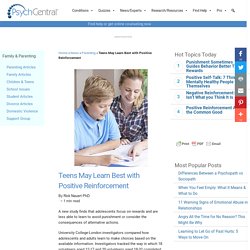 As the trial progressed, participants learned which symbols were likely to lead to each outcome and adjusted their choices accordingly. How reinforcement may work in real life. References.

Related:  Shaping Teenagers' Behaviours   -  Using 'Reinforcement' and 'Punishment' to influence the behaviour of teenage children   -  The difference between classical and operant conditioning - Peggy Andover   -  What is Positive Punishment?   -  Rewarding behavior is key to parenting teens, study suggests   -  What is Negative Reinforcement?   -  Teens May Learn Best with Positive Reinforcement   -  Education   -  Enterprise