History of the Earth: About. Natural Selection - Natural Selection, Evolution, Mutation. The Insect Predation Game: Evolving Prey Defenses and Predator Responses (Synopsis) What is the interplay between competition, predator-prey interactions, and sequential evolution of prey defenses and predator responses? 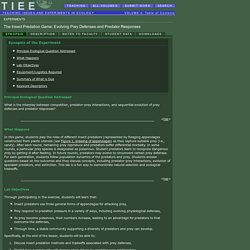 In this game, students play the roles of different insect predators (represented by foraging appendages constructed from plastic utensils (see Figure 1, drawing of appendages) as they capture suitable prey (i.e., candy). After each round, remaining prey reproduce and predators suffer differential mortality. In some rounds, a particular prey species is designated as poisonous. Student predators learn to recognize dangerous prey by getting ill after feeding.

In future rounds, predators may evolve to circumvent certain prey defenses. Natural Selection Game, by Michael Zito (model ID 3947) Do you have questions or comments about this model? 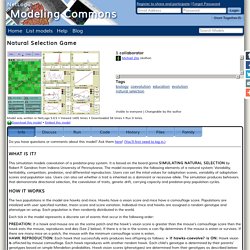 Ask them here! Big History Project: Humans. What Is The Great Story? "We must live as though we are setting the pattern for the future. 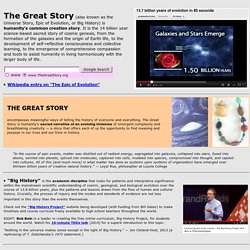 At any moment, we may be. How the present period of human inflation ends will determine whether the stable period that is coming will be dark and repressive or will nurture the human spirit. A voyage round the world. YouTube. About. Introduction Wikispaces Classroom is a social writing platform for education. 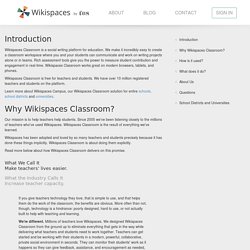 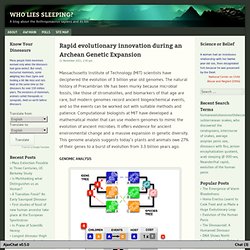 The natural history of Precambrian life has been murky because microbial fossils, like those of stromatolites, and biomarkers of that age are rare, but modern genomes record ancient biogeochemical events, and so the events can be worked out with suitable methods and patience. Computational biologists at MIT have developed a mathematical model that can use modern genomes to mimic the evolution of ancient microbes. It offers evidence for ancient environmental change and a massive expansion in genetic diversity. This genome analysis suggests today’s plants and animals owe 27% of their genes to a burst of evolution from 3.3 billion years ago.

Genomic Analysis Genenome Analysis: Reconciliation Method. Unpacking the past: Identifying a key evolutionary step in E. coli metabolism. (Phys.org) —Evolution is a process that takes place over long periods of time over which genetics and ecology may interact, producing novel phenotypic traits. 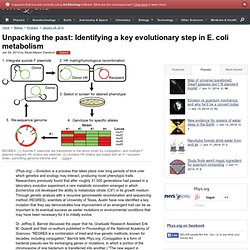 Researchers previously found that after roughly 31,500 generations had passed in a laboratory evolution experiment a rare metabolic innovation emerged in which Escherichia coli developed the ability to metabolize citrate (Cit+) in its growth medium. Through genetic analysis with a recursive genomewide recombination and sequencing method (REGRES), scientists at University of Texas, Austin have now identified a key mutation that they say demonstrates how improvement of an emergent trait can be as important to its eventual success as earlier mutations or environmental conditions that may have been necessary for it to initially evolve. Dr. Unraveling the Tree of Life. The Tree of Life: Tangled Roots and Sexy Shoots Tracing the genetic pathway from the Last Universal Common Ancestor to Homo sapiens Chris King - Genotype 1.2.8 - 4 Mar 2014 PDF Active site: Abstract: This article is a fully referenced research review to overview progress in unraveling the details of the evolutionary Tree of Life, from life's first occurrence in the hypothetical RNA-era, to humanity's own emergence and diversification, through migration and intermarriage, using research diagrams and brief discussion of the current state of the art, in response to summaries of some of these developments (Lawton 2009, Lane 2009). 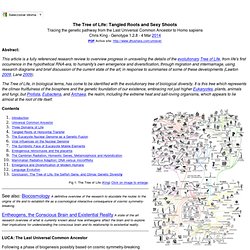 The Tree of Life, in biological terms, has come to be identified with the evolutionary tree of biological diversity. Contents. 'Parallel universe' of life in oceanic crust could be Earth's largest ecosystem. Deep beneath the ocean floor off the Pacific Northwest coast, scientists have described the existence of a potentially vast realm of life, one almost completely disconnected from the world above. 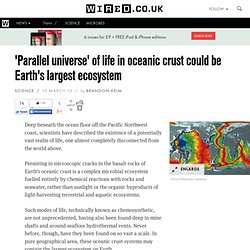 Persisting in microscopic cracks in the basalt rocks of Earth's oceanic crust is a complex microbial ecosystem fuelled entirely by chemical reactions with rocks and seawater, rather than sunlight or the organic byproducts of light-harvesting terrestrial and aquatic ecosystems. Mmbr.asm.org/content/75/2/361.full.pdf. Huge hidden biomass lives deep beneath the oceans - environment - 22 May 2008. 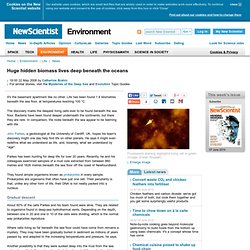 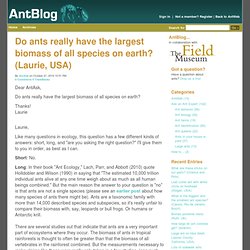 Thanks! Www.pnas.org/content/95/12/6578.full.pdf. Origins: Elizabeth Pennisi: September 2009 Archives. By Elizabeth Pennisi As social as humans are, their cooperative nature pales in comparison to that of ants, bees, wasps, and termites (see hill, left). Colonies of these insects can number in the millions and function seamlessly as “superorganisms.”

Event Science: Becoming the Messenger Limited to Institutions & Universities in Kansas--More workshops will be offered in other locations January 27, 2011 7:30 AM to January 27, 2011 6:00 PM The Oread, Lawrence View video The National Science Foundation (NSF) will be holding a workshop, "Science: Becoming the Messenger" on January 27, 2011, at The Oread near the campus of the University of Kansas in Lawrence. We are extending an invitation to principal investigators (PI), early career researchers and engineers, graduate students, postdocs, public information officers (PIO) and communications staff from institutions and universities in Kansas who would like to learn to communicate effectively to a broad audience. Today, across academia and the research community, there is a growing interest in science communication. PCR primer design: primers4clades tutorial. Welcome to the primers4clades (primers for clades) documentation and tutorial page.

This document explains how to use this tool and, more importantly, how to read the results. For a quick start try the tutorials, which are based on the provided demo sequences. They will provide a convenient overview of the server's user interface and capabilities. Feel free to contact us if you come accross bugs or find it difficult to understand the results. Population Reference Bureau. Gabe Zichermann. Science-based solutions to real-world problems in our community. Materials Science and Engineering. Darwin Online. Principles of Evolution, Ecology and Behavior. Syllabus Professor. Evolution of Evolution - 150 Years of Darwin's "On the Origin of Species"