Space exploration homework help. Construction of the International Space Station by Europe, Japan, Canada, Russia and the USA started in 1998 and is still going on today. 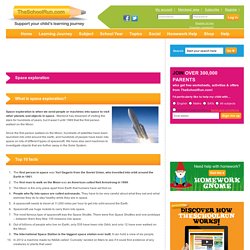 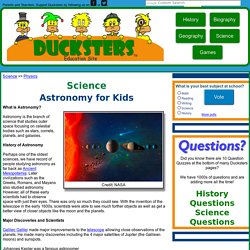 Astronomy is the branch of science that studies outer space focusing on celestial bodies such as stars, comets, planets, and galaxies. History of Astronomy Perhaps one of the oldest sciences, we have record of people studying astronomy as far back as Ancient Mesopotamia. Kids Ahead - Space Articles. History of Space Travel. Learn about space, kids information resource about space exploration, provided by www.spacekids.co.uk. Exploring Space. Cosmos4Kids.com: Exploration. Astronomy is the study of space. 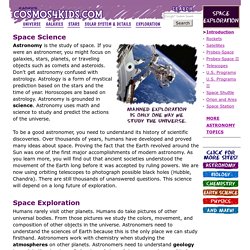 If you were an astronomer, you might focus on galaxies, stars, planets, or traveling objects such as comets and asteroids. Don't get astronomy confused with astrology. Astrology is a form of mystical prediction based on the stars and the time of year. Horoscopes are based on astrology. Astronomy is grounded in science. Kids' Club. ESA - Space for Kids - Life in Space - Space Exploration. For centuries, people dreamed about leaving Earth and travelling to other worlds. 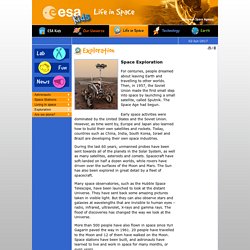 Then, in 1957, the Soviet Union made the first small step into space by launching a small satellite, called Sputnik. The Space Age had begun. The Solar System - Easy Science Facts for Kids About the Solar System. Space Travel Facts for Kids. A few hundred years ago, traveling over the Earth’s surface was a risky adventure. 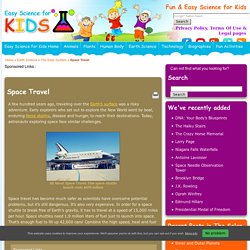