The End of Theory: The Data Deluge Makes the Scientific Method Obsolete 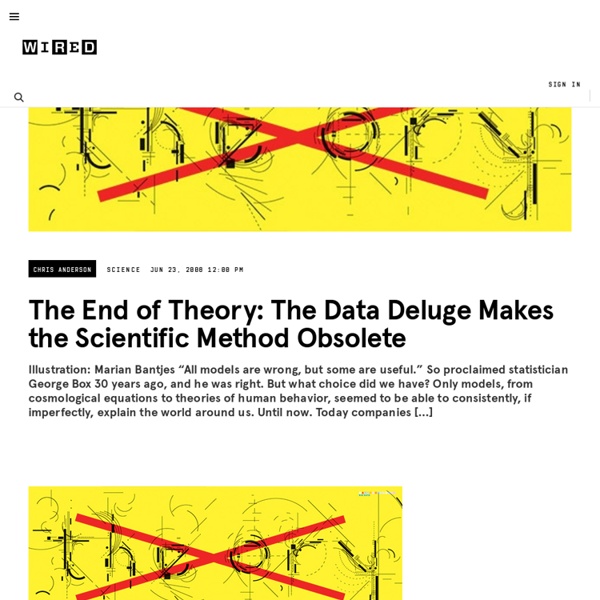 But faced with massive data, this approach to science — hypothesize, model, test — is becoming obsolete. Consider physics: Newtonian models were crude approximations of the truth (wrong at the atomic level, but still useful). A hundred years ago, statistically based quantum mechanics offered a better picture — but quantum mechanics is yet another model, and as such it, too, is flawed, no doubt a caricature of a more complex underlying reality. The reason physics has drifted into theoretical speculation about n-dimensional grand unified models over the past few decades (the "beautiful story" phase of a discipline starved of data) is that we don't know how to run the experiments that would falsify the hypotheses — the energies are too high, the accelerators too expensive, and so on. Now biology is heading in the same direction. In short, the more we learn about biology, the further we find ourselves from a model that can explain it. There is now a better way.

Solving Homelessness Through Good Design - Impact Hub As CEO of a shelter and infrastructure design studio with the vision of ending one of our biggest global challenges: homelessness, billionBricks founder Prasoon Kumar often recalls the following line from a famous poet: “…and miles to go before I sleep.”– Robert Frost Indeed, at times, the scope of the job seems insurmountable, with estimates of 1.6 billion people lacking adequate housing around the world and 78 million homeless in India alone. After the completion of billionBricks’ first project, a night shelter for 100 children sleeping on the streets of Mumbai, Prasoon realized the effort had only helped 0.0001% of his native country’s homeless population. But through digital media, this one of a kind non-profit social enterprise has been able to travel great distances toward their goal and reach an exceptionally large audience along the way. In July, one of billionBricks’ current projects was featured on Fast Company.

Data Ontology is the Future, and I Can’t Wait Click to learn more about author Mike Brody. When the inventor of the World Wide Web says a new technology is gonna be big, I’m inclined to listen. In this now decade-old TED Talk, W3C Director Sir Tim Berners-Lee makes a convincing case for the critical importance of what he calls “data linking,” a technology that would allow data to be linked the way pages are in Wikipedia. Since that talk, the concept has evolved into a critical component of the next internet revolution, what experts call Web 3.0. Berners-Lee explains data linking this way: “Like the web of hypertext, the web of data is constructed with documents on the web.

How Ryder Carroll Designed Bullet Journal Track the past, organize the present, and prepare for the future. Sound like a familiar challenge? Ryder Carroll, a New York-based designer, set out to tackle this head on from his notebook. A little over three years ago, Ryder developed the Bullet Journal, an analog system designed to be a to-do list, diary, notebook, and sketchbook. It’s flexible enough that you can use it in your Moleskine, or borrow elements to put into place in Evernote. We recently chatted with Ryder about the origins of the bullet journal and how he implements it in his daily life.

Gene Ontology overview An ontology is a formal representation of a body of knowledge within a given domain. Ontologies usually consist of a set of classes (or terms or concepts) with relations that operate between them. The Gene Ontology (GO) describes our knowledge of the biological domain with respect to three aspects: In an example of GO annotation, the gene product “cytochrome c” can be described by the molecular function oxidoreductase activity, the biological process oxidative phosphorylation, and the cellular component mitochondrial matrix. The GO vocabulary is designed to be species-agnostic, and includes terms applicable to prokaryotes and eukaryotes, as well as single and multicellular organisms.

Design Kit While working on post-harvest loss for smallholder farmers in sub-Saharan Africa, we wanted to understand how farmers perceived the issue of food spoilage—basically any of their harvest that went bad before it could be sold or eaten. Instead of just asking farmers what they thought about this problem we used a card sort game to get a more nuanced picture. After using regular interviewing techniques to delve into how much food a farmer loses and why, we would ask farmers to put a set of illustrated cards in sequence of what they would invest in first. Creating Knowledge and Maximizing the Value of Data with Ontologies – Kyndi Creating Knowledge and Maximizing the Value of Data with Ontologies November 16, 2017 “What a man doesn’t understand, he does not possess.” Deep Learning for the Masses (… and The Semantic Layer) Well do you want to know the secret? The secret sauce that the big technology companies use? It’s not only Deep Learning (maybe it’s not Deep Learning at all)

Ontology and Data Science If you are new to the word ontology don’t worry, I’m going to give a primer on what it is, and then why it matters for the data world. I’ll be explicit in the difference between philosophical ontology and the ontology related to information and data in computer science. In simple words, one can say that ontology is the study of what there is. But there is another part to that definition that will help us in the following sections, and that is ontology is usually also taken to encompass problems about the most general features and relations of the entities which do exist. Ontology open new doors for what there is too. WebVOWL - Web-based Visualization of Ontologies WebVOWL is a web application for the interactive visualization of ontologies. It implements the Visual Notation for OWL Ontologies (VOWL) by providing graphical depictions for elements of the Web Ontology Language (OWL) that are combined to a force-directed graph layout representing the ontology. Interaction techniques allow to explore the ontology and to customize the visualization. The VOWL visualizations are automatically generated from JSON files into which the ontologies need to be converted.

Out of Data Sam Hind: Could you say a little on what ‘uncertain archives’ are, or what ‘archival uncertainties’ entail or comprise? Are there such uncertainties that are unique to big data archives? Although the marketing rhetoric around big data often focuses on how more data can bring greater and more objective certainty, we in this research group are interested – as others are in the emerging field of Critical Data Studies – in the uncertainties that also arise with the aggregation of large amounts of data, such as new biases, new forms of systemic errors and new ethical dilemmas. We focus on unknowns/unknowables, errors, and vulnerabilities as three “types” of uncertainty that are borne out of thinking about big data as an archive.

New Materialism In critical theory, ecology is a constitutive concept that takes as a starting point the insight of ecological science, which can be expressed, with Bateson as "the unit of survival is organism plus environment" (1972, p. 489). Ecology in a materialist key inhabits various fields, and the term broadly stands for analyses and practices that question the boundaries of embodiment and their entwinement with environments, and also, in an extended sense, approaches that take a radical relational ontology, especially in science, media, arts. Due to the complexity and nomadic quality of the term, rather than a survey, this piece indicates a specific territory that ecological thought and practice holds in a queer-feminist post-/decolonial anti-imperialist ethos: ecology as minoritarian ethico-politics. Ecology is a troubled word that speaks of a troubled world. Home, as Jean-François Lyotard in his deconstruction of Oikos, argues, is not "the place of safety. Images Fig. 1.