I am currently taking my 10th HR course through UofM. I have a 16 year old daughter who keeps me busy when I'm not working at my job with a Winnipeg school division.

Apple Is a Hypocrite on Data Privacy. Apple, too, has benefited from just doing business with the biggest privacy offenders in the tech sector. 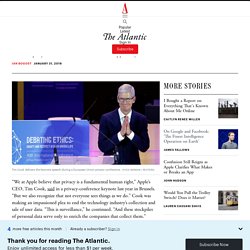 Despite Cook’s claim in Brussels that the “stockpiles of personal data serve only to enrich the companies that collect them,” Apple does lots of deals with those companies. Safari, the web browser that comes with every iPhone, is set up by default to route web searches through Google. For this privilege, Google reportedly paid Apple $9 billion in 2018, and as much as $12 billion this year. All those searches help funnel out enormous volumes of data on Apple’s users, from which Google extracts huge profits. Apple might not be directly responsible for the questionable use of that data by Google, but it facilitates the activity by making Google its default search engine, enriching itself substantially in the process. The same could be said for the apps Apple distributes. Read: Welcome to the age of privacy nihilism App review is just the start. App review is just the start. Your Apps Know Where You Were Last Night, and They’re Not Keeping It Secret.

The millions of dots on the map trace highways, side streets and bike trails — each one following the path of an anonymous cellphone user. One path tracks someone from a home outside Newark to a nearby Planned Parenthood, remaining there for more than an hour. Another represents a person who travels with the mayor of New York during the day and returns to Long Island at night. Yet another leaves a house in upstate New York at 7 a.m. and travels to a middle school 14 miles away, staying until late afternoon each school day. Only one person makes that trip: Lisa Magrin, a 46-year-old math teacher. Her smartphone goes with her. An app on the device gathered her location information, which was then sold without her knowledge. The app tracked her as she went to a Weight Watchers meeting and to her dermatologist’s office for a minor procedure.

“It’s the thought of people finding out those intimate details that you don’t want people to know,” said Ms. Like many consumers, Ms. Intro Ms. School Ms. Clothing Waste. We Need Chief Ethics Officers More Than Ever. “Never before in history have such a small number of designers – a handful of young, mostly male engineers, living in the Bay Area of California, working at a handful of tech companies – had such a large influence on two billion people’s thoughts and choices.” 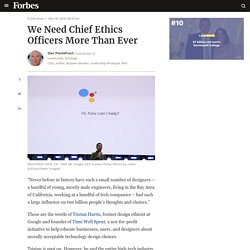 Those are the words of Tristan Harris, former design ethicist at Google and founder of Time Well Spent, a not-for-profit initiative to help educate businesses, users, and designers about morally acceptable technology design choices. Tristan is spot on. However, he and the entire high-tech industry may not be going far enough, or fast enough. Take for instance Google, Tristan’s former employer. Recently at their annual I/O conference, Google CEO Sundar Pichai demonstrated the company’s “Duplex” technology nested within the Google Assistant project. In the demonstration, Pichai asked Assistant to book a haircut appointment and in another a restaurant reservation.

It was both compelling and terrifying. Microsoft is also in on the act. Good Business: 10 Companies With Ethical Corporate Policies. Between the cutthroat competition and questionable actions taken in order to extend profit margins, it's pretty easy to paint the corporate world in a negative light. 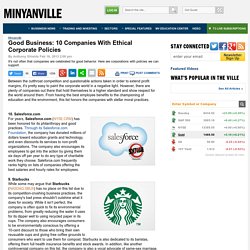 However, there are plenty of companies out there that hold themselves to a higher standard and show respect for the world around them. From having the best employee benefits to the championing of education and the environment, this list honors the companies with stellar moral practices. 10. Salesforce.com For years, Salesforce.com (NYSE:CRM) has been honored for its philanthropy and good practices. Through its Salesforce.com Foundation, the company has donated millions of dollars toward education grants and technology, and even discounts its services to non-profit organizations. 9. 7. 6. 5. Google's New Privacy Concerns with Fitbit. Google's $2.1 billion purchase of Fitbit signals that the search giant is intent on burrowing deeper into our lives, giving it access to some of our most personal health information. 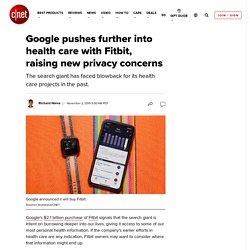 If the company's earlier efforts in health care are any indication, Fitbit owners may want to consider where that information might end up. Over the past three years, Google's experiments in using artificial intelligence and medical data have resulted in government complaints and lawsuits because critics say patient privacy wasn't protected. In one case, Google was provided with identifiable patient information that included doctors' notes and date stamps. Google didn't respond to a request for comment. Google's push into health care comes as lawmakers and consumers increasingly express concerns about the amount of personal information big tech companies collect about users, much of which is used to target ads. "The data doesn't have to be for advertising," she said.

The incident in Chicago wasn't isolated.