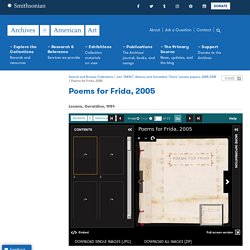 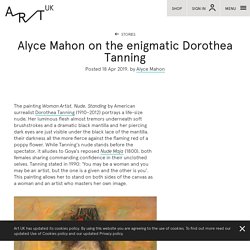 Her luminous flesh almost tremors underneath soft brushstrokes and a dramatic black mantilla and her piercing dark eyes are just visible under the black lace of the mantilla, their darkness all the more fierce against the flaming red of a poppy flower. While Tanning's nude stands before the spectator, it alludes to Goya's reposed Nude Maja (1800), both females sharing commanding confidence in their unclothed selves. Tanning stated in 1990: 'You may be a woman and you may be an artist, but the one is a given and the other is you'.

This painting allows her to stand on both sides of the canvas as a and an artist who masters her own image. Faces of Frida. Becoming an Activist: A Conversation with Dolores Huerta. “Kahlo Article rev v14no3 (1) Frida_Kahlo_voz by IMER-NOTICIAS. HENI Talks - Picturing Power: Elizabeth I and Frida Kahlo. What do Elizabeth I and Frida Kahlo have in common? At first glance, there is little to link these women of different vocations, centuries and cultures. Art history teacher Penny Huntsman, however, finds remarkable parallels in their lives by looking at portraits of the two women. Crafted to project distinctive identity and female power, these paintings proclaim the sacrifices each woman made for her nation. Huntsman explores the symbols and strategies at play in these works. Whilst the two women may have had different motives, Huntsman considers how they could be considered ‘two sides of one coin’.

These are two women that made great sacrifices for their nations. The Armada Portrait of Queen Elizabeth I, painted around 1590 by an unknown artist, commemorates the Spanish Armada of 1588. Elizabeth is taking up most of the composition, she’s in a pyramidal form, she quite literally looks like the person who has intervened to bring this about herself. With thanks to… Bernard Silberstien Pond5. The Extraordinary Presence of Frida Kahlo. Frida-mania: how we got here and what we have to learn. Okay, so I know what you're thinking: 'another article about Frida Kahlo, how…original'. 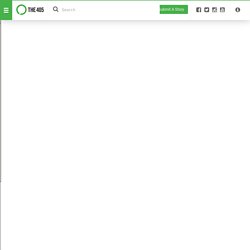 Well, keep your sarky thoughts to yourself. This isn't an article about Frida, it's more about Frida-mania; how we got here and what we have to learn. You see, Kahlo has become something of an icon, with her face plastered practically everywhere — from phone cases to wall paper, to emojis — but actual engagement with her work is somewhat more limited.

Sure, copies of the artist's work are all over the internet, but that's not what people want to buy into necessarily. Frida Kahlo: The woman behind the legend - Iseult Gillespie. Born in Coyoacán in 1907, Kahlo is known for her resplendent imagery and unapologetic individualism. 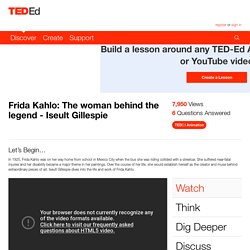 Animals and plants, along with her body, pain and spirituality, became signature themes of her unique visual language. She painted many eerie portraits, still lives and spiritual scenes - but it is her mesmerizing self-portraits which first caught people's attention, and continued to captivate after her death. Such work is groundbreaking because it turned self-portraiture inward - especially at a time when women often inhabited art only as men saw them.

BBC Radio 4 - In Our Time, Frida Kahlo. Frida Kahlo: The woman behind the legend - Iseult Gillespie. Frida kahlo. Frida Kahlo’s Diary: A Glimpse Inside Her Tortured, Scribble-Happy World. As frenzied mourners watched the earthly remains of Frida Kahlo roll away into the crematory, the artist, known in her day for her macabre sense of mischief, played one last ghoulish trick on her audience. 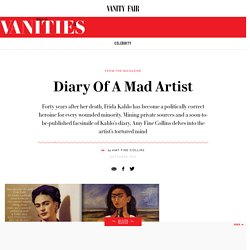 The sudden blast of heat from the open incinerator doors blew the bejeweled, elaborately coiffed body bolt up-right. Her ignited hair blazed around her head like an infernal halo. One observer recalled that, deformed by the phantasmagoric, flickering shadows, her lips appeared to break into a grin just as the doors closed shut. Frida’s postmortem chuckle—a last laugh if there ever was one—is echoing still. HENI Talks - Picturing Power: Elizabeth I and Frida Kahlo. Frida Kahlo at the V&A and Cindy Sherman at Sprüth Magers - Waldemar Januszczak. Frida Kahlo’s favourite lipstick was a shade called Everything’s Rosy, produced by Revlon. 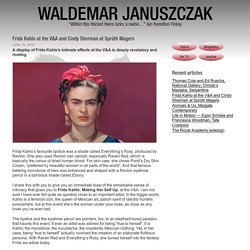 She also used Revlon nail varnish, especially Raven Red, which is basically the colour of dried human blood. For skin care, she chose Pond’s Dry Skin Cream, “preferred by beautiful women in all parts of the world”. And that famous batwing monobrow of hers was enhanced and shaped with a Revlon eyebrow pencil in a bat-black shade called Ebony. I share this with you to give you an immediate blast of the remarkable sense of intimacy that glues you to Frida Kahlo: Making Her Self Up, at the V&A. I am not sure I have ever felt quite as spookily close to an important artist. The lipstick and the eyebrow pencil are pointers, too, to an elephant-sized paradox that haunts this event. It’s a story told in detail by an undies drawer of a show whose contents have literally been snatched from her bedroom. But La Casa Azul had another secret.