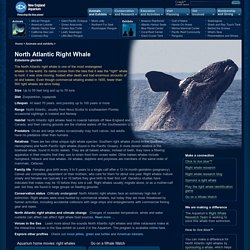 Its name comes from the idea that it was the "right" whale to hunt: it was slow moving, floated after death and had enormous amounts of oil and baleen. Even though commercial whaling ended in 1935, fewer than 500 right whales are alive today. North Atlantic Right Whale, Quick Facts. North Atlantic right whale mother and calf, by Gill Braulik under Permit No. 655-1652 Quick Facts Estimated population: 350 to 400Status: Endangered (IUCN Red List)Range: East coast of North America from Newfoundland to Florida; a population that existed off Iceland and northern Europe is now thought extinctLength: 45 to 55 feetWeight: Up to 70 tonsLife span: Historically, 50 to 70 years; but whales born today have a life expectancy around 15 years, owing in part to ship strikes and entanglementsAge at first breeding: Males unknown, females 9 yearsGestation period: 12-14 months; females give birth every 3 to 6 yearsDiet: Plankton, especially copepods, strained through baleen plates in the mouthTop speed: 10 mph, for brief periodsDiving ability: to 1,000 feet depth, for 40 minutes. 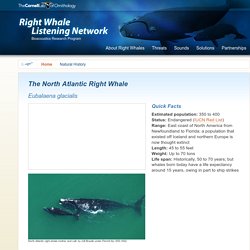 RIGHT WHALE. GENERAL DESCRIPTION The right whales (Eubalaena spp.) are baleen whales with bow-shaped lower jaw and a head that is up to one-quarter of the body length. 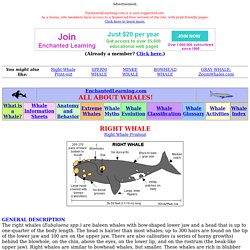 The head is hairier than most whales; up to 300 hairs are found on the tip of the lower jaw and 100 are on the upper jaw. There are also callosities (a series of horny growths) behind the blowhole, on the chin, above the eyes, on the lower lip, and on the rostrum (the beak-like upper jaw). Whales: How Are Whales Being Protected? Not only are many whales protected from hunting, governments in Canada and all over the world are working together along with industries and environmental groups to protect whales and make oceans and rivers cleaner, safer places for them to live. 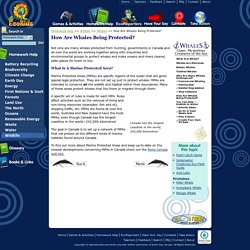 What Is A Marine Protected Area? Marine Protected Areas (MPAs) are specific regions of the ocean that are given special legal protection. They are not set up just to protect whales. MPAs are intended to conserve all the wildlife and habitat within their boundaries. Many of these areas protect whales that live there or migrate through them. Whales: Why Are Many Whales Endangered?: Ship Collisions. Right Whale Oceans and large rivers all over the world serve as transport routes for thousands of boats and large cargo ships. 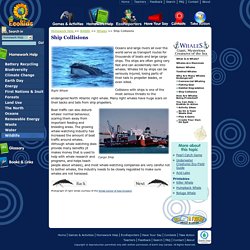 The ships are often going very fast and can accidentally ram into whales. Whales hit by ships can be seriously injured, losing parts of their tails to propeller blades, or even killed. Collisions with ships is one of the most serious threats to the endangered North Atlantic right whale. Whales: Why Are Many Whales Endangered?: Commercial Whaling. A woman's corset made with whale bone. 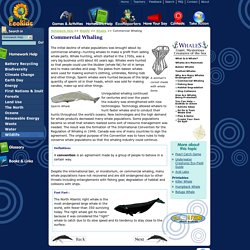 The initial decline of whale populations was brought about by commercial whaling—hunting whales to make a profit from selling whale parts. Whale hunting, which started in the 1700s, was a very big business until about 60 years ago. Whales were hunted so that people could use the blubber (whale fat) for oil in lamps and to make candles and soap. The plates from baleen whales were used for making women’s clothing, umbrellas, fishing rods and other things. 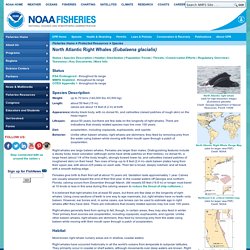 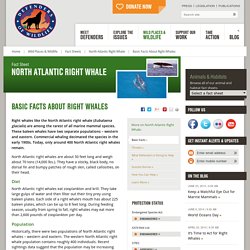 These baleen whales have two separate populations – western and eastern. Commercial whaling decimated the species in the early 1900s. Today, only around 400 North Atlantic right whales remain. North Atlantic right whales are about 50 feet long and weigh about 70 tons (14,000 lbs.). Why Are Whales Endangered? The hunting of whales (by humans) has existed for thousands of years; as far back as prehistoric times. 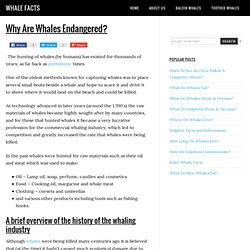 One of the oldest methods known for capturing whales was to place several small boats beside a whale and hope to scare it and drive it to shore where it would land on the beach and could be killed. As technology advanced in later years (around the 1,700′s) the raw materials of whales became highly sought after by many countries, and for those that hunted whales it became a very lucrative profession for the commercial whaling industry, which led to competition and greatly increased the rate that whales were being killed.

In the past whales were hunted for raw materials such as their oil and meat which was used to make: Oil – Lamp oil, soap, perfume, candles and cosmeticsFood – Cooking oil, margarine and whale meatClothing – corsets and umbrellasand various other products including tools such as fishing hooks. Right Whales, Right Whale Pictures, Right Whale Facts - National Geographic. Right whales are the rarest of all large whales. 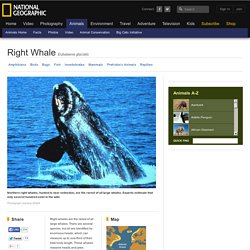 There are several species, but all are identified by enormous heads, which can measure up to one-third of their total body length. These whales' massive heads and jaws accommodate hundreds of baleen "teeth. " Rights and other baleen-feeding whales use a comblike strainer of baleen plates and bristles to ensnare tiny morsels of food as they swim. Right whales feed on zooplankton and other tiny organisms using baleens up to 8 feet (2.4 meters) long. North Atlantic right whale. A species with close attachments This large whale mostly inhabits temperate waters, and compared to other similar-sized cetaceans is found more often in coastal waters, especially during the breeding season.