Fathers Who Serve as the Primary Parent. Three years ago, my wife, Anne-Marie Slaughter, wrote in these pages about how difficult it remains for women to “have it all”—a family and a career. 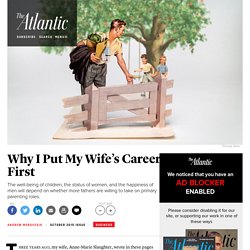 She’d recently left a high-powered job in Washington, D.C., to return to our home in Princeton, New Jersey, where I had been acting as lead parent to our children. Somewhat ironically, her article on work-life balance led her to increased prominence on the national stage, which reinforced my role as the lead parent of our two sons—a role I continue to fill today. Here is the other half of our family’s story. Anne-Marie and I went to college just as female graduates were beginning to outnumber their male counterparts, and, in many cases, to outperform them as well. Accordingly, my attitude toward my wife differed from my father’s stance toward my mother. We assumed from the start that we would approach child-rearing as “co-parents,” either equitably sharing duties or taking turns being the lead parent. “We’re trusted to do a good job, then leave”: why the Danes finish work on ti... The Right Way to Cut People Off in Meetings. 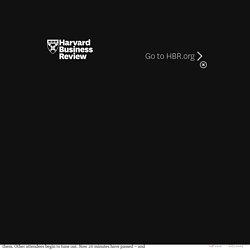 The objectives are clear. The agenda is tight. Relevant material was distributed to attendees in advance. Smartphones are put away, and your team seems focused and ready to work. The conversation begins, but after 10 minutes of good discussion on the first agenda item, someone goes off on a tangent that, while interesting, is only marginally related to the designated topic. We’ve all seen scenes like this play out, whether in an hourlong meeting or at a multiday offsite. Thankfully, there is a simple solution to this predicament: the word “jellyfish.”

Here’s how it works. Of all things, why is jellyfish so effective? Katie Fallon, Top Obama Aide, Leaving White House. Photo WASHINGTON — Katie Beirne Fallon, the top legislative official who helped improve President Obama’s dysfunctional relationship with Capitol Hill, will leave the White House in the coming weeks, a departure that reflects shrinking ambitions for lawmaking during Mr. 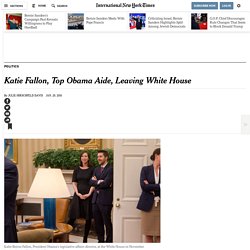 Obama’s final year in office. The exit of Ms. Fallon, who has held the post for two years, means that Mr. Obama is losing a trusted aide in the West Wing whose deep relationships on Capitol Hill helped him prevail in tough fights over trade, federal spending and the Iran nuclear deal. From the moment he tapped Ms. “Republicans and Democrats in Congress have their differences, but when it comes to Katie, they’re united in their admiration and respect,” Mr. Ms. After an improbable flurry of bipartisan deals late last year, including the completion of a two-year budget agreement that did away with automatic spending cuts Mr. 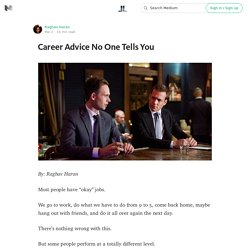 We go to work, do what we have to do from 9 to 5, come back home, maybe hang out with friends, and do it all over again the next day. There’s nothing wrong with this. But some people perform at a totally different level. They’re the people who land executive level positions by their early 30s while everyone else is still trying to “work their way up.” They’re the people who jump out of bed every morning, excited about the day ahead while everyone else drags themselves out of bed every Monday.

They’re the people who impact thousands of people through their work, while everyone else keeps themselves busy with pointless tasks at work. Here’s what they understand, that most people don’t. 1. I remember going to the grocery store with my (Indian) grandfather when I was a kid. He would always look closely at the price of everything we put in our basket. But the crazy thing is… it usually worked. Six Habits Of People Who Know How To Bring Out The Best In Others. If you think your most important job as a leader is to write mission statements, set goals, or even increase revenue, you’re focusing on the wrong metrics. 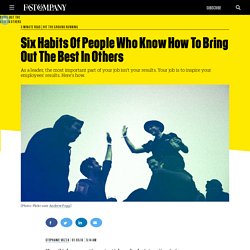 Your most significant role doesn’t involve your results; your job is to inspire your employees’ results, says Richard S. Wellins, co-author of Your First Leadership Job: How Catalyst Leaders Bring Out the Best In Others. "As a leader your focus changes; your number one priority is to bring out the best in others," says Wellins, who is senior vice president at management consulting firm DDI. A study done by DDI and Harris Interactive found that 98% of employees who have good leaders are motivated to do their best, while only 11% of employees with ineffective managers felt motivated to give their best.

Being able to bring out the best in others is a skill that involves just 10% natural inclination; the other 90% has to be deliberate, says Wellins: "It can’t be learned by listening to a lecture or reading examples," he says. 1.