THE BIGGER PICTURE:
A Broad View & Timeline of DAPL/Industry/Gov, through the official documents.

The Citi Blog - Citi's Statement on the Dakota Access Pipeline Project. 12.12.16 Tribal Chairman Archambault’s statement on Dec. 12 meeting with North Dakota Gov. Dalrymple. Cannon Ball, N.D.— The following statement from the Standing Rock Sioux’s Tribal Chairman, Dave Archambault II, can be quote in part or in full: “This past Monday, several councilmembers and myself met with the Governor in the interest of salvaging a professional relationship in what can only be described as the most troubling of times. 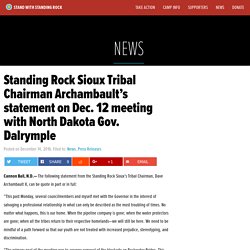 No matter what happens, this is our home. When the pipeline company is gone; when the water protectors are gone; when all the tribes return to their respective homelands—we will still be here. We need to be mindful of a path forward so that our youth are not treated with increased prejudice, stereotyping, and discrimination. 09.09.16 Joint Statement from the Department of Justice, the Department of the Army and the Department of the Interior Regarding Standing Rock Sioux Tribe v. U.S. Army Corps of Engineers. 12. 20.16 Transcript of Sept 30th DAPL meeting with SRST. 09.09.16 STANDING ROCK SIOUX TRIBE v. UNITED STATES ARMY CORPS OF ENGINEERS (pdf) 12.01.16 162 Cong. Rec. H7111 - PROTESTS OF THE DAKOTA ACCESS PIPELINE. 11.30.16 HOEVEN: 162 Cong. Rec. S6598 - DAKOTA ACCESS PIPELINE (pdf) 12.01.16 162 Cong. Rec. H7065 - DAKOTA ACCESS PIPELINE (pdf) 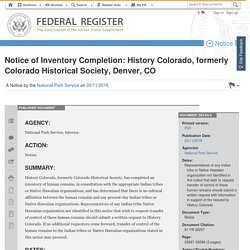 08.21.14 Corps Needs to Take Steps to Identify All Projects and Studies Eligible for Deauthorization. What GAO Found The U.S. 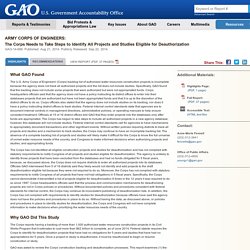 Army Corps of Engineers' (Corps) backlog list of authorized water resources construction projects is incomplete because the agency does not track all authorized projects and the list does not include studies. Committee Unanimously Approves Pipeline Safety Bill. The Transportation and Infrastructure Committee today unanimously approved bipartisan legislation to reauthorize the Department of Transportation’s (DOT) pipeline safety program and maintain the safety of our nation’s pipeline network. 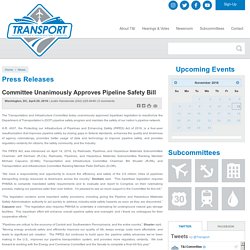 H.R. 4937, the Protecting our Infrastructure of Pipelines and Enhancing Safety (PIPES) Act of 2016, is a four-year reauthorization that improves pipeline safety by closing gaps in federal standards, enhances the quality and timeliness of agency rulemakings, promotes better usage of data and technology to improve pipeline safety, and provides regulatory certainty for citizens, the safety community, and the industry. “We have a responsibility and opportunity to ensure the efficiency and safety of the 2.6 million miles of pipelines transporting energy resources to Americans across the country,” Denham said.

“Pipelines are critical to the economy of Central and Southwestern Pennsylvania, and the entire country,” Shuster said. 08.21.14 Oil & Gas Transportation: Additional Actions Are Needed to Improve Pipeline Safety. What GAO Found Increased oil and gas production presents challenges for transportation infrastructure because some of this increase is in areas with limited transportation linkages. 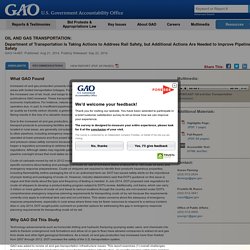 For example, insufficient pipeline capacity to transport crude oil has resulted in the increased use of rail, truck, and barge to move oil to refineries, according to government and industry studies and publications GAO reviewed. These transportation limitations and related effects could pose environmental risks and have economic implications. For instance, natural gas produced as a byproduct of oil is burned—a process called flaring—by operators due, in part, to insufficient pipelines in production areas. 10.26.15 General Provisions and Non-Federal Oil and Gas Rights [Federal Register] (pdf) 10.12.16 Obama Administration Exceeds Ambitious Goal to Restore 500,000 Acres of Tribal Homelands. 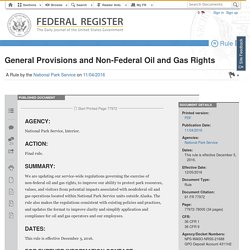 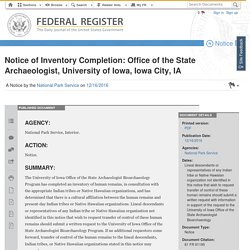 Notice. The University of Iowa Office of the State Archaeologist Bioarchaeology Program has completed an inventory of human remains, in consultation with the appropriate Indian tribes or Native Hawaiian organizations, and has determined that there is a cultural affiliation between the human remains and present-day Indian tribes or Native Hawaiian organizations. Governor, Standing Rock Chairman Begin Dialogue, Agree to Bridge Testing. BISMARCK – Gov. 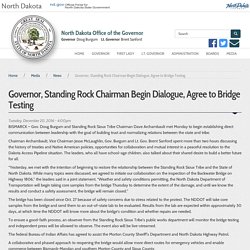 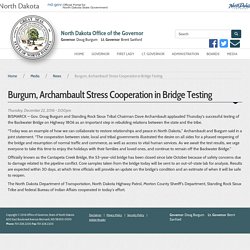 Doug Burgum and Standing Rock Sioux Tribal Chairman Dave Archambault applauded Thursday’s successful testing of the Backwater Bridge on Highway 1806 as an important step in rebuilding relations between the state and the tribe. “Today was an example of how we can collaborate to restore relationships and peace in North Dakota,” Archambault and Burgum said in a joint statement. “The cooperation between state, local and tribal governments illustrated the desire on all sides for a phased reopening of the bridge and resumption of normal traffic and commerce, as well as access to vital human services. As we await the test results, we urge everyone to take this time to enjoy the holidays with their families and loved ones, and continue to remain off the Backwater Bridge.” Officially known as the Cantapeta Creek Bridge, the 53-year-old bridge has been closed since late October because of safety concerns due to damage related to the pipeline conflict.

01.09.14 Pipeline & Rail Competition for Crude Transportation in North Dakota. North Dakota Pipeline Authority North Dakota Petroleum Council Annual Meeting September 20, 2012. Joint Statement from the Department of Justice, the Department of the Army and the Department of the Interior Regarding Standing Rock Sioux Tribe v. U.S. Army Corps of Engineers. Bill to transfer certain land from Secretary of the Army, and for other purposes. (H.R. 6235) When President-elect Trump takes office on January 20, the House, Senate, and White House will be controlled by the same party for the first time in six years. 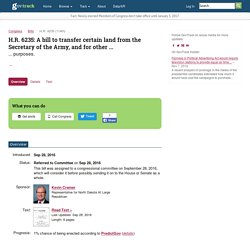 Dakota Access and ETCO each anticipate that incremental transport capacity for Bakken/Three Forks production will be determined based on committed subscriptions made by shippers during the Supplemental Open Season. This Smart News Release features multimedia. 20141224114029 OR14 42 000. Energy Transfer Partners and Sunoco Logistics Partners Respond to the Statement from the Department of the Army. DALLAS & NEWTOWN SQUARE, Pa. --(BUSINESS WIRE)--Energy Transfer Partners, L.P. (NYSE: ETP) and Sunoco Logistics Partners L.P. (NYSE: SXL) announced that the Administration’s statement today that it would not at this time issue an “easement” to Dakota Access Pipeline is a purely political action – which the Administration concedes when it states it has made a “policy decision” – Washington code for a political decision.

This is nothing new from this Administration, since over the last four months the Administration has demonstrated by its action and inaction that it intended to delay a decision in this matter until President Obama is out of office. “not alter the Army’s position that the Corps’ prior reviews and actions have comported with legal requirements.”Tweet this.

NWP12 serves as a blanket permit that can be used to fast-track the construction of massive oil pipelines by artificially treating them as thousands of small, individual projects that are exempt from the environmental review required by the Clean Water Act and the National Environmental Policy Act. With the permit up for renewal, thousands of people from across the country have weighed in – including over 50,000 comments submitted yesterday from the Sierra Club alone – to express serious concerns about this process.