8 Signs You're Stuck In A Toxic Marriage  By Michela for DivorcedMoms.com The first time I heard the phrase "toxic marriage," I felt a little sick. 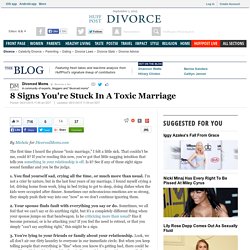 That couldn't be me, could it? If you're reading this now, you've got that little nagging intuition that tells you something in your relationship is off. Is it? See if any of these eight signs sound familiar and you be the judge. 1. 2. 3. 4. 5. 6. 7. 8. La CNV : qu'est-ce que c'est ? Nous avons tous expérimenté des manières joyeuses et authentiques d’être en relation avec nous-mêmes et avec les autres. 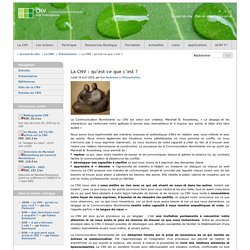 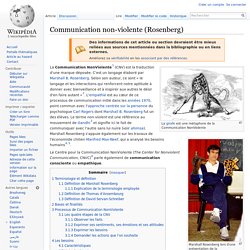 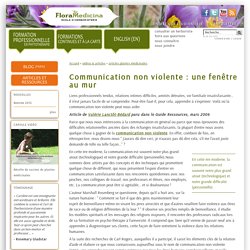 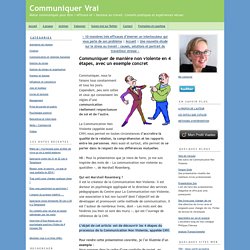 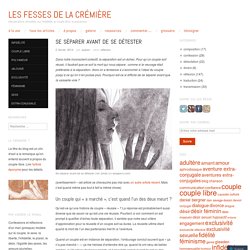 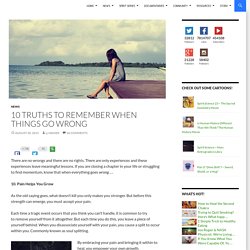 There are only experiences and these experiences leave meaningful lessons. If you are closing a chapter in your life or struggling to find momentum, know that when everything goes wrong…. 10. Pain Helps You Grow As the old saying goes, what doesn’t kill you only makes you stronger. How To Bond (Without Touch) When A Relationship Is Strained. When we think of bonding, most often we default to touch – but in platonic, long-distance, and strained relationships, touch is not an option. 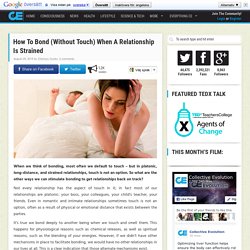 So what are the other ways we can stimulate bonding to get relationships back on track? Not every relationship has the aspect of touch in it; in fact most of our relationships are platonic: your boss, your colleagues, your child’s teacher, your friends. Minimisation (psychology) Minimisation may take the form of a manipulative technique: Minimisation may also take the form of cognitive distortion: that avoids acknowledging and dealing with negative emotions by reducing the importance and impact of events that give rise to those emotions.that avoids conscious confrontation with the negative impacts of one's behavior on others by reducing the perception of such impacts.that avoids interpersonal confrontation by reducing the perception of the impact of others' behavior on oneself. saying that a taunt or insult was only a jokea customer receiving a response to a complaint to a company for poor service being told that complaints like his from other customers were very rare when in fact they are commonsuggesting that there are just a few bad apples or rogues in an organisation when in reality problems are widespread and systemic Understatement is a form of speech which contains an expression of less strength than what would be expected. 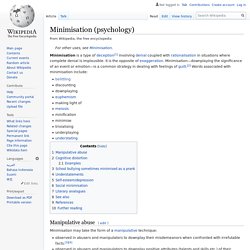 Name calling. Name calling is abusive or insulting language referring to a person or group, a verbal abuse. 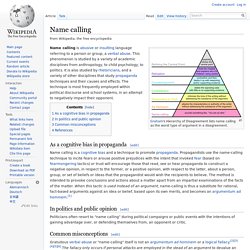 This phenomenon is studied by a variety of academic disciplines from anthropology, to child psychology, to politics. It is also studied by rhetoricians, and a variety of other disciplines that study propaganda techniques and their causes and effects. Humiliation. The Pillory, from The Costume of Great Britain (1805) Humiliation is the abasement of pride, which creates mortification or leads to a state of being humbled or reduced to lowliness or submission. It is an emotion felt by a person whose social status, either by force or willingly, has just decreased.[1] It can be brought about through intimidation, physical or mental mistreatment or trickery, or by embarrassment if a person is revealed to have committed a socially or legally unacceptable act. Whereas humility can be sought alone as a means to de-emphasize the ego, humiliation must involve other person(s), though not necessarily directly or willingly.

Humiliation is currently an active research topic, and is now seen as an important – and complex – core dynamic in human relationships, having implications at intrapersonal, interpersonal, institutional and international levels.[2] Coercion. Overview[edit] The purpose of coercion is to substitute one's aims to those of the victim. For this reason, many social philosophers have considered coercion as the polar opposite to freedom.

[citation needed] Various forms of coercion are distinguished: first on the basis of the kind of injury threatened, second according to its aims and scope, and finally according to its effects, from which its legal, social, and ethical implications mostly depend. Social undermining. Social undermining is the expression of negative emotions directed towards a particular person or negative evaluations of the person as a way to prevent the person from achieving his or her goals. This behavior can often be attributed to certain feelings, such as dislike or anger. The negative evaluation of the person may involve criticizing his or her actions, efforts or characteristics.[1] Social undermining is seen in relationships between family members, friends, personal relationships and co-workers.

Social undermining can affect a person's mental health, including an increase in depressive symptoms. Abus verbal. Un article de Wikipédia, l'encyclopédie libre. L'abus verbal, comportement abusif utilisant généralement le langage. Un abus verbal (agression verbale ou attaque verbale) est une forme de comportement abusif impliquant l'utilisation du langage. Verbal abuse. Verbal abuse (also known as reviling or " verbal bullying") is described as a negative defining statement told to the victim or about the victim, or by withholding any response, thereby defining the target as non-existent. If the abuser does not immediately apologize and retract the defining statement, the relationship may be a verbally abusive one.[1] In schools and in everyday life, a person may indulge in verbal abuse — bullying (which often has a physical component) to gain status as superior to the person targeted and to bond with others against the target.

Generally the bully knows no other way to connect emotionally with others.[2] Anyone can experience verbal abuse. Typically, in couple or family relationships verbal abuse increases in intensity and frequency over time.[1] After exposure to verbal abuse, victims may develop clinical depression and/or post-traumatic stress disorder. Psychological abuse. Psychological abuse (also referred to as psychological violence, emotional abuse, or mental abuse) is a form of abuse, characterized by a person subjecting, or exposing, another person to behavior that may result in psychological trauma, including anxiety, chronic depression, or post-traumatic stress disorder.[1][2][3] It is often associated with situations of power imbalance in abusive relationships including bullying, gaslighting, and abuse in the workplace.[2][3] It also may be perpetrated by persons conducting torture, other violence, acute or prolonged stealing and human rights abuse, particularly without legal redress such as detention without trial, false accusations, false convictions and extreme defamation such as where perpetrated by state and media.

Definitions[edit] As of 1996[update],[3] there were "no consensus views about the definition of emotional abuse. " As such, clinicians and researchers have offered sometimes divergent definitions of emotional abuse. Prevalence[edit] Domestic violence. Domestic violence (also domestic abuse, spousal abuse, intimate partner violence, battering or family violence) is a pattern of behavior which involves violence or other abuse by one person against another in a domestic setting, such as in marriage or cohabitation. Intimate partner violence is violence by a spouse or partner in an intimate relationship against the other spouse or partner. Domestic violence can take place in heterosexual or same-sex relationships, and sometimes also involves violence against the children in the family. Domestic violence can take a number of forms including physical, verbal, emotional, economic and sexual abuse, which can range from subtle, coercive forms to marital rape and to violent physical abuse that results in disfigurement or death.

Domestic murders include honor killings and dowry deaths. Intimidation. Intimidation (also called cowing) is intentional behavior that "would cause a person of ordinary sensibilities" fear of injury or harm. It is not necessary to prove that the behavior was so violent as to cause terror or that the victim was actually frightened.[1] Criminal threatening (or threatening behavior) is the crime of intentionally or knowingly putting another person in fear of imminent bodily injury. Control freak.

In psychology-related slang, control freak is a derogatory term for a person who attempts to dictate how everything around them is done. The phrase was first used in the late 1960s[1] — an era when great stress was laid on the principle of 'doing one's own thing' and letting others do the same.[2] In some instances, the term is earnest or self-mocking rather than derogatory, as when a self-styled "take charge" individual willingly proclaims the label. [citation needed] Passive-aggressive behavior. Passive-aggressive behavior is the indirect expression of hostility, such as through procrastination, stubbornness, sullen behavior, or deliberate or repeated failure to accomplish requested tasks for which one is (often explicitly) responsible.

Manifestations[edit] 5 Signs You Might be in an Emotionally Manipulative Relationship. Everyone wants a relationship to share their experience of life with someone. Everyone wants someone who can be with them through their ups and downs. Manipulation mentale. Un article de Wikipédia, l'encyclopédie libre. Psychological manipulation. Psychological manipulation is a type of social influence that aims to change the perception or behavior of others through underhanded, deceptive, or even abusive tactics.[1] By advancing the interests of the manipulator, often at another's expense, such methods could be considered exploitative, abusive, devious, and deceptive.

Social influence is not necessarily negative. For example, doctors can try to persuade patients to change unhealthy habits. Power and control in abusive relationships. Cycle of abuse. Silent treatment. Power and control in abusive relationships. Gaslighting. 10 Things I've Learned About Gaslighting As An Abuse Tactic. Huffingtonpost. I Wasn’t Treating My Husband Fairly, And It Wasn’t Nice (Powerful Story)

Les 7 révélateurs d'une personnalité égoïste. 4 Qualities That Make A Real Man - mindbodygreen.com. Debunking The Myth Of The Highly-Sexed Man. IT HAPPENED TO ME: I Married a Narcissist Who Went From Zero to Crazy in a Matter of Months - xoJane. Narcissistic Personality Disorder Symptoms. 10 Habits Of Emotionally Resilient People. How To Express Your Authentic Truth In Relationships - mindbodygreen.com. How To Trust (Especially When You've Been Hurt) Why Restoring Self-Trust Will Transform Your Life. How To Rebuild Trust (Even If It Feels Impossible) 5 Things You Should Never Do On Facebook. 38 Hard Truths About Relationships. Test : Reconnaître un pervers narcissique.