The Tangled Web of Dominion, Smartmatic, and their Shell Companies. “Oh, what a tangled web we weave when we practice to deceive.”, Sir Walter Scott wrote that famous quote in 1806. 214 years later Tracy Beanz, Editor-in-Chief of UncoverDC paraphrased it to describe the web of lies, deceit, and shady dealings that allowed Sequoia, Smartmatic and Dominion to place easily manipulated voting systems into “some 600 US jurisdictions in 22 states“. 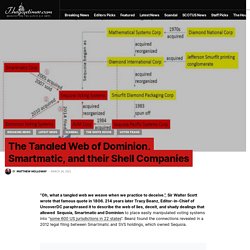 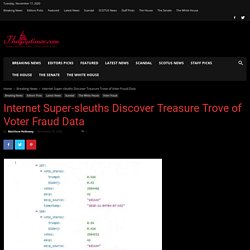 The data shows switched votes from President Trump to Former Vice President Joe Biden. They pored over hundreds of pages of code and have now revealed their findings to the online world. The shock waves will be wide reaching and disturbing. With the story breaking from The Gateway Pundit, MadworldNews and thedonald.win the left seem to be in full panic mode to bury it. What did ‘The Code’ these Internet Super-sleuths Discovered do? Unaudited analysis shows Dominion voting machines and others allegedly switched 512, 095 votes from Trump to Biden and “Lost” or “Deleted” 2,865,757 votes. Therefore , Dominion Voting Systems among other machines compromised election results of the remaining 41 States. 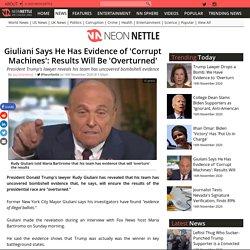 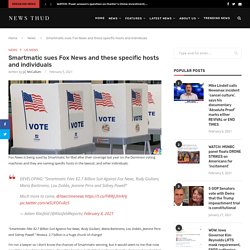 Wowza. 2.7 billion is a huge chunk of change! I’m not a lawyer so I don’t know the chances of Smartmatic winning, but it would seem to me that now would be a good time for Sidney Powell to break out all of that evidence that she claims to have had last year. SolarWinds – Targeted by Massive Cyberattack – Hires Kamala Harris's Husband's Former CCP-Linked Law Firm As Lobbyists. 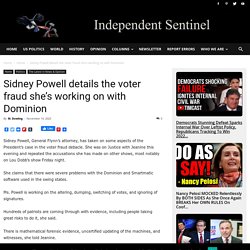 She was on Justice with Jeanine this evening and repeated the accusations she has made on other shows, most notably on Lou Dobb’s show Friday night. She claims that there were severe problems with the Dominion and Smartmatic software used in the swing states. Ms. Powell is working on the altering, dumping, switching of votes, and ignoring of signatures. Hundreds of patriots are coming through with evidence, including people taking great risks to do it, she said. Flashback: Democrats Warned of Voting Machines 'Switching' Votes Last Year. On Thursday, President Trump sounded the alarm about Dominion Voting Systems, claiming as many as 2.7 million Trump votes were deleted and switched to Biden in Pennsylvania and other states using the software. 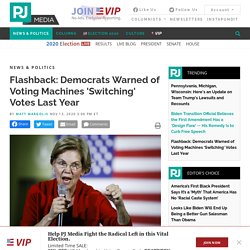 Trump supporters are using a glitch in the vote-counting software in a small Michigan county as evidence that votes for the president are being suppressed. 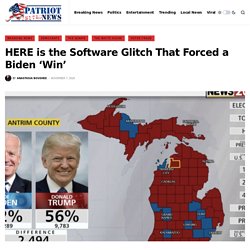 Thousands of votes were switched from Trump to Biden, and from Republican Senate candidate John James to Democrat Senator Gary Peters in Antrim County due to a supposed problem with the vote-counting software. Biden is beating President Trump in Michigan by 146,123 votes, with 98 percent of ballots counted, and because of this, multiple news organizations have declared the former vice president the winner of the state’s 16 electoral votes. At a press conference on Friday, Michigan GOP Chairwoman Laura Cox said that “in Antrim County, ballots were counted for Democrats that were meant for Republicans, causing a 6,000 vote swing against our candidates.

The county clerk came forward and said, ‘tabulating software glitched and caused a miscalculation of the votes.’” A computer science professor at the University of Michigan, J. Dominion Engineer Told Antifa He'd 'Made Sure' Trump Wouldn't Win, Report Says. On 15th November 2020 @ 4.00pm © press Dominion's top engineer assured Antifa activists that he had "made f**king sure" that President Donald Trump wouldn't win the presidential race, according to reports. 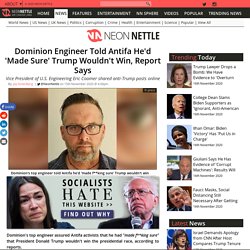 Dominion Voting Systems' Vice President of U.S. Engineering Eric Coomer allegedly spoke with Antifa members on conference calls and reportedly assured the other participants by saying: “Don’t worry about the election, Trump’s not gonna win. Dominion Voting Systems is one of the largest voting technology companies in the United States. This is How Obama is Connected With the Software Company Dominion  The voting software Dominion is being blamed for massive voter fraud in the 2020 election. 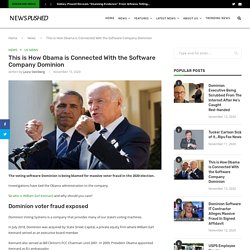 Investigations have tied the Obama administration to the company. So who is William Earl Kennard and why should you care? Signed Affidavit by Dominion Insider is About to Roast the Entire Democrat Party - The GOP Times. An IT contractor with Dominion Voting Systems sent to oversee the software in use to count ballots in Detroit, Michigan, on Election Day signed a sworn oath that is so red-hot it’s about to roast the entire Democrat party like a Thanksgiving turkey. 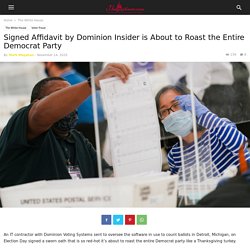 Once her allegations are confirmed, they’ll prove massive election fraud in Michigan which could affect the count in other states as well. Dominion software engineer speaks out. This is How Obama is Connected With the Software Company Dominion  Sidney Powell: Our 'First-Hand Witness' Helped Create Software System to Flip Results. On 17th November 2020 @ 3.00pm © press President Donald Trump's lawyer Sidney Powell says her team has a sworn affidavit from a "first-hand witness" who was present when the Smartmatic and Dominion software systems were programmed to allow results to be changed at will.

By accessing personal electronic devices such as smartphones, tablets, and computers, Chinese connected software applications can access and capture vast swaths of information from users, including sensitive personally identifiable information and private information. Accordingly, I hereby order: Another election computer glitch in Michigan reversed as Republican declared belated winner. A Michigan Republican received a welcome shock when his apparent loss at the polls was reversed due to the fix of a "technical glitch" that originally had him losing the election. Adam Kochenderfer was originally declared the loser in his race against Democrat Melanie Hartman for a position on the Oakland County Board of Commissioners.

The narrow race appeared to end with Hartman the winner by just 104 votes. Yet the county clerk soon discovered that a set of absentee ballots had actually been reported in the voter totals twice. Once the duplicate set was removed, Kochenderfer came out ahead by 1,127 votes. Software that incorrectly gave Biden thousands of Michigan votes used in 28 other states. Election software that incorrectly awarded thousands of votes to Joe Biden in Michigan is used in a majority of U.S. states, including statewide in Georgia where it has reportedly been implicated in several voting-related “glitches” there. The Michigan Secretary of State confirmed on Friday that a software error in Antrim County, Michigan, in which Joe Biden was incorrectly awarded thousands of votes that led him to be declared the county winner, was caused by an error in which the county clerk “did not update the software used to collect voting machine data and report unofficial results. " The software is administered by the company Dominion Voting Systems.

Following the correction of the error, the county flipped back to Trump, who walked away with 2,500 more votes than Biden. Multiple election-related "glitches" have been reported in the state since Tuesday. One America News Network. Attorney Who Exposed Dominion In Forensic Report Releases Damning Video Of Michigan Election Official Violating Election Laws. Constitutional Attorney Matthew DePerno is doing amazing work, if it wasn’t for him we never would have seen the results of the audit that exposed Dominion voting machines. The forensic examination of Dominion Voting machines in Antrim, County Michigan showed a 68.05% error rate.

“The ballots are sent somewhere where people in another location can change the vote,” DePerno explained. The allowable election error rate established by the Federal Election Commission guidelines is 1 in 250,000 ballots or .0008%. The report was panned by the mainstream media however, Secretary of State Jocelyn Benson was forced to order a “risk-limited audit.

Election, was rejected three times by data communications experts from the Texas Secretary of State and Attorney General’s Office for failing to meet basic security standards. Voting Systems Used In States With Election "Glitches" That Gave Biden Votes Have Serious Security Issues, Cybersecurity Experts Say. The Software Glitch That is Switching Trump Votes to Biden Votes - The GOP Times. Lt. Gen. Tom McInerney exposes 'Scorecard,' the Democrats' voter fraud superweapon. Voter fraud is happening right now. We all know it; one would be hard pressed to find a single American on either side of the aisle who would not acknowledge that it’s taking place. Around half the country realizes (or is willing to admit) it’s happening in favor of Democrats, but very few realize just how deep this particular rabbit hole goes. 'Hammer' and 'Scorecard': Lt. Gen. McInerney explains the election hack by Democrats.