House Dem opposing impeachment inquiry slams 'failed' process. A Democratic lawmaker from New Jersey told Fox News on Wednesday that despite an impending vote on a House impeachment resolution, he doubts that formalizing the investigation into President Trump will do little more than result in a failed process. 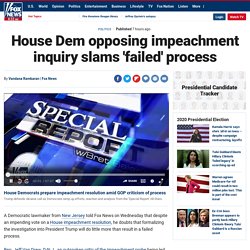 Rep. Jeff Van Drew, D-N.J., an outspoken critic of the impeachment probe being led by Democratic colleagues on three House committees, said he doubts he will vote in favor of the resolution introduced Tuesday. House Dem Jeff Van Drew Signals He's Not Voting for Pelosi's Impeachment Bill. Asked by NBC News reporter Alex Moe if he supports the measure, Van Drew replied: “I would imagine that I’m not voting for it.” 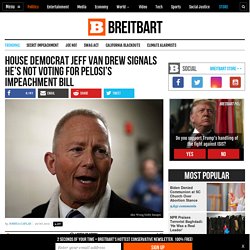 Van Drew, whose district President Trump won in 2016, is among roughly a dozen House Democrats who oppose the impeachment inquiry. The Hearsay Impeachment - Gregg Jarrett. The Democratic Party has painted itself into a corner. 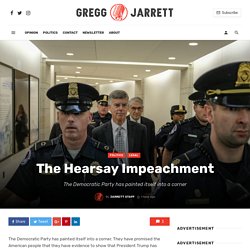 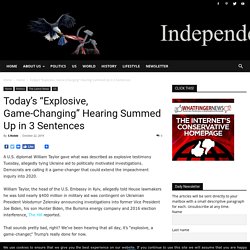 Democrats are calling it a game-changer that could extend the impeachment inquiry into 2020. William Taylor, the head of the U.S. Embassy in Kyiv, allegedly told House lawmakers he was told nearly $400 million in military aid was contingent on Ukrainian President Volodymyr Zelensky announcing investigations into former Vice President Joe Biden, his son Hunter Biden, the Burisma energy company and 2016 election interference, The Hill reported. That sounds pretty bad, right? We’ve been hearing that all day, it’s “explosive, a game-changer,” Trump’s really done for now. Allegedly, Taylor’s testimony confirmed that there was indeed a quid pro quo and drew a direct line to Donald Trump. 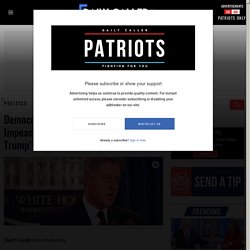 President Donald Trump similarly compared the impeachment inquiry he’s facing to a lynching, and Democrats quickly condemned his comment as racist. “It makes you no better than those who burn crosses. It makes you no better than those who wear hoods and white robes,” Democratic Texas Rep. Al Green said Tuesday. In December 1998, congressional representatives debated whether or not to impeach a president for the first time since the House voted to impeach President Andrew Johnson on Feb. 24, 1868, according to The New York Times. Democratic Illinois Rep. Former Democratic Michigan Rep. “Impeachment was designed to rid this nation of traitors and tyrants, not attempts to cover up an extramarital affair,” Conyers added in 1998.

Lawless Democrats won't let any Republicans see the transcripts. We hope the Republicans have been bringing tape recorders into the Schiff committee hearings since there is no other way they will be able to recall what went on in the hearings nor will they be able to counter any lies. 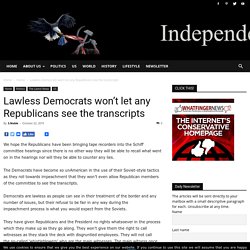 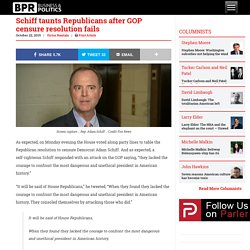 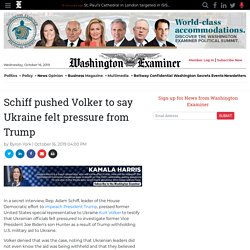 Adam Schiff, leader of the House Democratic effort to impeach President Trump, pressed former United States special representative to Ukraine Kurt Volker to testify that Ukrainian officials felt pressured to investigate former Vice President Joe Biden's son Hunter as a result of Trump withholding U.S. military aid to Ukraine. Volker denied that was the case, noting that Ukrainian leaders did not even know the aid was being withheld and that they believed their relationship with the U.S. was moving along satisfactorily, without them having done anything Trump mentioned in his notorious July 25 phone conversation with Ukrainian President Volodymyr Zelensky.

When Volker repeatedly declined to agree to Schiff's characterization of events, Schiff said, "Ambassador, you're making this much more complicated than it has to be. " The interview took place Oct. 3 in a secure room in the U.S. State Department official tells Congress he raised concerns over Burisma corruption in 2016. Chuck Ross, DCNF A senior State Department official told Congress on Tuesday that he had concerns in 2016 with corruption involving Burisma Holdings, the Ukrainian energy firm linked to Hunter Biden, two sources familiar with his testimony told the Daily Caller News Foundation. 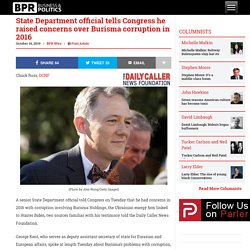 George Kent, who serves as deputy assistant secretary of state for Eurasian and European affairs, spoke at length Tuesday about Burisma’s problems with corruption, the two sources told the DCNF. They shared details of the deposition on condition of anonymity. "Crazy Nancy" Claims "Trump is Goading Us to Impeach Him"

VIDEO: Newt Gingrich “The Left is in no way running a fair impeachment process” Schiff says Mulvaney walk-back not 'the least bit credible' Impeachment Pollsters Prefer to Poll Democrats As Much As Possible. President Trump has every right to be angry. 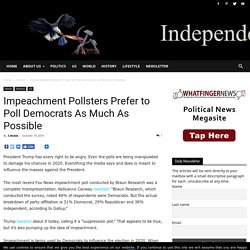 Even the polls are being manipulated to damage his chances in 2020. Everything the media says and does is meant to influence the masses against the President. The most recent Fox News impeachment poll conducted by Braun Research was a complete misrepresentation. Kellyanne Conway tweeted: “Braun Research, which conducted the survey, noted 48% of respondents were Democrats. But the actual breakdown of party-affiliation is 31% Democrat, 29% Republican and 38% independent, according to Gallup.” Trump tweeted about it today, calling it a “suppression poll.” Impeachment: The Speech Nancy Pelosi Wished She Never Gave. Transcript of Speech of Rep. Nancy Pelosi on December 18, 1998 during the impeachment proceedings for then President Bill Clinton: Today the republican majority is not judging the President Clinton with fairness, but impeaching him with the vengeance.

In the investigation of the President, fundamental principles which Americans hold dear, privacy, fairness, checks and balances have been seriously violated. And why? Hemingway “Adam Schiff Flip-Flopped On Whistleblower Testimony After Reports Of Coordination” In a new Op-Ed for the Federalist, Mollie Hemingway shows how Adam Schiff flip-flopped on the Whistleblowers testimony coincided with reports coordination. Schiff says committees will eventually make impeachment inquiry transcripts public. FNC's Napolitano: Dems' Impeachment Inquiry Is Following the Constitution. On Wednesday, Fox News Channel’s legal analyst Judge Andrew Napolitano released his “Judge Napolitano’s Chambers” video, in which he said the impeachment inquiry currently underway was following the Constitution.

Napolitano said, “Is the impeachment process fair? That is not an easy question to answer. Democrats 'leaking like mad' in impeachment inquiry and 'it's working,' Brit Hume says. House Democrats leading the Trump impeachment inquiry have been able to boost their cause by leaking details of closed-door meetings, according to Brit Hume. "The Democrats with this impeachment issue -- they're winning," Hume claimed Wednesday on "The Story. " "This proceeding behind closed doors with a multitude of leaks coming that all point basically in the same direction, which is 'Trump's guilty', have been pouring out of these behind-closed-door sessions.

" Hume pointed to an ethics complaint previously filed against Rep. Devin Nunes, R-Calif., for allegedly leaking classified information related to the Russia investigation as a reason why Republicans have not been sharing as much information. In March 2017, Nunes held a news conference in which he discussed viewing intelligence reports in which the names of Trump associates were "unmasked" by then-National Security Adviser Susan Rice in the final weeks of the Obama administration. Schiff Pressured Witness to Claim Trump Bullied Ukraine to Probe Biden, Report Shows. On 17th October 2019 @ 7.00pm © press A top US diplomat has reportedly testified that Democratic Rep. Pelosi: 'The Voters Are Not Going to Decide' Impeachment Issue. Schiff: Mulvaney comments on Ukraine aid have made things 'much, much worse'

Document: Schiff Staffer Met Impeachment Witness on Ukraine Trip. The Atlantic Council is funded by and works in partnership with Burisma, the natural gas company at the center of allegations regarding Joe Biden and his son, Hunter Biden.