Life of the Civil War Soldier in the Army. Family Life during the Civil War. White families in Virginia first confronted the war's impact with the enlistments of their male kin. 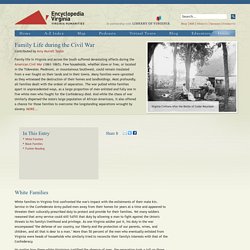 Service in the Confederate Army pulled men away from their homes for years at a time and appeared to threaten their culturally prescribed duty to protect and provide for their families. Yet many soldiers reasoned that army service could still fulfill that duty by allowing a man to fight against the Union's threats to his family's livelihood and privilege. As one Virginia soldier put it, his duty in the war encompassed "the defense of our country, our liberty and the protection of our parents, wives, and children, and all that is dear to a man. " More than 50 percent of the men who eventually enlisted from Virginia were heads of households who similarly tried to reconcile their family's interests with that of the Confederacy.

No matter how these white Virginians justified the absence of men, the separation took a toll on those left behind. The American Civil War for Kids and Teachers - Events Leading Up To, The Civil War, also called the War of Northern Agression and the War Between the States 1861-1865 and Reconstruction for Kids and Teachers. American Experience. Ulysses S Grant was the biggest hero of the Civil War. 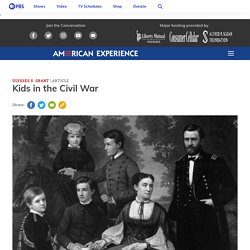 Johnny Clem might well have been the smallest. Ten years old when he ran away from home and joined the second Michigan Regiment, the drummer boy won fame at the battle of Shiloh, where he put down his drum, picked up a gun, and shot a Confederate colonel. All across the Union, Clem was celebrated as a hero. But Johnny Clem wasn't the only young person to be affected by the Civil War. In fact, it would be hard to find a kid that wasn't. When war broke out in 1861, kids across the North and the South said goodbye to their fathers, brothers, uncles, and cousins -- or joined the military themselves.

It's hard to imagine the horrors teenage soldiers experienced. If the greatest horrors of the war occurred on the battlefields, civilians experienced their own shares of hardship. In the South, where most of the war's major battles were fought, civilian children endured even more misery. American Civil War Facts. What started the war? 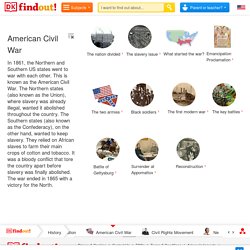 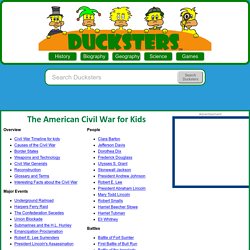