Magnesium Health Benefits & Risks You Should Know About. Are you near a AA battery? 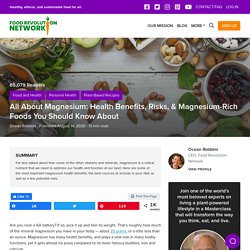 If so, pick it up and feel its weight. That’s roughly how much of the mineral magnesium you have in your body — about 25 grams, or a little less than an ounce. Magnesium has many health benefits, and plays a vital role in many bodily functions, yet it gets almost no press compared to its more famous buddies, iron and calcium. While magnesium abounds in nature — it’s the seventh most common element on earth, by weight — we aren’t getting nearly enough of it to achieve and maintain optimal health. Is Magnesium the Underlying Cause and Treatment for Everything? This is magnesium. 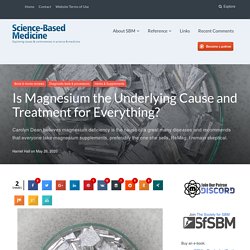 Do you need more of it? I was recently asked about the book The Magnesium Miracle, by Carolyn Dean. The word “miracle” in the title put me off, but I wanted to read it and try to understand what it was claiming. I wanted to, but I couldn’t. I’m good at reading. The author is an MD but also a naturopath (ND). Instead of laying out her arguments in an orderly fashion and building a solid case based on evidence, she takes a scattershot approach, jumping from topic to topic. Every time I started to think she was sustaining a train of thought and getting into some meat that I could investigate by checking her references and looking for other confirming or disconfirming evidence, she was off on a new tangent, often saying something that made me cringe. Gleanings Although I found the book unreadable, I was able to learn a great deal by skimming. Supplements 101 Magnesium. Magnesium Deficiency Symptoms & How to Treat.

Magnesium is arguably the most important mineral in the body, which is why magnesium deficiency can be such an issue. 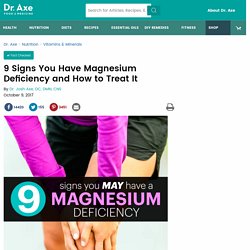 According to Norman Shealy, MD, Ph.D, an American neurosurgeon and a pioneer in pain medicine, “Every known illness is associated with a magnesium deficiency and it’s the missing cure to many diseases.” Not only does magnesium help regulate calcium, potassium and sodium, but it’s essential for cellular health and a critical component of over 300 biochemical functions in the body. Even glutathione, your body’s most powerful antioxidant that has even been called “the master antioxidant,” requires magnesium for its synthesis. Archives - Page 6 of 55. Magnesium Decreases Death Rates. Magnesium, The Most Important Mineral for Improving Your Health. Magnesium Could be in Charge of Your Vitamin D Levels: Supplements Lower High and Increases Low 25OHD Levels - SuppVersity: Nutrition and Exercise Science for Everyone. If you subscribed to the @SuppVersity Facebook Page, you will have read the news, already: "Magnesium status and supplementation influence vitamin D status and metabolism" (Dai 2018) - that is both the title and the main results of a recent study from the Vanderbilt University that is important enough to make it from the short format on Facebook to a detailed SuppVersity article of its own - the article at hand ;-) The 25OHD-balancing effects Dai et al. observed in their 180 participants (aged 40–85 y) could after all do much more than point towards a reason why everyone and his mama seems to be D-ficient - it could force us to redefine what "optimal" 25OHD levels are - significantly below those many Internet "health experts" recommend. 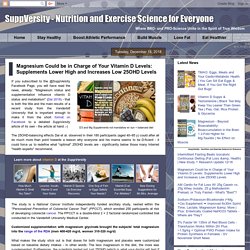 Learn more about vitamin D at the SuppVersity. Magnesium - Beyond Bioavailability: Bioaccumulation in the Brain 1.2-Fold Higher for Mg-Taurate. You will remember that the year 2017 saw the publication of the first study to lend credible support to the use of transdermal magnesium. 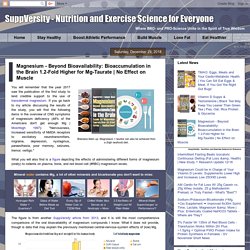 If you go back to my article discussing the results of the study, you will find the following items in the overview of CNS symptoms of magnesium deficiency (48% of the Americans don't get enough Mg | Moshfegh 1997): "Nervousness, increased sensitivity of NMDA receptors to excitatory neurotransmitters, migraine, depression, nystagmus, paraesthesia, poor memory, seizures, tremor, vertigo. " What you will also find is a figure depicting the effects of administering different forms of magnesium (orally) to rodents on plasma, bone, and red blood cell (#RBC) magnesium levels.

Mineral water contains Mg, a lot of other minerals and bicarbonate you don't want to miss: Magnificent Magnesium. Best Sources of Magnesium: The Miracle Mineral - Dr. Spencer Nadolsky. It all started with a sensational meme that said something like “Did you know magnesium is used in over 300 processes in the body? 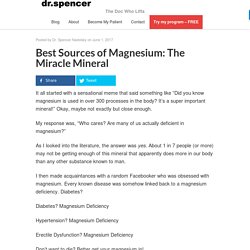 Are You Magnesium Deficient? Know the Symptoms (and how to fix them!) Low magnesium levels make vitamin D ineffective: Up to 50 percent of US population is magnesium deficient. There is a caveat to the push for increased Vitamin D: Don't forget magnesium. 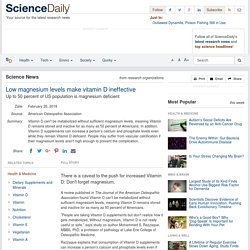 A review published in The Journal of the American Osteopathic Association found Vitamin D can't be metabolized without sufficient magnesium levels, meaning Vitamin D remains stored and inactive for as many as 50 percent of Americans. "People are taking Vitamin D supplements but don't realize how it gets metabolized. Without magnesium, Vitamin D is not really useful or safe," says study co-author Mohammed S. Razzaque, MBBS, PhD, a professor of pathology at Lake Erie College of Osteopathic Medicine. 9 Signs You Have Magnesium Deficiency and How to Cure It. Should You Be Taking Magnesium Supplements? Considering all of the important roles that magnesium plays in the body — and the fact that a magnesium deficiency is one of the leading nutrient deficiencies in adults with an estimated 80 percent being deficient in this vital mineral — it’s a good idea to consider taking magnesium supplements regularly and eating magnesium-rich foods. 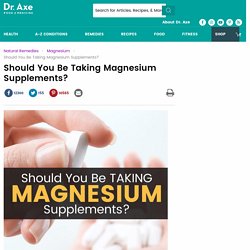 STOP! Don't forget to download the Top 9 Health Benefits of Magnesium PDF Almost there! Please complete this form and click the button below to gain instant access. Enter your email to download this free guide right now. We hate SPAM and promise to keep your email address safe. Before You Go, Check Out My Upcoming Webinar: Strategies To Heal Leaky Gut and Overcome Adrenal And Thyroid Issues! 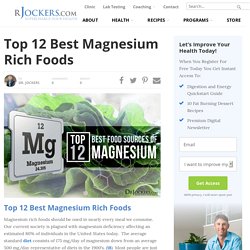 Our current society is plagued with magnesium deficiency affecting an estimated 80% of individuals in the United States today. The average standard diet consists of 175 mg/day of magnesium down from an average 500 mg/day representative of diets in the 1900’s. (18) Most people are just not consuming enough magnesium rich foods. Dr. Norman Shealy, M.D., Ph.D. is an American neurosurgeon and a pioneer in pain medicine. When the majority of people don’t meet the recommended daily allowance (RDA) for an essential nutrient, the health consequences are severe and extremely prevalent today. 10 Evidence-Based Health Benefits of Magnesium. 10 Signs Of Magnesium Deficiency - DrJockers.com. 10 Signs Of Magnesium Deficiency Magnesium is one of the most abundant minerals in the human body and is used in over 300 different physiological processes. 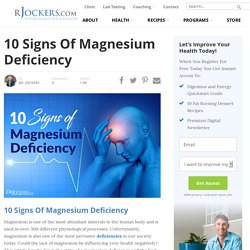 Unfortunately, magnesium is also one of the most pervasive deficiencies in our society today. Could the lack of magnesium be influencing your health negatively? This article breaks down the signs of a magnesium deficiency and the best ways to get more in your diet. According to American neurosurgeon Norman Shealy, MD, PhD, almost every known disease is associated with a magnesium deficiency. Magnesium and the Brain: The Original Chill Pill. Whole Health Source: Magnesium and Insulin Sensitivity. From a paper based on US NHANES nutrition and health survey data (1): During 1999–2000, the diet of a large proportion of the U.S. population did not contain adequate magnesium...