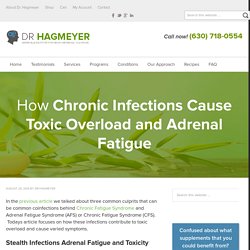 Todays article focuses on how these infections contribute to toxic overload and cause varied symptoms. Stealth Infections Adrenal Fatigue and Toxicity Stealth infections continuously place a burden on the body and, over a period of time, lead to an overload of toxins in the body. Chronic fatigue syndrome from vagus nerve infection: a. Michael VanElzakker Ph.d Talks – About the Vagus Nerve Infection Hypothesis and Chronic Fatigue Syndrome (ME/CFS) - Simmaron Research. An Interview with Michael VanElzakker Ph.d Van Elzakker’s hypothesis could explain several of the mysteries associated with chronic fatigue syndrome Michael VanElzakker’s Vagus Nerve Infection Hypothesis (VNIH) for Chronic Fatigue Syndrome may be the most intriguing hypothesis to come along in the last twenty years. 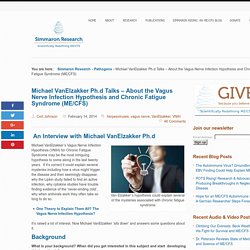 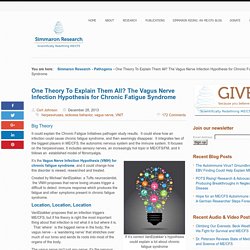 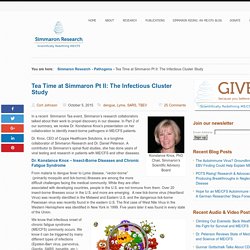 In Part 2 of our summary, we review Dr. Konstance Knox’s presentation on her collaboration to identify insect-borne pathogens in ME/CFS patients. Dr. Knox, CEO of Coppe Healthcare Solutions, is a longtime collaborator of Simmaron Research and Dr. Could Crippled Herpesviruses Be Contributing to Chronic Fatigue Syndrome (ME/CFS) and Other Diseases? We provide evidence…. that herpesviruses dUTPases…(have) unique immunoregulatory functions that can alter the inflammatory microenvironment and thus exacerbate the immune pathology of herpesvirus-related diseases including myalgic encephalomyelitis/chronic fatigue syndrome, autoimmune diseases, and cancer. 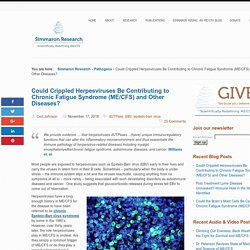 Williams et. al. Most people are exposed to herpesviruses such as Epstein-Barr virus (EBV) early in their lives and carry the viruses in latent form in their B cells. Sometimes – particularly when the body is under stress – the immune system slips a bit and the viruses reactivate, causing anything from no symptoms at all to – more rarely – being associated with such devastating disorders as autoimmune diseases and cancer. One study suggests that glucocorticoids released during stress tell EBV to come out of hibernation. Explaining ME/CFS? Prusty / Naviaux Study Ties Infections to Energy Breakdowns. Unexpected synchronies are always a good sign. 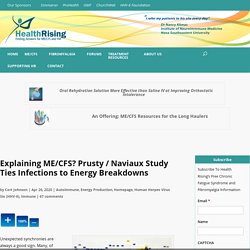 Many, of course, are familiar with Bob Naviaux, MD, PhD from the University of California, San Diego (UCSD). Naviaux’s metabolomic work and his Cell Danger Response (CDR) hypothesis have opened up new possible ways of understanding ME/CFS, autism and other diseases. Naviaux is best known for his metabolomic work, but what most people don’t know is that Naviaux is also a Salk-trained virologist, who invented some early retroviral gene transfer vectors, and was trained, to boot, in natural killer cell biology – a key topic in ME/CFS.

Bhupesh Prusty, PhD of the University of Würzburg in Germany, is newer on the scene but has been raising eyebrows with his proposal that herpesviruses like HHV-6 (and other viruses as well) may be knocking the mitochondria in ME/CFS patients for a loop. They chose, what else, herpesviruses (HHV-6, HHV-7) to test their hypothesis. Herpes viruses form a large and diverse group. The Study The Gist. Chronic intestinal candidiasis as a possible etiological factor in the chronic fatigue syndrome. - PubMed - NCBI. Living With ME/CFS: Treating Yeast Overgrowth/Candida. I have mentioned several times since early October that I’ve been worse than usual and going through a bad period. 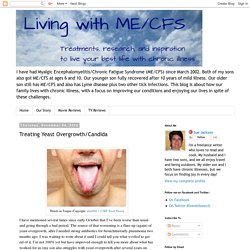 The source of that worsening is a flare-up (again) of yeast overgrowth, after I needed strong antibiotics for bronchitis/early pneumonia two months ago. I was waiting to write about it until I could tell you what worked to get rid of it. I’m not 100% yet but have improved enough to tell you more about what has worked for us (my son also struggles with yeast overgrowth after several years on antibiotics for Lyme). First, some basics. Many, many people with ME/CFS have yeast overgrowth, even if they don’t realize it. Symptoms of yeast overgrowth can vary widely. However, many of the symptoms of yeast overgrowth are less obvious and far more debilitating. At first, I tried all the usual approaches (see list below) but to no avail – there was still visible thrush in my mouth and I still felt absolutely awful and was barely able to function. Take strong probiotics. Common Viruses That Can Trigger Chronic Fatigue (CFS)/ Myalgic Encephalomyelitis │The Best Viral Infection Treatment Approach.

How to boost your immune system to increase energy with Guillermo Ruiz. Even "Minor" Infections Can Cause Chronic Fatigue Syndrome (ME/CFS) - Simmaron Research. Giardia hasn’t historically ranked high as a potential cause of chronic fatigue syndrome (ME/CFS). 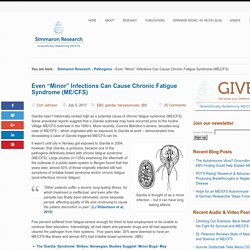 Some anecdotal reports suggest that a Giardia outbreak may have occurred prior to the Incline Village ME/CFS outbreak in the 1980’s. More recently, Corinne Blandino’s severe, decades long case of ME/CFS – which originated with an exposure to Giardia at work – demonstrated how devastating a case of Giardia triggered ME/CFS can be. Giardia is thought of as a minor infection – but it can have long lasting effects. It wasn’t until city in Norway got exposed to Giardia in 2004, however, that Giardia, a protozoa, became one of the pathogens definitively linked with chronic fatigue syndrome (ME/CFS). Infection, Autoimmunity and PANDA's: Dr. Hornig on Chronic Fatigue Syndrome at Dr. Klimas' NSU Conference - Simmaron Research. Quite the Resume Dr Mady Hornig comes with quite a resume. 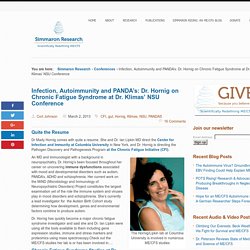 She and Dr. Ian Lipkin MD direct the Center for Infection and Immunity at Columbia University in New York, and Dr. Hornig is directing the Pathogen Discovery and Pathogenesis Program at the Chronic Fatigue Initiative (CFI). The Hornig/Lipkin lab at Columbia University is involved in numerous ME/CFS studies An MD and immunologist with a background in neuropsychiatry, Dr.

Dr. Is Helicobacter Pylori Infection Prevalent in ME/CFS? — Dr Courtney Craig. Autonomic dysfunction may result from H. pylori infection in part via the connection between the gut and the autonomic nervous system—the enteric nervous system. 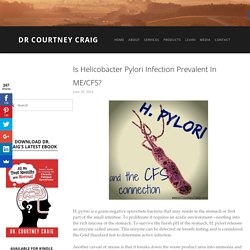 In a 2004 study of over 100 patients with atypical chest pain and heart rate variability, a positive association between H. pylori infection and cardiovascular symptoms was found (3). Could there be a link between H. pylori infection and the autonomic dysfunction seen in CFS and POTS? Small intestinal bowel overgrowth is common place in both CFS and fibromyalgia. Many suggest it is a causative mechanism in fibromyalgia. Chronic fatigue syndrome: Inflammation, immune function, and neuroendocrine interactions. Article First Online: Abstract Investigations into the underlying cause of chronic fatigue syndrome have advanced the field considerably in the past year. Gene microarray data have led to a better understanding of pathogenesis. Recent research has evaluated genetic signatures, described biologic subgroups, and suggested potential targeted treatments. Keywords. Heart attacks, CFS, herpes virus infection and the vagus nerve. I came across upon some very interesting research regarding the vagus nerve and chronic viral infections.

This happened almost the exact same day someone very close to me had a heart attack shortly after a herpes virus infection. He is now out of danger and well into recovery, but his words stayed with me: “I think the herpes virus got a hold of my vagus nerve and that is why I had a heart attack”. I thought to myself, it is entirely possible! The vagus nerve is the heart of the parasympathetic nervous system, the anti-stress system. The vagus nerve is your calming and relaxing nerve which goes from your brain and down to your abdomen, dividing itself into multiple branches that reach your throat, your heart, and all your viscera. Med Hypotheses. 2013 Jun 18.

Acetylcholine is a neurotransmitter responsible for learning and memory. Stimulating your vagus nerve sends acetylcholine throughout your body – not only relaxing you – but also turning down the fires of inflammation. Myalgic encephalomyelitis, chronic fatigue syndrome: An infectious disease. - PubMed - NCBI. ME, CFS support and research. Fresh evidence points to a cause and possible treatments for chronic fatigue syndrome. Retroviruses and Chronic Fatigue Syndrome.

When symptoms of either AFS or CFS are present and treatment directed on the adrenal glands have been unsuccessful, tests should be done to determine if Epstein – Barr virus (EBV), Lyme Disease, and Candida and Molds are contributing factors. To start us off, let’s take a look at one of the most common infections; EBV. Infections Seen With Adrenal Fatigue.