In Alzheimer Research, Glucose Metabolism Moves to Center Stage. Areas or patterns of reduced glucose metabolism are often seen in brain scans of patients with Alzheimer disease and other dementias. 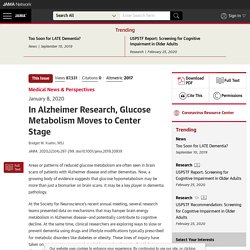 Now, a growing body of evidence suggests that glucose hypometabolism may be more than just a biomarker on brain scans: it may be a key player in dementia pathology. At the Society for Neuroscience’s recent annual meeting, several research teams presented data on mechanisms that may hamper brain energy metabolism in Alzheimer disease—and potentially contribute to cognitive decline. At the same time, clinical researchers are exploring ways to slow or prevent dementia using drugs and lifestyle modifications typically prescribed for metabolic disorders like diabetes or obesity. These lines of inquiry have taken on new urgency as several amyloid-targeting therapies for Alzheimer disease have failed in clinical trials, leading to questions about whether the so-called amyloid hypothesis may be flawed. Dementia--Risk Factors. Poor Sleep and Alzheimer's Disease Risk. 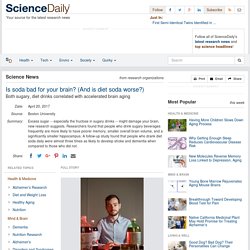 Together we consumed nearly 11 million metric tons of it in 2016, according to the US Department of Agriculture, much of it in the form of sugar-sweetened beverages like sports drinks and soda. Now, new research suggests that excess sugar -- especially the fructose in sugary drinks -- might damage your brain. Researchers using data from the Framingham Heart Study (FHS) found that people who drink sugary beverages frequently are more likely to have poorer memory, smaller overall brain volume, and a significantly smaller hippocampus -- an area of the brain important for learning and memory. But before you chuck your sweet tea and reach for a diet soda, there's more: a follow-up study found that people who drank diet soda daily were almost three times as likely to develop stroke and dementia when compared to those who did not.

"Maybe good old-fashioned water is something we need to get used to," she adds. Ultra-Processed Foods and Alzheimer’s? – Lacto Bacto. Drinking Coffee Daily and Alzheimer’s Disease.

Alzheimer's and High Blood Sugar. Alzheimer's Disease: A Diabetic Disorder of the Brain. Evidence of a similarity in the way insulin signaling works in the brian and in the pancreas of diabetic patients leads to promising new treatment. 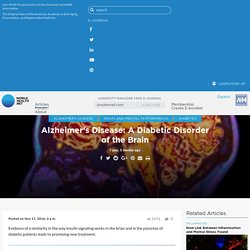 Researchers at Tohoku University Graduate School of Pharmaceutical Sciences headed by Dr. Shigeki Moriguchi together with Professor Kohji Fukunaga, have concluded that Alzheimer's disease can be described as a diabetic disorder of the brain. The team noticed a similarity in how insulin signaling works in the brain as well as in the pancreas of diabetic patients. Their study was published in ScienceDaily on November 9, 2016. Dr. Employing a mouse model, the researchers found that Memantine improved memory-related behaviors in the mice and mediated the action of the anti-diabetic drug in the peripheral tissues. Does Low Cholesterol Cause Alzheimer’s? Marathon Drugs Increases Price 70-Fold – 2/10/17 More predation by pharma. 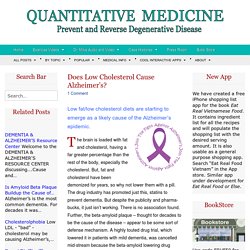 Marathon has gotten a decades old muscular dystrophy drug, deflazacort, approved and is charging $89,000 a year for it. Thyroid Problems, Alzheimer's, and Cognitive Decline. Inflammation in middle age may be tied to brain shrinkage decades later. Thyroid Problems, Alzheimer's, and Cognitive Decline. Link between brain, bone in Alzheimer's disease identified. Sleep disorders may increase cognitive problems particularly in those at risk for Alzheimer's. Role of vascular disease in development of Alzheimer's disease. Vascular risk factors and Alzheimer’s disease: A new therapeutic opportunity?

Molecular link between post-traumatic stress disorder and Alzheimer’s disease. Relative risk of Alzheimer's between men and women: Record corrected. Psychiatric disorders do not increase risk of Alzheimer's disease. So my brain amyloid level is elevated: What does that mean? Brain-Slowing Medications to Avoid if You're Worried About Memory. Recently, while I was at a family celebration, several people mentioned memory concerns to me. 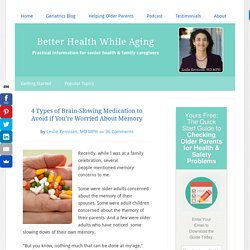 Some were older adults concerned about the memory of their spouses. Some were adult children concerned about the memory of their parents. And a few were older adults who have noticed some slowing down of their own memory. “But you know, nothing much that can be done at my age,” remarked one man in his eighties. Wrong. First among them: identify medications that make brain function worse. This is not just my personal opinion. And the expert authors of the National Academy of Medicine report on Cognitive Aging agree: in their Action Guide for Individuals and Families, they list “Manage your medications” among their “Top 3 actions you can take to help protect your cognitive health as you age.” Unfortunately, many older adults are unaware of this recommendation. Every older adult and family should know how to optimize brain function. 1. 2. Some studies have linked these drugs to dementia. 3. 4. Calcium supplements linked to dementia risk in women with certain health conditions.

According to a new study, calcium supplements may be associated with an increased risk of dementia in older women who have had a stroke or other signs of cerebrovascular disease. 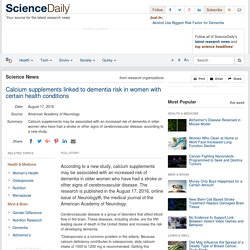 The research is published in the August 17, 2016, online issue of Neurology®, the medical journal of the American Academy of Neurology. Cerebrovascular disease is a group of disorders that affect blood flow in the brain. These diseases, including stroke, are the fifth leading cause of death in the United States and increase the risk of developing dementia. "Osteoporosis is a common problem in the elderly. Because calcium deficiency contributes to osteoporosis, daily calcium intake of 1000 to 1200 mg is recommended. The study involved 700 dementia-free women between the ages of 70 and 92 who were followed for five years. Cholesterol-fighting drugs lower risk of Alzheimer's disease. 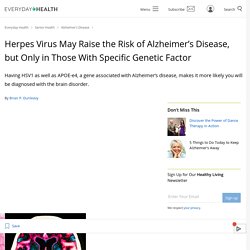 At issue is coverage of a new study, published on October 19, 2018, in the journal Frontiers in Aging Neuroscience. For the paper, Ruth Itzhaki, PhD, professor emeritus of molecular neurobiology at the University of Manchester and honorary senior research fellow at the University of Oxford in the United Kingdom, compiled findings from three different studies (performed in Taiwan) including more than 8,000 adults over age 50, all of whom had either herpes simplex virus 1 or 2 (HSV1 or HSV2), and comparing them with 25,000 subjects who did not have the herpes virus. 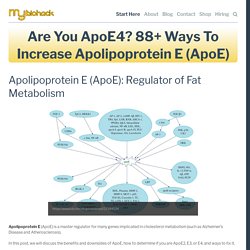 This gene is notoriously known for its correlation to Late Onset Alzheimer's Disease (LOAD) and heart disease. Like the name implies ApoE is protein that exerts anti-inflammatory effects on the body immune system cardiovascular system in brain. Loss of binding of this protein to certain receptors (e.g. ApoE4) has shown to be implicated in various diseases. In the body, ApoE: R Circulates in the blood as a component of VLDL, chylomicrons and a subclass of HDL - having antioxidant, anti-inflammatory and anti-atherogenic propertiesModulates cholesterol metabolismModulates liver function.