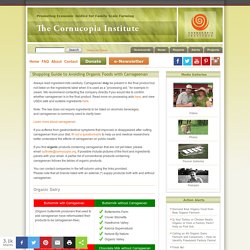 Carrageenan may be present in the final product but not listed on the ingredients label when it is used as a “processing aid,” for example in cream. We recommend contacting the company directly if you would like to confirm whether carrageenan is in the final product. Read more on processing aids here, and view USDA safe and suitable ingredients here. Note: The law does not require ingredients to be listed on alcoholic beverages, and carrageenan is commonly used to clarify beer. Learn more about carrageenan. If you suffered from gastrointestinal symptoms that improved or disappeared after cutting carrageenan from your diet, fill out a questionnaire to help us and medical researchers better understand the effects of carrageenan on public health.

If you find organic products containing carrageenan that are not yet listed, please email cultivate@cornucopia.org. You can contact companies in the left column using the links provided. Organic Dairy. BPA Toxic Effects & Symptoms: How BPA Destroys Your Body. Bisphenol A (known as BPA) is a carbon-based, synthetic compound that is ubiquitous in modern-day life. 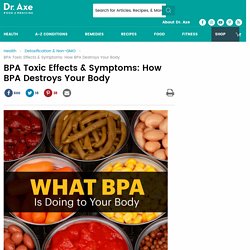 It’s used in everything from shatter-resistant plastic water bottles and food storage containers to cash register receipts and canned food and drink liners. It’s even in coffee cans and beer kegs. Despite it being literally impossible to fully avoid, BPA toxic effects are now very well documented in medical literature. And the findings are not appetizing. The science shows this hormone-disrupting chemical causes widespread damage throughout our bodies.

Triclosan: Is this Hazardous Toxin in Your Toothpaste? Triclosan is a “super chemical” meant to fight the spread of germs, but with the emergence of drug-resistant superbugs, the question is whether it really fights the good fight or just creates bigger problems. 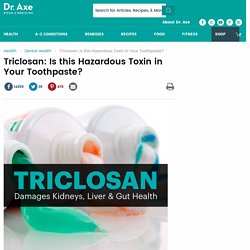 The answer is pretty straightforward. 7 Chemicals Banned in Europe That Are Allowed in the USA. 6-Step Checklist to Avoid the Worst Ingredients. Exercise and keeping an eye on calories goes a long way in keeping you healthy, but to truly protect your well-being, you need to start actively avoiding the worst ingredients hiding out in the food system. 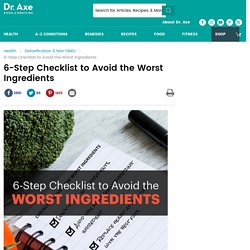 You must be aware of the dangerous additives and enhancers manufacturers pump into food to keep us hooked and addicted to their products. Flavor enhancers, preservatives, sweeteners, synthetic colors and manmade fats and chemicals commonly hide out in the ultra-processed foods we eat. Food Additives That May Make our Gut Leaky. Crohn’s disease is an autoimmune disorder that affects more than a million Americans. 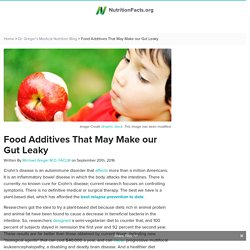 It is an inflammatory bowel disease in which the body attacks the intestines. There is currently no known cure for Crohn’s disease; current research focuses on controlling symptoms. There is no definitive medical or surgical therapy. The best we have is a plant-based diet, which has afforded the best relapse prevention to date. Researchers got the idea to try a plant-based diet because diets rich in animal protein and animal fat have been found to cause a decrease in beneficial bacteria in the intestine. VeggiePharm: What's in your snack? Titanium Dioxide. I've been warning about the dangers of processed foods for many years now. 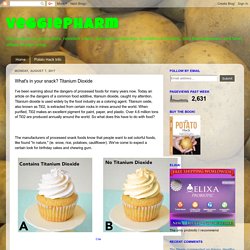 Today an article on the dangers of a common food additive, titanium dioxide, caught my attention. Titanium dioxide is used widely by the food industry as a coloring agent. Titanium oxide, also known as Ti02, is extracted from certain rocks in mines around the world. When purified, Ti02 makes an excellent pigment for paint, paper, and plastic. Over 4.6 million tons of Ti02 are produced annually around the world. The manufacturers of processed snack foods know that people want to eat colorful foods, like found "in nature," (ie. snow, rice, potatoes, cauliflower). Label Check! 7 Food Additives that Trigger Leaky Gut. Carrageenan: Causes Colitis in Rats, but Safe for Humans? Aflatoxin: How to Avoid this Common-Food Carcinogen. There are many different types of molds and fungus that can grow in food, including various species of mycotoxins, but aflatoxin has gained attention more than most others because studies have found clear evidence of its potential for causing carcinogenic effects. 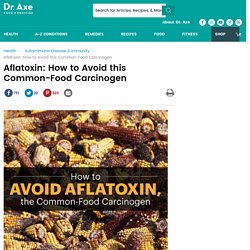 In animal studies, high levels of aflatoxin consumption has been shown to be poisonous, and in human observation studies aflatoxin consumption correlates with an increased the risk for certain illnesses and dangerous symptoms. Over the last 100 years, there are have also been several occurrences when large populations of livestock (cattle, ducks, chicken, etc.) have died due to contamination of their food supply, especially peanut flour or cottonseed, which can sometimes become home to a dozen different strains of aflatoxin. (4) Unfortunately, aflatoxin makes its way into some popular “healthy” foods that aren’t actually healthy.

Is Aflatoxin Regulated? Aflatoxin Symptoms & Health Risks. 2017 Dirty Dozen List: Are You Eating the Most Pesticide-Laden Produce? Environmental Working Group released it’s 2017 Dirty Dozen list and it serves as a solid reminder that we still have a lot of work to do when it comes to cleaning up the food system. 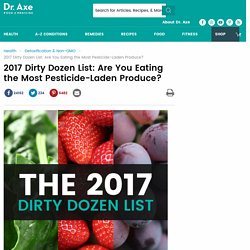 This year, the annual report found that almost 70 percent of 48 non-organic samples tested positive for at least one pesticide. (In many cases, the numbers were much higher.) And get this: A single strawberry sample harbored 20 different pesticide residues. Guar Gum: Is This Food Additive Harmful or Helpful? Guar gum (also sometimes called gellan gum) is a common powdered product used to stabilize, emulsify and thicken the texture of certain foods and industrial products — such as bottled coconut or almond milk, yogurts, soups, fiber supplements, and body lotions. 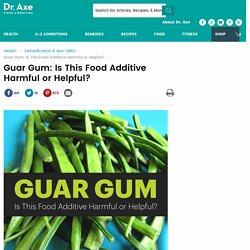 There are numerous uses for guar gum spanning several industries, and today it’s estimated that food-industry applications account for the vast majority (more than 70 percent) of the world’s supply of guar gum. Considered to be a type of galactomannan, guar gum is produced in a similar manner to other natural seed gums that are created by milling the endosperm (seeds) of legumes or grains. While guar gum doesn’t necessarily provide many essential nutrients, it’s low in calories and high in fiber, which may help you feel fuller after eating. Guar absorbs a large amount of liquid in the digestive system.