This page cannot be loaded. You may need to log in to view it, or it may be unavailable at this time. If you do not have an account, you can register here. Buy Fair. Be Fair. Read to Feed: A Unique Reading Incentive Program for Kids. Strangers Becoming Friends Through Food. Photo Essay: 5 Girls who said NO to child marriage in West Bengal. By Melany Grout, Landesa The Girls Project, a partnership between the government of West Bengal and Landesa, aims to keep girls in school and reduce their vulnerability to child marriage. 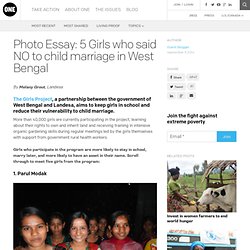 More than 40,000 girls are currently participating in the project, learning about their rights to own and inherit land and receiving training in intensive organic gardening skills during regular meetings led by the girls themselves with support from government rural health workers. Girls who participate in the program are more likely to stay in school, marry later, and more likely to have an asset in their name. Scroll through to meet five girls from the program: Human Footprint Interactives from National Geographic. Ali_Grades_6_to_8.pdf. Fairtrade Blog - From cotton fields to cutting floors: it’s time to revolutionise the fashion industry.

What are you wearing? Map your clothes and share your photos. Five-Minute Film Festival: Teaching Kids about Global Poverty. Break The Bag Habit - Take the pledge today! Ali_Grades_6_to_8. Ethics program aims to teach children to 'think well' Jackfruit heralded as 'miracle' food crop. It's big and bumpy with a gooey interior and a powerful smell of decay – but it could help keep millions of people from hunger. 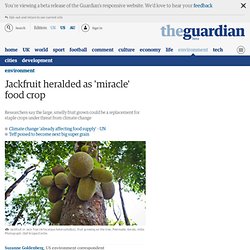 Researchers say jackfruit – a large ungainly fruit grown across south and south-east Asia – could be a replacement for wheat, corn and other staple crops under threat from climate change. The World Bank and United Nations warned recently that rising temperatures and unpredictable rainfall had already reduced yields of wheat and corn, and could lead to food wars within the decade. Now researchers say jackfruit could help provide the solution. Jackfruit is the largest known treeborne fruit. Global Oneness Project. New Trailer For 'Mandela: Long Walk To Freedom' Brings The Struggle For Freedom To Big Screen. PGA Names Best Documentary Nominees. The Producers Guild of America has announced the nominees for Best Documentary. 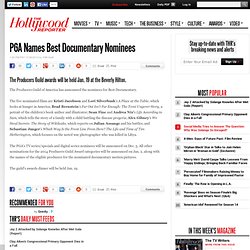 Films and Lesson Plans. The Hadzabe of Tanzania. In Life: A Natural History of the First Four Billion Years of Life on Earth, Richard Fortey wrote: There is a common thread that runs through the whole of biological existence...These molecules run through life in the same way as the musical theme runs through the last movement of Brahms's Fourth Symphony. 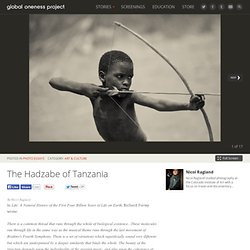 Journeys in Film. 3 Great Films for Teaching About Globalization and Modernization. Scene from the Iranian film "Children of Heaven. 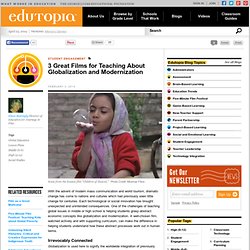 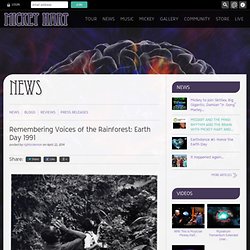 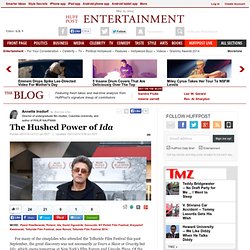 Journeys in Film. Please fill out the form and you'll see a link to download. 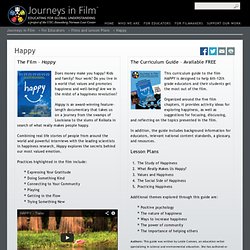 The Film – Happy Does money make you happy? Kids and family? Story of Stuff (2007, OFFICIAL Version) Flow - Water Privatization.flv. Water Wars 2: Privatization - Stuff They Don't Want You To Know. Hungry Planet: What The World Eats. Apps That Challenge Kids to Solve Environmental Issues. By Tanner Higgin, Graphite Environmental education for most adults used to mean learning a little bit about recycling and planting some trees on Arbor Day. 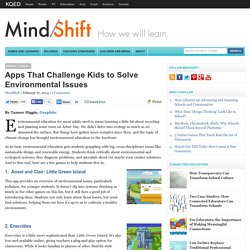 We didn’t delve into ecology as much as we skimmed the surface. But things have gotten more complex since then, and the topic of climate change has brought environmental education to the forefront. At its best, environmental education gets students grappling with big, cross-disciplinary issues like sustainable design and renewable energy. Issues on the Global Issues web site. Institute for Humane Education. The content that follows was originally published on the Institute for Humane Education website at 5 Sources for Social Justice Songs The recent death of American folk singer and activist Pete Seeger reminds us that music has always played a powerful role in social change. 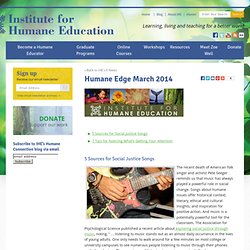 Songs about humane issues offer historical context; literary, ethical and cultural insights; and inspiration for positive action. And music is a potentially powerful tool for the classroom. The Association for Psychological Science published a recent article about exploring social justice through music, noting, ” … listening to music stands out as an almost daily occurrence in the lives of young adults.

Whether you’re a classroom teacher, parent or community activist, music can be a powerful ally. 1. “100 Songs of Protest…” offers a list of 100 songs (and accompanying music videos) that explore “a range of musical genres and many liberation movements.” 2. World Citizen. The Omnivore's Dilemma as Inquiry-Based Learning. Women's rights country by country - interactive. Behind the News. Weekdays: 20/02/2017 watch What's your question?