Hungry Planet: What The World Eats 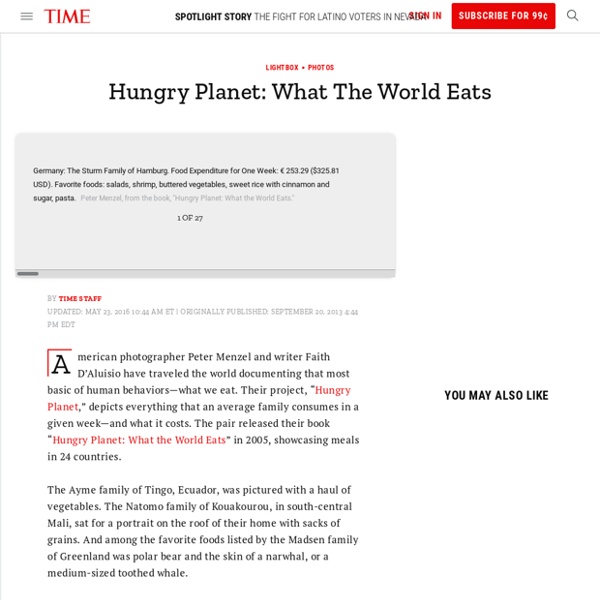 A Map Of Where Your Food Originated May Surprise You Some people may be dimly aware that Thailand's chilies and Italy's tomatoes — despite being central to their respective local cuisines — originated in South America. Now, for the first time, a new study reveals the full extent of globalization in our food supply. More than two-thirds of the crops that underpin national diets originally came from somewhere else — often far away.

Interactive tools Our world class, interactive tools are fully open source and provide you with essential data and insights into your water use. On this page: Simplified Water Footprint Calculator [direct link] Extended Water Footprint Calculator [direct link] Water Footprint Assessment Tool Is Eating Organic Really Better for You and the Environment? On average, organic food items are 47 percent more expensive than standard supermarket fare—but thanks to their purported health and environmental benefits, many shoppers still splurge on them. In fact, the total retail market for organic products in the United States was valued at over $39 billion in 2016. But while the organic industry means big business for farmers and food companies, the question still remains: Are organic foods actually better for both you and the environment? In the video below, AsapSCIENCE co-creator and host Mitchell Moffit explains why eating organic may not be the panacea most people think it is. Contrary to popular belief, an organic diet isn't chemical-free. In fact, Moffit explains, organic farmers can still use natural pesticides and fungicides to keep crop-destroying insects at bay—and studies show that they aren’t necessarily better for you or the soil than synthetic ones.

Healthy Active - Sample Daily Kilojoule and Nutrient Calculator This sample daily kilojoule and nutrient calculator is for people over the age of 19 years. It does not apply to children. Calculate your daily energy and nutrient composition. 'Global deforestation hotspot': 3m hectares of Australian forest to be lost in 15 years Australia is in the midst of a full-blown land-clearing crisis. Projections suggest that in the two decades to 2030, 3m hectares of untouched forest will have been bulldozed in eastern Australia. The crisis is driven primarily by a booming livestock industry but is ushered in by governments that fail to introduce restrictions and refuse to apply existing restrictions. And more than just trees are at stake. Australia has a rich biodiversity, with nearly 8% of all Earth’s plant and animal species finding a home on the continent. About 85% of the country’s plants, 84% of its mammals and 45% of its birds are found nowhere else.

New awesome Meat-Calculator: Check your impact on the environment A mild summer evening without a sizzling steak or a great burger on the grill? Unthinkable! America is a nation of meat eaters. Actually, Americans have the highest meat consumption in the world. Centre Africain des Ressources Naturelles (CARN) Africa’s natural resources have been the bedrock of the continent’s economy and continue to represent a significant development opportunity for her people. In 2012, natural resources accounted for 77% of total exports and 42% of government revenues Renewable Resources Close to 20 million people employed in the USD 24 billion fisheries sector,90 million depend on fisheries for livelihood,Africa is home to the second largest tropical forest,Over 70 percent of the Sub-Saharan population depend on forests and woodlands for livelihood.Land in Africa is an economic development asset as well as a social, cultural and ontological resource,It defines the social identity, the organisation of religious life, culture, gender, ethnicity and nationality.Water resources are contrasted across the continent,Africa is home to some of the highest annual rainfall in the heart of the Congo basin,It is also the second world’s driest continent.

Tasmanian salmon should be off the menu for now, says conservation group It’s one of Australia’s – and the world’s – favourite fish but Tasmanian Atlantic salmon should be off the menu for now, according to the Australian Marine Conservation Society, publishers of Australia’s independent sustainable seafood guide. On Wednesday, the AMCS downgraded the farmed fish’s rating from an amber “Think Twice” to a red “Say No” due to ongoing environmental concerns. The previous review was in 2015. Adrian Meder, the sustainable seafood program manager at AMCS, said the salmon farming industry had been enabled to expand “too far and too fast” in Macquarie Harbour, on the state’s west coast, where key players Huon Aquaculture, Tassal and Petuna lease several industrial fish pens. “We are supportive of sustainable aquaculture and this is an important source of seafood for Australia in the future, but it needs to be done within the bounds of which an environment can support,” Meder said. Meder said many of the issues had arisen because of a lack of government regulation.

Food in the Anthropocene: the EAT–<i>Lancet</i> Commission on healthy diets from sustainable food systems Food systems have the potential to nurture human health and support environmental sustainability, however our current trajectories threaten both. The EAT–Lancet Commission addresses the need to feed a growing global population a healthy diet while also defining sustainable food systems that will minimise damage to our planet. The Commission quantitively describes a universal healthy reference diet, based on an increase in consumption of healthy foods (such as vegetables, fruits, whole grains, legumes, and nuts), and a decrease in consumption of unhealthy foods (such as red meat, sugar, and refined grains) that would provide major health benefits, and also increase the likelihood of attainment of the Sustainable Development Goals. This is set against the backdrop of defined scientific boundaries that would ensure a safe operating space within six Earth systems, towards sustaining a healthy planet.