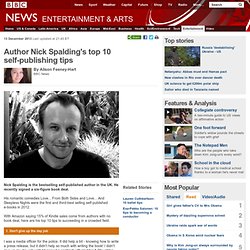 He recently signed a six-figure book deal. His romantic comedies Love... From Both Sides and Love... With Amazon saying 15% of Kindle sales come from authors with no book deal, here are his top 10 tips to succeeding in a crowded field. I was a media officer for the police. It is such an up and down industry - you can be flavour of the month one minute and nothing the next, even when you have had a certain level of success. How to Finish What You Start: A Five-Step Plan for Writers.

How to finish what you start Do you have a bunch of first chapters tucked away in a drawer – for seven different novels? Is there a folder full of abandoned short stories on your computer? Have you left a trail of abandoned blogs around the internet? English Class With Mr. Roth. Photo MALVERN, Pa. — DO you want to know what it was like to have Philip Roth as a professor? 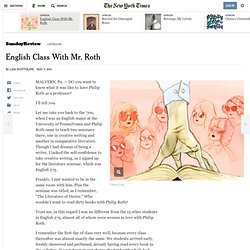 I’ll tell you. Let me take you back to the ’70s, when I was an English major at the University of Pennsylvania and Philip Roth came to teach two seminars there, one in creative writing and another in comparative literature. Though I had dreams of being a writer, I lacked the self-confidence to take creative writing, so I signed up for the literature seminar, which was English 275. Writing Practice - why it's time to stop thinking of writing as a profession. If you go to a good art school (and yes you STEM readers out there, such places do exist) they teach to think of your art as a practice. 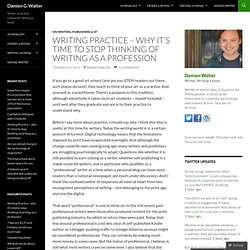 And yourself as a practitioner. There’s a purpose to this tradition, although admittedly it takes most art students – myself included – until well after they graduate and are in to their practice to understand why. Before I say more about practice, I should say why I think this idea is useful at this time for writers. Today the writing world is in a certain amount of turmoil. Digital technology means that the limitations imposed by print have evaporated overnight. That word “professional” is one to think on. And start thinking of it as a practice. What do artists mean by the term “practice”. Practice 1 - When asked about the sticky question of “making it” the comedian Steve Martin says “be so good they can’t ignore you”. 19 Writing Tips From Writers And Editors For The New Yorker.

The No-Fail Secret to Writing a Dissertation. Want to swap writing strategies? 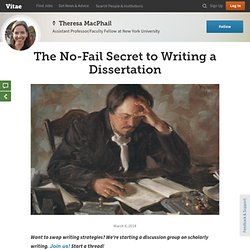 We're starting a discussion group on scholarly writing. Join us! Start a thread! As a former journalist, assistant professor, and seasoned dissertation-writing-workshop coach at New York University, I can promise you there is only one fail-safe method, one secret, one guaranteed trick that you need in order to finish your dissertation: Write. That’s it. Here’s the basic, scalable program that I recommend: Sit your butt down in a chair, preferably in a quiet and distraction-free room. Don’t do “poms”—timed sessions of 25 minutes with five-minute breaks in between—for writing. Here’s the rationale for writing every day: Writing is thinking. In the past year, I’ve coached over 60 Ph.D. candidates from diverse departments—from computer science to French literature, from anthropology to political science. World's Best-Selling Author James Patterson On How To Write An Unputdownable Story. They call it beach reading--the kind of ultra-accessible mass market paperback that nestles inside canvas bags all summer long. 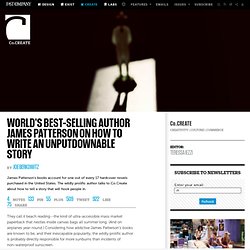 (And on airplanes year-round.) Considering how addictive James Patterson's books are known to be, and their inescapable popularity, the wildly prolific author is probably directly responsible for more sunburns than incidents of non-waterproof sunscreen. Patterson recently earned the distinction of being the best-selling author since 2001. Just to be clear, one of the author's books wasn't merely declared "the #1 bestseller," a blurb that pops up on front covers regularly.

Rather, James Patterson is the top selling author in the world for the last 14 years. The secret to this success isn't Patterson's uncommon productivity (he publishes at least three books a year, and as many as 13) or his range (spanning thrillers, nonfiction, children's books, and beyond). Write Stories The Way People Tell Them I think what hooks people into my stories is the pace. 20 Reasons You Should Write A Book While In Your 20s.

What I've Learned as a Writer. By Leo Babauta I’ve been a professional writer since I was 17: so nearly 24 years now. 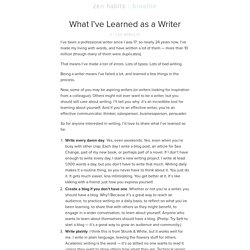 I’ve made my living with words, and have written a lot of them — more than 10 million (though many of them were duplicates). That means I’ve made a ton of errors. Lots of typos. Lots of bad writing. Advice to Writers - Writing Is A Voyage of Discovery. Writing. Style is two things. 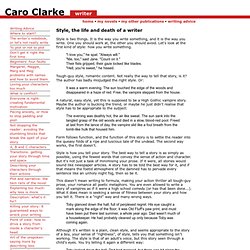 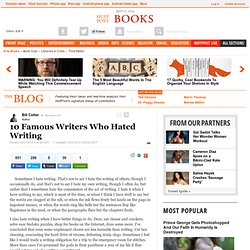 That's not to say I hate the writing of others, though I occasionally do, and that's not to say I hate my own writing, though I often do, but rather that I sometimes hate the commission of the act of writing. I hate it when I have nothing to say, which is most of the time, or when I think I have stuff to say but the words are clogged at the nib, or when the ink flows freely but lands on the page in impotent smears, or when the words ring like bells but the sentences flop like flagstones in the mud, or when the paragraphs flare but the chapters fizzle.

Charles Bukowski on being a writer. Ever wondered why great writers write? 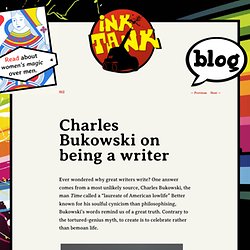 One answer comes from a most unlikely source, Charles Bukowski, the man Time called a “laureate of American lowlife” Better known for his soulful cynicism than philosophising, Bukowski’s words remind us of a great truth. How to write your book's first draft like a professional. [This article was written by guest contributor Gordon Burgett, author of How to Get Your Book Published Free in Minutes and Marketed Worldwide in Days.] 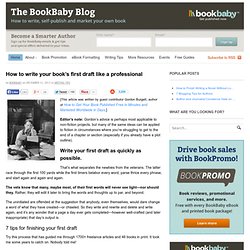 Editor’s note: Gordon’s advice is perhaps most applicable to non-fiction projects, but many of the same ideas can be applied to fiction in circumstances where you’re struggling to get to the end of a chapter or section (especially if you already have a plot outline). Write your first draft as quickly as possible. That’s what separates the newbies from the veterans. The latter race through the first 100 yards while the first timers belabor every word, parse thrice every phrase, and start again and again and again.

The vets know that many, maybe most, of their first words will never see light—nor should they. The uninitiated are offended at the suggestion that anybody, even themselves, would dare change a word of what they have created—or chiseled. Learn from the Greats: 7 Writing Habits of Amazing Writers. What you can learn from great writers By Leo Babauta Finding the ideal working habits that will allow me to write as consistently as possible is always something I’m exploring as a writer. As I’ve said before, I try to make it a habit to write first thing in the morning. Take the Plunge: How to (Finally) Start Your Novel.

Image from sxc.hu by tatlin. You want to write a novel. It’s been your New Year’s resolution more times than you want to admit. And you might well have been day-dreaming about it or scribbling notes about it for months or years. But you’ve never quite started the actual writing. And you’re not sure that you’re ready. 26 Tricks to Keep Readers Reading. Image by Cayusa Unmet desire. That’s how author Steven James defines tension. Unmet desire drives your hero, drives the story, and drives the literary agent and the bookstore browser. The desire to know what happens next, the desire to feel something – this is the D in AIDA that leads to the A. Action. The second A in AIDA. 7 (More!) Tips To Increasing Your Writing Speed. 7 (More!) Tips To Increasing Your Writing Speed 1. Write notes.

Lots of them. Canada Writes - Freeing French: Kevin Felix Polesello, Quebec's language ambassador. From the archive: Doris Lessing's London diary. An American friend is absorbed in that occupation so fascinating to all us foreigners when we first arrive in this island – an empirical study of the class system. Engaged in painting the Universities and Left Review coffee house, he often travels in paintstained clothes, when he is treated with camaraderie by workmen, and as if he does not exist by the well dressed. Back in respectable clothes, he is a sir, another person. Writer's Quote of the Week - Edgar Rice Burroughs #writers #selfpublish. Organize your writing, J.K. Rowling style. The website /Film reported on Friday about author J.K. Rowling’s method for organizing her books.

Using pen, notebook paper, and a simple grid, she plotted out the direction of her stories. Pictured here is the chart for chapters 13-24 of Harry Potter and the Order of the Phoenix: 50 Things a Writer Shouldn't Do. DH: A list recently published in The New York Times by a noted restaurateur gave 100 rules for what service staff should not do. 100 best first lines from novels. Following is a list of the 100 best first lines from novels, as decided by the American Book Review, a nonprofit journal published at the Unit for Contemporary Literature at Illinois State University: 1. How to Write a Book In Your Spare Time. What a Novel Idea: 10 Secrets to Becoming a Great Writer. Monday, 11/25/2013 at 5:45PM.

New Year's Resolution Reading List: 9 Books on Reading and Writing. Creative Writing For Dummies Cheat Sheet. Rewriting and editing helps to tighten up your work. Twain's Rules of Writing. 1. Words of Wisdom: 101 Tips from the World's Most Famous Authors » Online College Search. Writing Tips. Quotations: Writers on Writing. Elmore Leonard's 10 Rules for Writing. Hack your way out of writer's block. How to tell a story. Nerd Paradise : How to Write a 20 Page Research Paper in Under a Day.

How to Be a Writer. 9 (Arbitrary) Ways to Get Your Writing Rejected. 11 Neil Gaiman Quotes on Writing. 30 Indispensable Writing Tips From Famous Authors. People simply empty out. Seven great writing quotes from seven great American writers. Why I Write - Essay by George Orwell. Kurt Vonnegut's 8 Tips on How to Write a Great Story. Ink - Quotes about writing by writers presented by The Fontayne Group. The Ultimate Guide to Writing Better Than You Normally Do.

5 Freewriting Secrets for Being a. 25 Things Writers Should Stop Doing. Fifteen Ways to Write a Novel. Stephen King's Top 20 Rules for Writers « Open Culture. Seven Tips From Ernest Hemingway on How to Write Fiction.

13 Vital Reminders For Writers. 3 Quick Ways To Improve Your Writing.