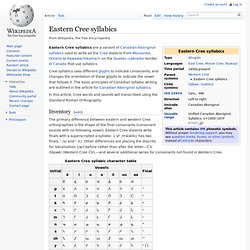 Cree syllabics uses different glyphs to indicate consonants, and changes the orientation of these glyphs to indicate the vowel that follows it. The basic principles of Canadian syllabic writing are outlined in the article for Canadian Aboriginal syllabics. In this article, Cree words and sounds will transcribed using the Standard Roman Orthography. Inventory[edit] The primary difference between eastern and western Cree orthographies is the shape of the final consonants (consonant sounds with no following vowel). 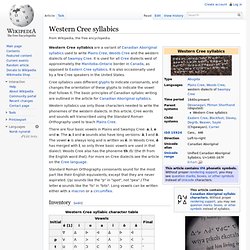 It is used for all Cree dialects west of approximately the Manitoba–Ontario border in Canada, as opposed to Eastern Cree syllabics. It is also occasionally used by a few Cree speakers in the United States. Cree syllabics uses different glyphs to indicate consonants, and changes the orientation of these glyphs to indicate the vowel that follows it. The basic principles of Canadian syllabic writing are outlined in the article for Canadian Aboriginal syllabics. Western syllabics use only those characters needed to write the phonemes of the western dialects.

There are four basic vowels in Plains and Swampy Cree: a, i, e and o. Standard Roman Orthography consonants sound for the most part like their English equivalents, except that they are never aspirated. Inventory[edit] Devanagari. Origins[edit] Devanagari is part of the Brahmic family of scripts of Nepal, India, Tibet, and South-East Asia.[4] It is a descendant of the Gupta script, along with Siddham and Sharada.[4] Eastern variants of Gupta called nāgarī are first attested from the 7th century CE; from c. 1200 CE these gradually replaced Siddham, which survived as a vehicle for Tantric Buddhism in East Asia, and Sharada, which remained in parallel use in Kashmir. 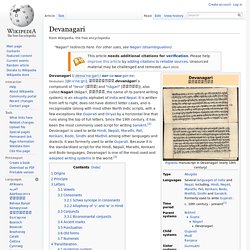 An early version of Devanagari is visible in the Kutila inscription of Bareilly dated to Vikram Samvat 1049 (i.e. 992 CE), which demonstrates the emergence of the horizontal bar to group letters belonging to a word.[1] nāgarī is the Sanskrit feminine of nāgara "relating or belonging to a town or city". It is feminine from its original phrasing with lipi ("script") as nāgarī lipi "script relating to a city", that is, probably from its having originated in some city.[5]

Galifreyan. Forvo: the pronunciation guide. All the words in the world pronounced by native speakers. A Base Vocabulary List for any language. Your Base Vocabulary: The first ~625 words [Author's note: Behold, the new, improved list:] Check these out at the Word Lists page! 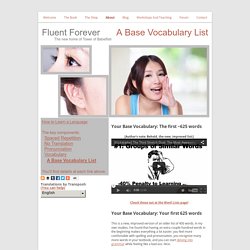 Your Base Vocabulary: Your first 625 words This is a new, improved version of an older list of 400 words. In my own studies, I’ve found that having an extra couple hundred words in the beginning makes everything a lot easier; you feel more comfortable with spelling and pronunciation, you recognize many more words in your textbook, and you can start delving into grammar while feeling like a bad-ass. Nice. I’ve culled this list from the General Service List and Wordfrequency.info - two well-made frequency lists for English. Lang-8. Graduate Programs. Where cultural understanding meets true fluency. 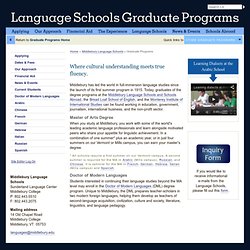 Middlebury has led the world in full-immersion language studies since the launch of its first summer program in 1915. Today, graduates of the degree programs at the Middlebury Language Schools and Schools Abroad, the Bread Loaf School of English, and the Monterey Institute of International Studies can be found working in education, government, journalism, international business, and the non-profit sector.

Master of Arts Degree When you study at Middlebury, you work with some of the world's leading academic language professionals and learn alongside motivated peers who share your appetite for linguistic achievement. I Learned to Speak Four Languages in a Few Years: Here's How. Anki - friendly, intelligent flashcards. IDEA - Dialects & Accents Of The World.

Welcome to Tower of Babelfish - A language learning website. Esperanto video and how useful the language can be: Interview with a Buddhist monk and tour of monastery. Fun video to share with you today… in Esperanto! 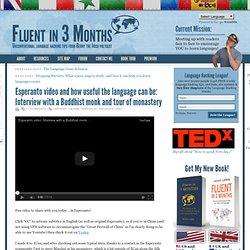 Click “CC” to activate subtitles in English (as well as original Esperanto), or if you’re in China (and not using VPN software to circumnavigate the “Great Firewall of China” as I’m clearly doing to be able to use Youtube) then check it out on Youku. Learn Languages Like an Opera Singer, With Anki (And More) For years, I’ve been tinkering with using Anki to learn languages. 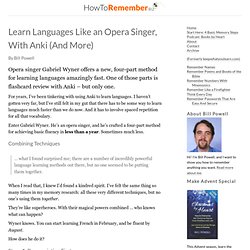 I haven’t gotten very far, but I’ve still felt in my gut that there has to be some way to learn languages much faster than we do now. And it has to involve spaced repetition for all that vocabulary. Enter Gabriel Wyner. He’s an opera singer, and he’s crafted a four-part method for achieving basic fluency in less than a year. Sometimes much less. Combining Techniques … what I found surprised me; there are a number of incredibly powerful language learning methods out there, but no one seemed to be putting them together. When I read that, I knew I’d found a kindred spirit. They’re like superheroes. Wyner knows.

Related:  poetics   -  A Radical View of Chinese Characters   -  lojban   -  Forvo: the pronunciation guide. All the words in the world pronounced by native speakers   -  I Learned to Speak Four Languages in a Few Years: Here's How   -  Anki - friendly, intelligent flashcards   -  Education   -  Enterprise