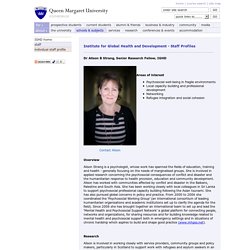 CEEOL - Article Detail. Author(s): Edyta JanuszewskaSubject(s): Social Sciences, Education, SociologyPublished by: Instytut Profilaktyki Społecznej i Resocjalizacji UWKeywords: immigration to France; refugees in France; integration; refugee organizations Summary/Abstract: In the first part of the article the history of the influx of immigrants to France in the 19th and 20th century was described, as well as the characteristics of the number of refugees in the years 1991-2015. 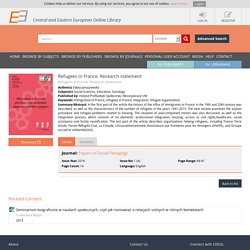 The next section examines the asylum procedure and refugee problems related to housing. Haven or Hell?: Asylum Policies and Refugees in Europe - D. Joly - Google Livres. The Mutually Constitutive Relationship between Place and Identity: The Role of Place-Identity in Discourse on Asylum Seekers and Refugees - Kirkwood - 2013 - Journal of Community & Applied Social Psychology. Recent discursive research has shown that constructions of place may function to regulate social relations and reinforce particular notions of belonging. 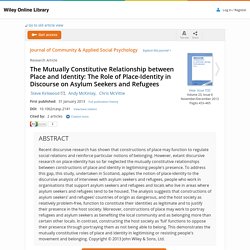 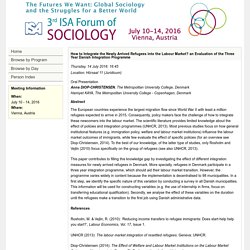 Human Capital, Values, and Attitudes of Persons Seeking Refuge in Austria in 2015. Abstract Since its inception in 2010, the Arab Spring has evolved into a situation of violent conflict in many countries, leading to high levels of migration from the affected region. 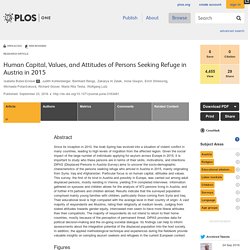 Given the social impact of the large number of individuals applying for asylum across Europe in 2015, it is important to study who these persons are in terms of their skills, motivations, and intentions. DiPAS (Displaced Persons in Austria Survey) aims to uncover the socio-demographic characteristics of the persons seeking refuge who arrived in Austria in 2015, mainly originating from Syria, Iraq and Afghanistan. Particular focus is on human capital, attitudes and values. Global mental health: trauma and adversity among populations in transition. Philosophies of Integration: Immigration and the Idea of Citizenship in ... - Adrian Favell - Google Livres. 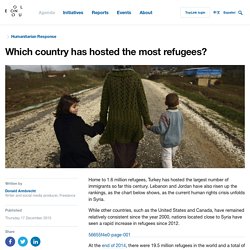 Lebanon and Jordan have also risen up the rankings, as the chart below shows, as the current human rights crisis unfolds in Syria. While other countries, such as the United States and Canada, have remained relatively consistent since the year 2000, nations located close to Syria have seen a rapid increase in refugees since 2012. At the end of 2014, there were 19.5 million refugees in the world and a total of 59.5 million people forcibly displaced as a result of persecution, conflict, generalized violence, or human rights violations.

UNHCR Population Statistics - Data - Overview. Welcome to the UNHCR Population Statistics Database The database currently contains data about UNHCR's populations of concern from the year 1951 up to 2014 and you can use it to investigate different aspects of these populations: their general composition by location of residence or origin, their status (refugees, asylum seekers, internally displaced persons, etc.), their evolution over time, and so on.. 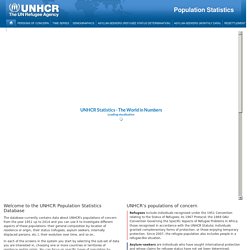 In each of the screens in the system you start by selecting the sub-set of data you are interested in, choosing one or more countries or territories of residence and/or origin. You can focus on specific types of population by checking the boxes for only those you are concerned with, and you can summarise the data by checking the boxes for only those data items by which you wish the data to be broken down. UNHCR - 2015 likely to break records for forced displacement - study. By: Tim Gaynor | 18 December 2015 | Français | عربي Central African Republic refugees at the Timangolo site in Cameroon, including mothers and young children, queue for food. © UNHCR/C. 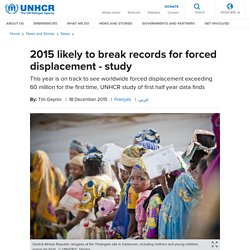 Tijerina GENEVA, Dec 18 (UNHCR) - With almost a million people having crossed the Mediterranean as refugees and migrants so far this year, and conflicts in Syria and elsewhere continuing to generate staggering levels of human suffering, 2015 is likely to exceed all previous records for global forced displacement, the UN Refugee Agency warned in a new report today. Untitled. Édouard Glissant - Île en île. First Things First. The First Things First Manifesto Written in 1963 and published in 1964 by Ken Garland along with 20 other designers, photographers and students, the manifesto was a reaction to the staunch society of 1960s Britain and called for a return to a humanist aspect of design. 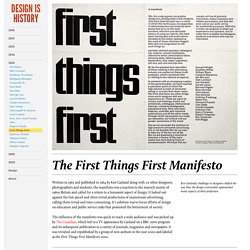 It lashed out against the fast-paced and often trivial productions of mainstream advertising, calling them trivial and time-consuming. It's solution was to focus efforts of design on education and public service tasks that promoted the betterment of society. The influence of the manifesto was quick to reach a wide audience and was picked up by The Guardian, which led to a TV appearance by Garland on a BBC news program and its subsequent publication in a variety of journals, magazines and newspapers. It was revisited and republished by a group of new authors in the year 2000 and labeled as the First Things First Manifesto 2000. Journal of the mental environment. Autriche : information sur le système d'octroi de l'asile; information indiquant si l'asile est accordé de façon temporaire ou permanente; information sur les conditions qui entraînent l'expulsion d'un demandeur d'asile ayant le statut de résid.

Asylum Information Database. General (scope, time limits) The Federal Agency for Immigration and Asylum (BFA) is a specific department of the Ministry of interior, dealing with asylum matters. 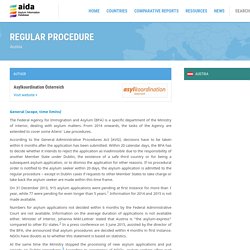 From 2014 onwards, the tasks of the Agency are extended to cover some Aliens’ Law procedures. According to the General Administrative Procedures Act (AVG), decisions have to be taken within 6 months after the application has been submitted. Within 20 calendar days, the BFA has to decide whether it intends to reject the application as inadmissible due to the responsibility of another Member State under Dublin, the existence of a safe third country or for being a subsequent asylum application, or to dismiss the application for other reasons.

If no procedural order is notified to the asylum seeker within 20 days, the asylum application is admitted to the regular procedure – except in Dublin cases if requests to other Member States to take charge or take back the asylum seeker are made within this time frame. Austria > Asylum. Last update: March 2016 If you apply for Asylum in Austria your application will be first checked concerning Dublin III (mostly at the police station). If you pass this step positively, the next step of your application will be dealt with in one of the country's reception centers (german.: “Verteilerquartier”). There, it will be decided in which type of facility you will be housed during the procedure of your application. Transversal 0313: flee erase territorialize. Arrival City: How the Largest Migration in History Is Reshaping Our World: Doug Saunders: 9780375425493: Amazon.com: Books.

MIPEX 2015. Non-EU immigrants in AT have similar needs in terms of labour market integration, education and family reunion as they do in other longstanding countries of immigration in Northwest Europe. Labour market integration improves over time in AT as elsewhere, but the employment gaps are greater for high-educated immigrants, while the school system seems to reproduce inequalities over time. Still, they may have a harder time accessing AT's available policies and programmes. New targeted employment, education, health and anti-discrimination policies may be too new, weak or general to affect integration outcomes across the country. A culture of robust evaluations of policy impact is also missing in AT integration policymaking (see Bilgili 2015), making it difficult to know if these policies will fail or succeed. AT's mostly long-settled non-EU citizens and the growing 2nd generation have greater needs for citizenship and political participation than immigrants in most other countries.

Dominique Schnapper. Intégration (sociologie) Amazon. Leben und Arbeiten in Österreich: Informationen für Asylberechtigte und subsidiär Schutzberechtigte - Arbeitsmarktservice Österreich. Border security – Illegal immigration issues in Europe, U.S. - Washington Post. BM.I - Asylwesen -Statistik. Social Statistics. Social Statistics The SOCIAL STATISTICS area comprises a variety of different statistics on the social situation in Austria. Firstly, the distribution of personal income is presented. Migrant crisis: Migration to Europe explained in seven charts. More than a million migrants and refugees crossed into Europe in 2015, sparking a crisis as countries struggled to cope with the influx, and creating division in the EU over how best to deal with resettling people. The vast majority arrived by sea but some migrants have made their way over land, principally via Turkey and Albania. Winter has not stemmed the flow of people - with 135,711 people reaching Europe by sea since the start of 2016, according to the UNHCR.

Statistiques sur l'asile - Statistics Explained. Asylum statistics - Statistics Explained. Data extracted on 2 March 2016 and on 20 April 2016. Most recent data: Further Eurostat information, Main tables and Database. Planned article update: March 2017. Historical Refugee Data. The Refugee Project. The stunning scope of the world’s refugee crisis, in charts. Ten things you didn’t know about refugees. Brussels – Techfugees. Understanding the Refugee Crisis in Europe, Syria, and around the World. Desperate Journey: Europe's Refugee Crisis. Understanding the syrian crisis in 5 minutes. Here's why the Arab world is in trouble! ISIS, Syria and War. The European Refugee Crisis and Syria Explained. Migrant crisis: Migration to Europe explained in seven charts. WDCD 2013 – The Era of the Designer by What Design Can Do. WDCD 2012 – The Connecting Forces of Design by What Design Can Do.