Book Review: I Am Keith Mann. I Cured Cancer at Home - BSNEWS. Truth. 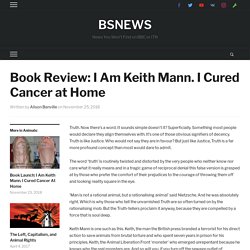 Now there’s a word. It sounds simple doesn’t it? Superficially. Something most people would declare they align themselves with. It’s one of those obvious signifiers of decency. The word ‘truth’ is routinely twisted and distorted by the very people who neither know nor care what it really means and in a tragic game of reciprocal denial this false version is grasped at by those who prefer the comfort of their prejudices to the courage of throwing them off and looking reality square in the eye.

‘Man is not a rational animal, but a rationalising animal’ said Nietzsche. Keith Mann is one such as this. A provocative title you may think? Despite being told he was terminal after his diagnosis of stage 4 non-Hodgkins lymphoma Keith refused his death sentence and began what turned out to be nothing short of an amazing odyssey, one with a triumphant homecoming and a message for everyone about the killer that is stalking one in two of us, according to the ‘successful’ cancer research cartel. Nine ways 5G and the Internet of Things will harm humans, wildlife & Earth. 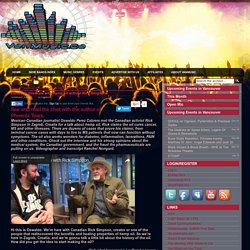 Rick claims the oil cures cancer, MS and other illnesses. There are dozens of cases that prove his claims; from terminal cancer cases with days to live to MS patients that now can function without symptoms. The oil also works wonders for diabetes, inflammation, lacerations, PAIN and other conditions. Check out the interview and his strong opinions about the medical system, the Canadian government, and the fraud the pharmaceuticals are pulling on us. Videographer and transcript Raechel Norrgard. Hi this is Oswaldo. Well, what happened is I suffered a severe head injury in 1997 and it left me with what they call post-concussion syndrome and in my case I had this extremely loud noise ringing in the head 24 hours a day. You were in Nova Scotia? Yeah. You were smoking the marihuana at that time?

Who was the second person that tried this? Yes, grow your own. GcMAF Conference – Immuno Biotech. Cannabis Cures Cancer And The Government Has Known Since 1974. US Government labels cannabis as a Schedule 1 Narcotic, or in other words as narcotic with little to no known medical value. 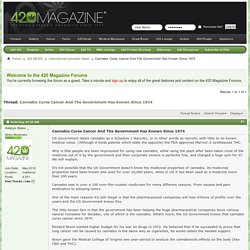 (Although it holds patents which state the opposite) the FDA approved Marinol is synthesized THC.Why is that people are been imprisoned for using raw cannabis, while using the plant after been taken most of the medicine out of it by the government and their corporate owners is perfectly fine, and charged a huge sum for it? We will explain.It’s not possible that the US Government doesn’t know the medicinal properties of cannabis. Its medicinal properties have been known and used for over 10,000 years, while in US it has been used as a medicine more than 100 years.Cannabis was in over a 100 over-the-counter medicines for many different reasons.

Making Cannabis Oil with Rick Simpson. Dear Government Officials, Congressional... - Abraham Hafiz Rodriguez. The Leaves of Soursop Are 1000 Times Stronger at Killing Cancer Cells Than Chemotherapy – My advice for healthy day. Soursop, or Graviola, is a delicious, exotic fruit with a specific taste that is said to be a cross between pineapples and strawberries. 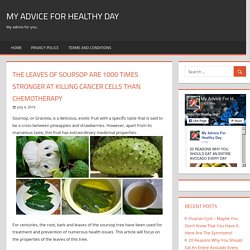 However, apart from its marvelous taste, this fruit has extraordinary medicinal properties. For centuries, the root, bark and leaves of the soursop tree have been used for treatment and prevention of numerous health issues. This article will focus on the properties of the leaves of this tree. Strengthen the Immune System Sometimes, if you frequently suffer from flu, cough, colds, infections and other diseases, it may indicate that you have a weakened immune system. The regular use of tea from the soursop leaves will be a great way to boost it and prevent such issues. Gout Treatment Gout is a condition which is manifested by painful and inflamed joints, especially the joints of the hands and feet. Treat infections of the Urinary Tract Urinary tract infection (UTI) is manifested by a bacterial infection of the kidneys, ureters, urethra, and urinary bladder.