NASA probe OSIRIS-REx leaking asteroid samples after bountiful collection on Bennu - ABC News. A probe NASA sent into space to take a sample of asteroid material has retrieved so much that its container can't close properly, allowing rocks to spill out into the void. 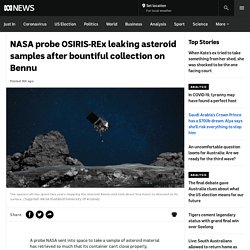 Key points: The asteroid NASA has targeted is one of 500,000 between Earth and MarsIt is one of only 26 that rotates slowly enough for a probe to safely touchdownJapan is the only country to have brought pristine asteroid material back to Earth The robotic arm of the probe, OSIRIS-REx, on Tuesday night kicked up a debris cloud of rocks on Bennu, a skyscraper-sized asteroid some 320 million kilometres from Earth. It then successfully trapped at least 60 grams of the material — a mix of loose, unconsolidated rock, glass and minerals known as regolith — in a collection device for the return to Earth. But images of the spacecraft's collection head beamed back to ground control revealed it had caught more material than scientists anticipated and was spewing an excess of flaky asteroid rocks into space.

ABC/Reuters. Jovian Vortex View. NASA’s Juno spacecraft captured this stunningly detailed look at a cyclonic storm in Jupiter’s atmosphere during its 23rd close flyby of the planet (also referred to as “perijove 23”). 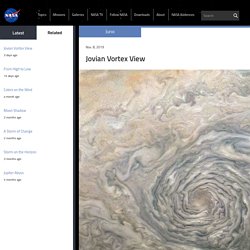 Juno observed this vortex in a region of Jupiter called the “north north north north temperate belt,” or NNNNTB, one of the gas giant planet’s many persistent cloud bands. These bands are formed by the prevailing winds at different latitudes. The vortex seen here is roughly 1,200 miles (2,000 kilometers) wide. Jupiter is composed mostly of hydrogen and helium, but some of the color in its clouds may come from plumes of sulfur and phosphorus-containing gases rising from the planet's warmer interior.

Citizen scientist Kevin M. JunoCam's raw images are available for the public to peruse and process into image products at More information about Juno is at and Image credit: Image data: NASA/JPL-Caltech/SwRI/MSSS Image processing by Kevin M. Hubble Captures a Dozen Galaxy Doppelgangers. This NASA Hubble Space Telescope photo reveals a cosmic kaleidoscope of a remote galaxy, which has been split into multiple images by an effect called gravitational lensing. 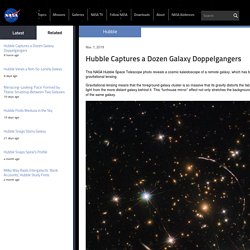 Gravitational lensing means that the foreground galaxy cluster is so massive that its gravity distorts the fabric of space-time, bending and magnifying the light from the more distant galaxy behind it. Four NASA Satellites Set Record for Formation Flying in Space. Four individual satellites of NASA's Magnetospheric Multiscale mission (MMS) recently set a record for the closest flying formation ever achieved by a multi-craft space mission to date. 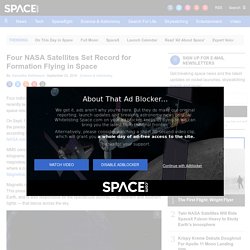 On Sept. 15, the satellite quartet flew only 4.5 miles (7.2 kilometers) apart, breaking the previous record of six miles (9.7 km) set by the MMS satellites in October 2015, according to a statement from NASA. You can see how the MMS satellites fly in this NASA video. MMS consists of four satellites, which weigh approximately 3,000 pounds (1,360 kilograms) each. The satellites fly within Earth's protective magnetic field — the magnetosphere — and represent the first instruments to directly travel through areas where a cosmic phenomenon known as magnetic reconnection occurs. [NASA's Magnetospheric Multiscale Mission in Pictures] Magnetic reconnection occurs when magnetic field lines break apart and reconnect.

Jupiter's 'dramatic atmosphere' creates stunning painting-like effect in new space photo. Posted earlier today at 8:44amSun 3 Mar 2019, 8:44am The image above looks like an example of abstract art, but this is no painting. 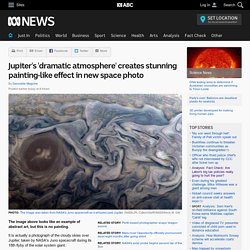 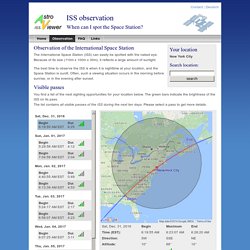 Because of its size (110m x 100m x 30m), it reflects a large amount of sunlight. The best time to observe the ISS is when it is nighttime at your location, and the Space Station is sunlit. Visible passes You find a list of the next sighting opportunities for your location below. Map Data Map data ©2016 Google, INEGI. NASA Video : Earth From Space Real Footage - Video From The International Space Station ISS. 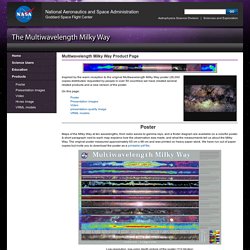 On this page: PosterPresentation imagesVideopresentation-quality imageVRML models Poster Maps of the Milky Way at ten wavelengths, from radio waves to gamma rays, and a finder diagram are available on a colorful poster. A short paragraph next to each map explains how the observation was made, and what the measurments tell us about the Milky Way. Does ‘dark energy’ really exist? Astronaut/Cosmonaut Statistics. Constellations and the Calendar. SWS - Subscribe to SWS - Mailing List. Skip page header Products & Services FORECAST SOL: Normal MAG: Disturbed ION: Moderate HomeProducts and ServicesSubscribe to SWSMailing List Sunday, Oct 23 2016 09:01 UT skip category menu Software Training Consultancy Custom Reports Subscribe to SWS Client Support Section Information Subscribe to SWS Mailing List Listed below are the (email) mailing lists provided by SWS. 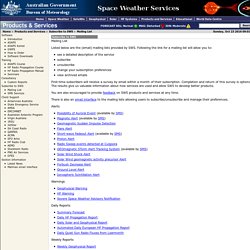 See a detailed description of the service subscribe unsubscribe change your subscription preferences view archived emails First-time subscribers will receive a survey by email within a month of their subscription. You are also encouraged to provide feedback on SWS products and services at any time. There is also an email interface to the mailing lists allowing users to subscribe/unsubscribe and manage their preferences.