How to Maintain Students’ Motivation for Learning as the Year Goes On. It’s likely that your hard work orchestrating the first weeks of school enhanced your students’ connection to the school community and their enthusiasm for the learning to come. 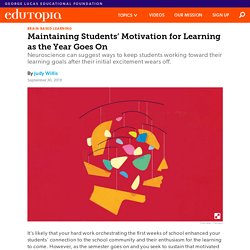 However, as the semester goes on and you seek to sustain that motivated momentum, you may not be able to find the same amount of prep time that you dedicated to the start of the year. Yet even when your students’ bubbles of excitement fade, you can reboot their connections, engagement, and motivation with the help of insights from neuroscience research. The Neuroscience of Motivation Motivation is a desire to learn, try, work, and persevere. I’m a neurologist and former teacher, and one of my focus areas is the neuroscience of learning—especially motivated and successful learning. Intrinsic motivation is promoted by dopamine, a brain chemical that gives us a rush of satisfaction upon achieving a goal we’ve chosen. The Value of Choice Some Classroom Examples Math: Metric system boring? Signs of Dyslexia - Yale Dyslexia. The signs of dyslexia can appear as early as preschool. 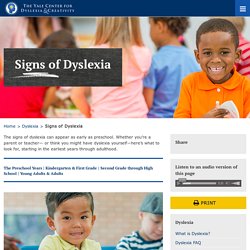 Whether you’re a parent or teacher— or think you might have dyslexia yourself—here’s what to look for, starting in the earliest years through adulthood. The Preschool Years | Kindergarten & First Grade | Second Grade through High School | Young Adults & Adults The Preschool Years Trouble learning common nursery rhymes, such as “Jack and Jill”Difficulty learning (and remembering) the names of letters in the alphabetSeems unable to recognize letters in his/her own nameMispronounces familiar words; persistent “baby talk”Doesn’t recognize rhyming patterns like cat, bat, ratA family history of reading and/or spelling difficulties (dyslexia often runs in families) © Sally Shaywitz, Overcoming Dyslexia, p. 122 Kindergarten & First Grade Difficulties Strengths. Teaching Black History in Culturally Responsive Ways. As Black History Month kicked off, I was reflecting on my time as a student. 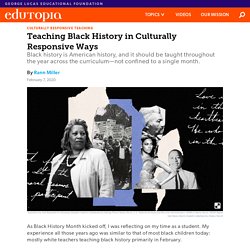 My experience all those years ago was similar to that of most black children today: mostly white teachers teaching black history primarily in February. I was told of Martin Luther King Jr., Harriet Tubman, and Frederick Douglass. I heard very little of Malcolm X, the FBI’s campaign against civil rights leaders, the Rainbow Coalition put together by the Black Panther Party’s Fred Hampton, or Hampton’s assassination. I learned about the struggles of my enslaved ancestors, but not about Gabriel Prosser, Denmark Vesey, or Nat Turner. I was taught about the marches and firehoses in Alabama, but I had to teach myself about the acts of terrorism committed against black people in Rosewood, Florida; Tulsa, Oklahoma; and Wilmington, North Carolina.

No matter what subject you teach, there are ways you can infuse black history into your daily lessons in a way that is prophetic and purposeful. Black History Is American History. 9 New Ways to Use Flipgrid in the Classroom. The video-sharing tool Flipgrid, as we all know, is popular in schools—so popular, in so many countries, that its rapid rise been attributed to “Flipgrid Fever.” 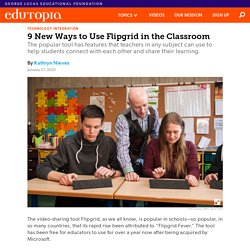 The tool has been free for educators to use for over a year now after being acquired by Microsoft. One of the main things going for Flipgrid is its ease of use. Teachers set up an account and create grids, which act as communities for students to work in. Within each grid the teacher creates prompts called topics, and students post video responses to the prompts and replies to each other’s videos. Most of the videos are quite short, just a minute or two long, and the tool is simple enough that kindergartners use it. 9 New Ways to Use Flipgrid 1. 2. 3. 4. 5. 6. 7. 8. 9. Why school librarians matter: What years of research tell us - kappanonline.org.

When schools have high-quality library programs and librarians who share their expertise with the entire school community, student achievement gets a boost. 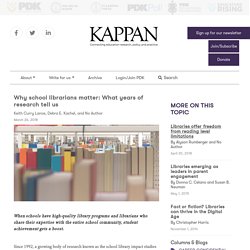 Since 1992, a growing body of research known as the school library impact studies has consistently shown positive correlations between high-quality library programs and student achievement (Gretes, 2013; Scholastic, 2016). Data from more than 34 statewide studies suggest that students tend to earn better standardized test scores in schools that have strong library programs.