Etcanada. Celebrity news and pics for Jan. 31, 2017. Inside the Kardashians' $16,500-a-night Costa Rican villa The Kardashian-Jenner krewe arrived back home in Los Angeles on Monday, Jan. 30, after a few days of R&R -- and "Keeping Up With the Kardashians" filming -- in Costa Rica. 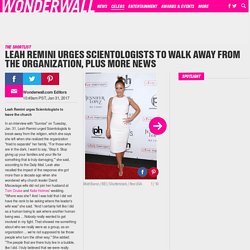 Us Weekly reports Kris Jenner, Corey Gamble, Kim Kardashian, plus North and Saint West, Kourtney Kardashian, Scott Disick and their kids, Khloe Kardashian and Kylie Jenner along with Tyga and his son spent the weekend at a 30,000-square-foot private sanctuary called Villa Manzu. Taking advantage of the five acre-wide property and easy beach access, they swam, took golf cart rides and a private helicopter tour, hiked through the jungle and indulged in spa treatments, all with the assistance of a full-time wait staff including bartenders, a maid and butler and private drivers to get them wherever they wanted to go. Inside, the family spread out across eight bedroom suites and a kids' bunk room with Indonesian carved beds at night. What's Next for Leah Remini and the Church of Scientology Following A&E's Shocking Docu-Series.

The war between Leah Remini and the Church of Scientology appears to be far from over. 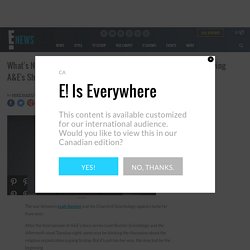 Jason Beghe’s Life After Scientology: ‘I Was in a Cult’ The ‘Chicago P.D.’ star opens up about smoking pot with John F. 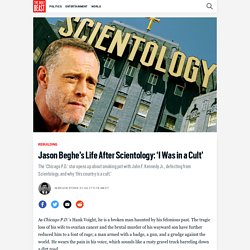 Kennedy Jr., defecting from Scientology, and why ‘this country is a cult.’ As Chicago P.D.’s Hank Voight, he is a broken man haunted by his felonious past. Leah Remini: Scientology and the Aftermath Full Episodes, Video & More. My TV provider is not listed. 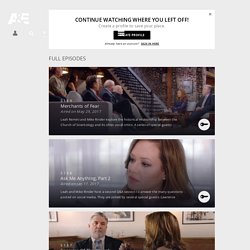 Why not? We are currently working on adding more TV providers. Please check back frequently to see if your TV provider has been added. Why do I need to log in to watch some video content? Viewers who verify their subscription to a TV provider get access to a deeper catalog of video content, including more full episodes. I am able to watch on TV. This service is only available through participating TV providers. Russian security service conducts raids on Church of Scientology. Russia’s security service has raided over a dozen locations linked to the Church of Scientology in the latest step of a long-running battle between authorities and the US-based organisation. 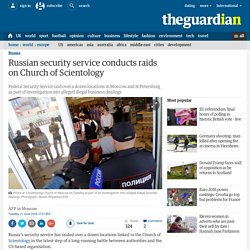 The Federal Security Service (FSB) said officers “conducted simultaneous searches” at 14 addresses in Moscow and St Petersburg as part of an apparent investigation into alleged illegal business dealings by the Church of Scientology in Russia’s second city. Scientology Leader's Estranged Father Preps Tell-All Book. Ronald Miscavige Sr., the estranged father of Scientology leader David Miscavige, promises a "riveting insider's look" at the controversial church with a new tell-all book titled Ruthless: Scientology, My Son David Miscavige, and Me, out May 3rd via St. 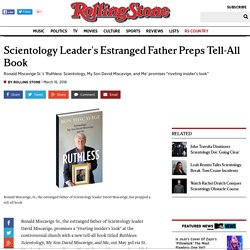 Martin's Press. According to The Hollywood Reporter, the publisher describes the title as "the only book to examine the origins of Scientology's current leader. " St. Tom Cruise’s ex Katie Holmes just railed against Scientology in the best way possible. Katie Holmes spent seven years trapped in a marriage with Tom Cruise who has reached master levels in the Church of Scientology. 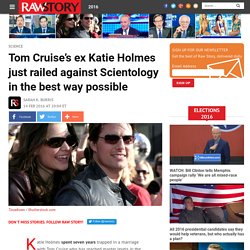 The Los Angeles-based “religion” is known for recruiting new members of their flock from Hollywood. Most recently Leah Remini came out about her experience as a part of Scientology and her attempts to escape. Holmes made news when she publicly apologized to Remini and Tom Cruise allegedly “freaked out.” Well, things are about to get a heck of a lot worse for Scientology at the hand of Holmes, or perhaps the middle-finger of Holmes.

Her latest indie film “Touched With Fire,” is one big endorsement of psychology, which Scientology is known for opposing. In an interview last week on the “Today Show,” Matt Lauer asked Holmes if the film was pro-medication since the film seems to show two people who function better when on their meds. L. The Top 25 People Crippling Scientology, No. 1: L. Ron Hubbard. On August 5, we started a countdown that will give credit -- or blame -- to the people who have contributed most to the sad current state of Scientology. 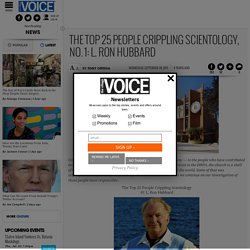 From its greatest expansion in the 1980s, the church is a shell of what it once was and is mired in countless controversies around the world. Some of that was self-inflicted, and some of it has come from outside. Join us now as we continue on our investigation of those people most responsible... L. Ron Hubbard's great-grandson spills the family secrets on how Scientology started. Eek. Scientologists Should be The First "Church" to Lose Tax Exemption; Set New Standards. Tom Cruise's Former Spiritual Mentor Continues to Piss Off Scientologists. The importance of the Xenu story, is it simply gives the background for why today Scientologists have to do so much exorcism (OT levels 3, 4, 5, 6 and 7 are the exorcism "upper levels" of Scientology). 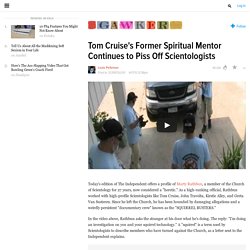 Xenu was simply the bad guy space leader who mass murdered a huge number of earthlings and humanoids brought here to earth, so many were all mass murdered during the Wall of Fire incident, that the souls formed a massive surplus of souls without human bodies to occupy. The result has been that the surplus of these mass murdered earthlings and alien humanoids have overpopulated earth, and the surplus souls cluster in clusters and attach themselves to humans, all during human evolution, causing humankind all sorts of mental problems. 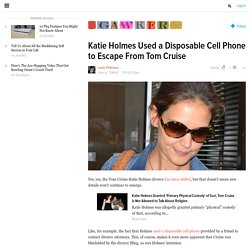 She must have done not only her homework on what happened to Nicole Kidman, but on the cult's history of abusing the legal system to harass and bully. She knew she had to hit and hit hard and fast and when they were off guard. I'm impressed! Not what I expected from a girl who at first seemed to go along with Tom cramming Scientology down her throat and allowing cult handlers to be with her 24/7 for months. Apparently Katie also had Tom's daughter working at her "fashion label" company and fired her a few months back. Tom's kids have very little contact with their mother since she left the cult, they were told she is an "SP" (SP means a suppressive person, which is an evil person in the cult and basically anyone who doesn't agree with Scientology 100% or who leaves the cult get declared an SP).

I'm so happy things turned out this way for Katie. Tampabay: Scientologists settle death suit. Terms of the unexpected settlement are confidential in the wrongful death suit brought by the estate of Lisa McPherson. By ROBERT FARLEY Published May 29, 2004. Riddle of John Travolta's son - could he have been saved? The death of John Travolta’s son was shrouded in controversy last night amid claims that 16-year-old Jett suffered from a condition he was never treated for.

The youngster, who died after the star fought a desperate battle to save him with mouth-to-mouth and heart massage, had long been the subject of claims that he had autism – a condition which is not recognised by the Scientology religion pursued by Hollywood star John and his actress wife Kelly Preston. Last night pathologists were preparing to carry out a post-mortem to determine the exact cause of Jett’s death after he suffered a seizure and fell on to a bath at the family’s holiday home in the Bahamas.

All night long they kept coming, pouring in through the great old iron gates of St. Mark’s Church on Second Avenue. Inside, under the vaulted ceiling, people were sweating and swaying to excellently named bands—the Young Lords, the Virgins—the music so loud you could feel it, like a fist, thumping in the middle of your chest. Outside in the garden they huddled around the grill or lined up at the bar for four-dollar cans of Bud Light, everyone drinking a bit more than usual, perhaps, because it was July 3, 2007, and all anyone had to do tomorrow was sleep until the headache subsided and get out of bed in time for the fireworks. St. Mark’s was where Andy Warhol screened his early films, where W. Businessinsider. The 6 Most Disturbing Moments from HBO’s Scientology Documentary Going Clear. It’s possible that HBO’s Scientology documentary, Going Clear: Scientology and the Prison of Belief, didn’t show you anything you didn’t already know.

Based on the high-profile book of a similar name and covering a lot of material that has already been widely reported (including some information from the pages of Vanity Fair), the film wasn’t exactly breaking new ground. 5 big revelations in HBO’s new Scientology documentary ‘Going Clear’ Scientologists Ambush Former Member Outside Hollywood Studio. A week after an ex-Scientologist videotaped a confrontation with current members outside the church’s International Base near San Jacinto, California, another former member filmed a similar incident on Saturday. Marty Rathbun -- who was ambushed by several church members at Los Angeles International Airport in October -- published a YouTube video on Sunday showing two unidentified men arguing with him outside a Hollywood studio.

Scientology clergy force a mother to choose: son or daughter (w/video) The Church of Scientology pressured Sara Goldberg for months to kick her son out of her life. She wouldn't do it. So the church put her on trial one night in a Scientology building in Clearwater.