Twitter Search, Monitoring, & Analytics. With iOS 9, Search lets you look for content from the web, your contacts, apps, nearby places, and more. 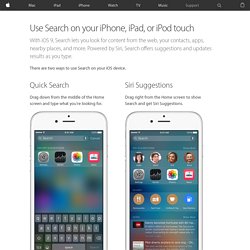 Change search settings Go to Settings > General > Spotlight Search. From here, you can turn Siri Suggestions on or off and choose which apps to include in your searches. Services. The Source for Social Data - Gnip. Power Decisions With Social Data. Firehose. Firehose. User streams. Overview User Streams provide a stream of data and events specific to the authenticated user. 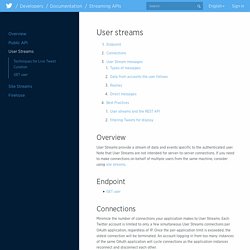 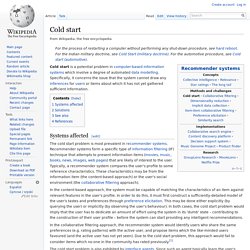 Recommender systems form a specific type of information filtering (IF) technique that attempts to present information items (movies, music, books, news, images, web pages) that are likely of interest to the user. Typically, a recommender system compares the user's profile to some reference characteristics. These characteristics may be from the information item (the content-based approach) or the user's social environment (the collaborative filtering approach).

In the content-based approach, the system must be capable of matching the characteristics of an item against relevant features in the user's profile. In the collaborative filtering approach, the recommender system would identify users who share the same preferences (e.g. rating patterns) with the active user, and propose items which the like-minded users favoured (and the active user has not yet seen). K-nearest neighbors algorithm. In pattern recognition, the k-Nearest Neighbors algorithm (or k-NN for short) is a non-parametric method used for classification and regression.[1] In both cases, the input consists of the k closest training examples in the feature space. 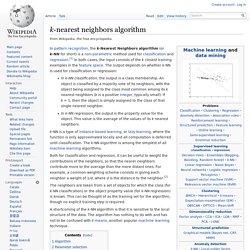 The output depends on whether k-NN is used for classification or regression: In k-NN classification, the output is a class membership. An object is classified by a majority vote of its neighbors, with the object being assigned to the class most common among its k nearest neighbors (k is a positive integer, typically small). If k = 1, then the object is simply assigned to the class of that single nearest neighbor. Spearman's rank correlation coefficient. A Spearman correlation of 1 results when the two variables being compared are monotonically related, even if their relationship is not linear. 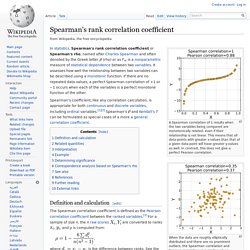 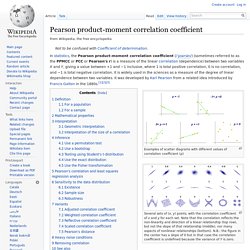 It is widely used in the sciences as a measure of the degree of linear dependence between two variables. It was developed by Karl Pearson from a related idea introduced by Francis Galton in the 1880s.[1][2][3] Examples of scatter diagrams with different values of correlation coefficient (ρ) Several sets of (x, y) points, with the correlation coefficient of x and y for each set. Note that the correlation reflects the non-linearity and direction of a linear relationship (top row), but not the slope of that relationship (middle), nor many aspects of nonlinear relationships (bottom). Nearest neighbor search. Nearest neighbor search (NNS), also known as proximity search, similarity search or closest point search, is an optimization problem for finding closest (or most similar) points. 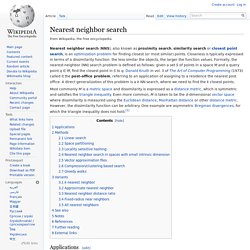 Closeness is typically expressed in terms of a dissimilarity function: the less similar the objects, the larger the function values. Formally, the nearest-neighbor (NN) search problem is defined as follows: given a set S of points in a space M and a query point q ∈ M, find the closest point in S to q. Donald Knuth in vol. 3 of The Art of Computer Programming (1973) called it the post-office problem, referring to an application of assigning to a residence the nearest post office. A direct generalization of this problem is a k-NN search, where we need to find the k closest points. Sørensen–Dice coefficient. Name[edit] The index is known by several other names, usually Sørensen index or Dice's coefficient. 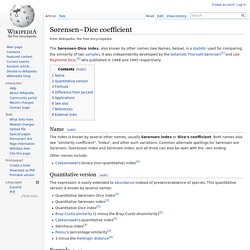 Both names also see "similarity coefficient", "index", and other such variations. Common alternate spellings for Sørensen are Sorenson, Soerenson index and Sörenson index, and all three can also be seen with the –sen ending. Fox Sports becomes lastest to monetize Facebook videos. For months, Facebook has been pitching publishers on the wonders of posting their media — especially their videos — directly to Facebook in exchange for a split on ad revenue. 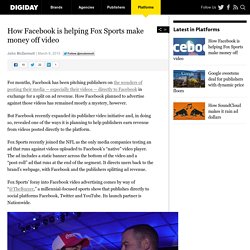 How Facebook planned to advertise against those videos has remained mostly a mystery, however. But Facebook recently expanded its publisher video initiative and, in doing so, revealed one of the ways it is planning to help publishers earn revenue from videos posted directly to the platform. Fox Sports recently joined the NFL as the only media companies testing an ad that runs against videos uploaded to Facebook’s “native” video player. Firefox - Isolez vos onglets dans une Sandbox pour plus de sécurité. 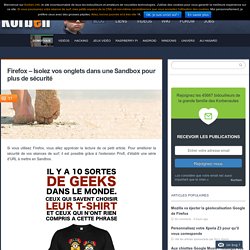 Web Data Platform & Free Web Scraping Tool. La BBC teste la nouvelle télévision sur Internet. Keyword Insights API. Select the right keywords for the topic that you're tracking Since there may be multiple variations on the way that a user can talk about a specific topic, it's important to comprise a list of relevant keywords that a person might include in a post about the topic that you are tracking. For example, if you're tracking mentions of Washington Redskins quarterback Robert Griffin III, you might want to request mention counts for "RGIII", "RG3", and "Robert Griffin III". Define your timeframe By default, the Keyword Insights API will return the numbers of times that the specified term has been mentioned in the past hour. Be sure to properly define the start and end time of the range that you want to analyze to ensure you're capturing the conversation over the correct timeframe.

API Directory. Music APIs and Mashups. MusicGraph API. Data APIs. Priceonomics Launches a Platform to Crawl and Analyze Web Data. Priceonomics has launched a new offering that enables developers to crawl and analyze web pages on a large scale. The foundation of the Priceonomics Analysis Engine is a service called Fetch. In a blog post, the company explained: ​Google Closes Freebase, Launches Knowlege Graph API. Google is shuttering Freebase, a community-curated database of well-known people, places, and things, and providing a tool that will enable its data to be imported into the Wikidata project. Originally started by a company called Metaweb, Google became Freebase’s owner when the search giant acquired Metaweb in 2010. In a Google+ post yesterday, the Freebase team explained its decision to hand Freebase data over to Wikidata: “When we publicly launched Freebase back in 2007, we thought of it as a ‘Wikipedia for structured data.’

So it shouldn’t be surprising that we’ve been closely watching the Wikimedia Foundation’s project Wikidata since it launched about two years ago. Deconstructed User API. Rule API — Deconstructed. DiscoAPI API. DiscoAPI. Pricing. We aim to have predictable pricing - Gnip. Musicgraph.com. MusicGraph combines song information with personal data to create engaging and personalized playlists for every user. Generates a playlist based on a seed artist and returns musical plus social evidence for playlist track choices. See the Demo From lyric and song attributes to social urls, MusicGraph lets you leverage the most complete information about music. DiscoAPI. Our robust suite of products ensure that you receive every social activity you need. - Gnip. API Directory.

A modern web application shares nearly all the benefits of a desktop application and can be accessible anywhere, any time, using a broad range of devices.Traditional web technologies have significantly improved and rich client applications have become a mainstream in our industry. Www.luxoft.com. Team - Company - Sibers.com. HireRussians - Offshore web and desktop software development IT company. Dossier : l'offshore informatique menace ou opportunité ?