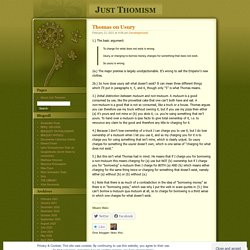 The basic argument: To charge for what does not exist is wrongUsury, or charging to borrow money, charges for something that does not exist. So usury is wrong. 2a.) 2b.) 3.) 4.) 5.) 6.) Scholasticism. Bartholomew's World - Natural Science. Tinkering with a theory of penance and mortification. All blogposts are in the workshop, but this one is more so than others. 1.) 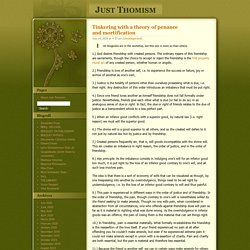 God desires friendship with created persons. The ordinary means of this friendship are sacraments, though the choice to accept or reject the friendship is the first properly moral act of any created person, whether human or angelic. The limit of self-existence. If we know what things are by what they do then the more they act independently of others the more they will exist independently of others. 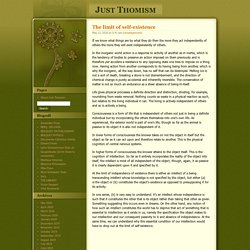 In the inorganic world action is a response to activity of another as in inertia, which is the tendency of bodies to preserve an action imposed on them previously and is therefore per accidens a resistance to any opposing state one tries to impose on a thing now. Having action from another corresponds to its having being from another, which is why the inorganic, all the way down, has no self that can be destroyed. Melting ice is not a sort of death, breaking a stone is not dismemberment, and the direction of chemical change is purely accidental and inherently reversible. The conservation of matter is not so much an endurance as a sheer absence of being-in-itself.

Life gives physical processes a definite direction and distinction, dividing, for example, nourishing from waste removal. Transcendental and Predicamental Relation (and, More Generally, relatio secundum esse) — Philosophical Catholic. I thought it would be good to reproduce here a topic from Woodbury that is very pertinent to discussions John Deely has undertaken in recent history. 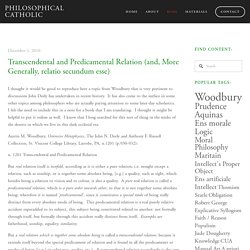 It has also come to the surface in some other topics among philosophers who are actually paying attention to some later-day scholastics. I felt the need to include this in a note for a book that I am translating. I thought it might be helpful to put it online as well. Want (1), Want (2), and the transcendental good. November 17, 2014 at 1:33 pm (Uncategorized) Charles Young once served as a dissertation advisor to someone who researched how many persons are killed each year by rocking vending machines in an effort to get them to dispense free product. 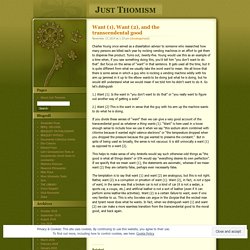 Animals Inertia and the Concept of Force - Collins. Infinite regress. January 31, 2018 at 3:49 pm (Uncategorized) The Hellenic-Medieval rejection of infinite regress is axiomatic when we get a clear view of what is being rejected. 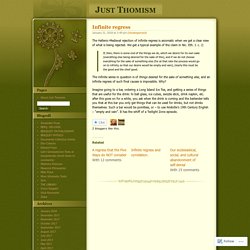 We get a typical example of the claim in Nic. Eth. I. c. 2: Philosophy of Nature Let Thomas Aquinas Teach It - Kenny, Joseph, O.P. 5145. Cartesian epistemologies and Dominican alternatives. 0.) 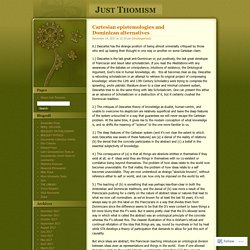 Descartes has the strange position of being almost universally critiqued by those who end up basing their thought in one way or another on some Cartesian claim. 1.) Descartes is the last great anti-Dominican or, put positively, the last great developer of Franciscan and Jesuit later scholasticism. If you read the Meditations with any awareness of the debates on omnipotence, intuitions of existence, the Ontological Argument, God’s role in human knowledge, etc. this all becomes clear as day.

Descartes is rebooting scholasticism in an attempt to retrieve its original project of compressing knowledge: where the 12th and 13th Century Scholastics were trying to compress the sprawling, prolix patristic literature down to a clear and minimal coherent system, Descartes tries to do the same thing with late Scholasticism. 2.) 3.) 4.) 5.) The Thomistic Account of Rationality (Re-Post) This is a slightly revised re-posting of a post from 2013. 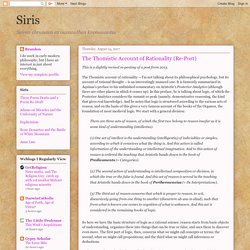 The Thomistic account of rationality -- I'm not talking about its philosophical psychology, but its account of rational thought -- is an interestingly nuanced one. It is famously summarized in Aquinas's preface to his unfinished commentary on Aristotle's Posterior Analytics (although there are other places in which it comes up). In this preface, he is talking about logic, of which the Posterior Analytics considers the summit or peak (namely, demonstrative reasoning, the kind that gives real knowledge).

And he notes that logic is structured according to the various acts of reason, and on the basis of this gives a very famous account of the books of the Organon, the foundation of most medieval logic. We start with a general division: An account of why being is not a genus. July 28, 2017 at 12:36 pm (Uncategorized) 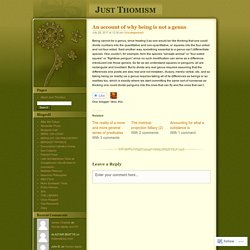 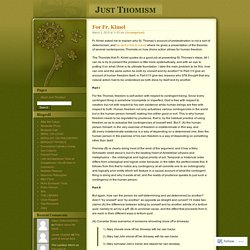 Kimel asked me to explain why St. Thomas’s account of predestination is not a sort of determinism, and he sent a link to a post where he gives a presentation of the theories of several contemporary Thomists on how divine action allows for human freedom. The Thomists that Fr. Kimel quotes do a good job at presenting St. Thomas’s ideas. Treating moved movers as if closed off. March 3, 2017 at 1:28 pm (Uncategorized) Here’s a prediction of the Five Ways: given nature is ultimately in the instrumental order and all instruments lack the form by which they act, viewing nature as a closed system leads to a cluster of related beliefs: 1.)

John Henry Newman-John Duns Scotus Reader is Out! OXFORD MOVEMENTS – DUNS SCOTUS LIVES AND IS STILL DOCTOR SUBTILIS. For the home of lost causes, Oxford has a pretty impressive record of “live” ones. Its name has been associated with ultra-Royalism in the 17th Century, High Church revival in the 19th, the moral-rearmament movement and the campaign against world poverty in the 20th and the dominant contemporary British school of philosophy.

There is a certain similarity between these movements – and it has nothing to do with the proximity of dreaming spires or the damp atmosphere. Somehow a particular outlook seems to have become established here and we’ve never quite been able to escape from it since it hit us in the 13th Century. It does not follow that this can be demonstrated . . . but we hold it by faith.William of Occam, Oxford Franciscan School, 1312-1318. WHAT’S WRONG WITH OCKHAM? Reassessing the Role of Nominalism in the Dissolution of the West - New Scotus Edition. Was Garrigou-Lagrange a ‘Personalist’? .Cornelio Fabro. THE RISE & FALL OF THE THOMISTIC RENEWAL — PART I. Last Franciscan. Usury. Aristotelian Thomism.