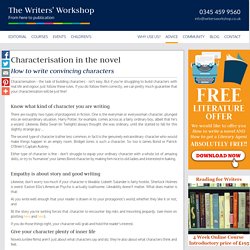 But if you're struggling to build characters with real life and vigour, just follow these rules. If you do follow them correctly, we can pretty much guarantee that your characterisation will be just fine! Know what kind of character you are writing There are roughly two types of protagonist in fiction. The second type of character (rather less common, in fact) is the genuinely extraordinary character who would make things happen in an empty room. Either type of character is fine - don't struggle to equip your ordinary character with a whole lot of amazing skills, or try to 'humanise' your James Bond character by making him nice to old ladies and interested in baking. Empathy is about story and good writing. 6 Ways to Make Sure Your Reader’s Brain Syncs with Your Protagonist’s Brain. Photo by Andres Musta via Flickr Because here’s the thing: it’s not fiction. 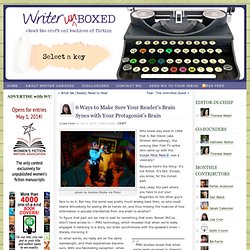 It’s fact. Except, you know, for the Vulcan part. And, okay, the part where you have to put your fingertips on the other guy’s face to do it. But hey, the world was pretty much analog back then, so who could blame Wincelberg for seeing life as hands-on, and thus missing the nuances of how information is actually transferred from one brain to another?

Main/Genre Tropes. Character Flaw Index. To make characters realistic and relatable they are given flaws, because if there is anything a writer can be sure of it is that no one in their audience will be perfect. 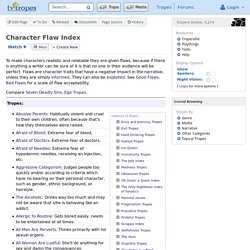 Flaws are character traits that have a negative impact in the narrative, unless they are simply informed. They can also be exploited. See Good Flaws, Bad Flaws for a scale of flaw acceptability. Compare Seven Deadly Sins, Ego Tropes. Character Archetypes. Resources for Developing Characters. When developing characters, many writers use personality traits that they see in themselves and in others, such as friends, family and celebrities. 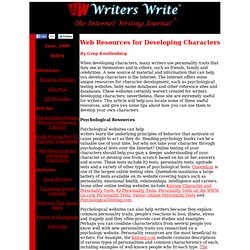 A new source of material and information that can help you develop characters is the Internet. The Internet offers some unique resources for character development, such as psychological testing websites, baby name databases and other reference sites and databases. These websites certainly weren't created for writers developing characters; nevertheless, these site are extremely useful for writers. This article will help you locate some of these useful resources, and give you some tips about how you can use them to develop your own characters. Psychological Resources Psychological websites can help writers learn the underlying principles of behavior that motivate or cause people to act as they do. Biography Resources. Pressing & Brewing Cider - Apple Cider Homebrew. Easiest Homemade Wine Ever! Most wine making guides really over-think the wine making process. 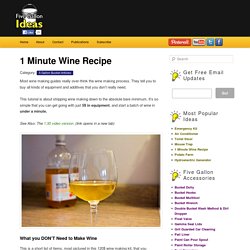 They tell you to buy all kinds of equipment and additives that you don’t really need. This tutorial is about stripping wine making down to the absolute bare minimum. It’s so simple that you can get going with just 5$ in equipment, and start a batch of wine in under a minute. See Also: The 1:30 video version. Making Fused Plastic. March 12th, 2013 I’ve been wanting to experiment with fused plastic for ages so what better place to try it out than here on Tutorial Tuesday and share my experiences with you. 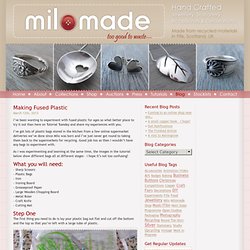 I’ve got lots of plastic bags stored in the kitchen from a few online supermarket deliveries we’ve done since Milo was born and I’ve just never got round to taking them back to the supermarkets for recycling. How To Make A Bow Out Of Recycled Magazines. Guest post by Jennifer Young of I Art U blog. 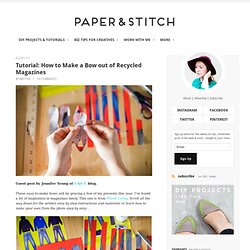 These easy-to-make bows will be gracing a few of my presents this year. I’ve found a lot of inspiration in magazines lately. This one is from Whole Living. Scroll all the way down for the written step by step instructions and materials or learn how to make your own from the photo step by step… Making a Bow (found in Whole Living) Woodworking Projects, Plans, Techniques, Tools, Supplies.

Scrap To Swank: Turn Pallets Into A Beautiful Desk. Recycling pallets into something else useful is nothing new, but this desk, inspired by bowling lanes and butcher blocks, is, well, inspired. 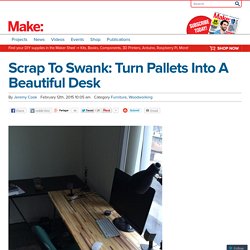 The top is made entirely out of recycled pallets found around a college campus. As this desk is for college, the creator estimates he will move “23 more times before I’m done,” so the legs were bought from IKEA in order to be “easy and non-destructive.” Like many projects here, this desk is a testament to the cool things that can be done with the proper woodworking knowledge and equipment. The boards were first separated from the pallet by cutting pieces between the support members. This was easier than prying out all of the nails, and helped keep the wood intact. Scrap To Swank: Turn Pallets Into A Beautiful Desk. Books and DVDs for blacksmiths, knife makers, bladesmiths, gunsmiths, metalsmiths and jewelers. 101 Things to Do with a Mason Jar. Crafts for Men.