Marriott And MIT Reinvent The Hotel Lobby As A Social Hub. Business trips can be such lonely adventures. 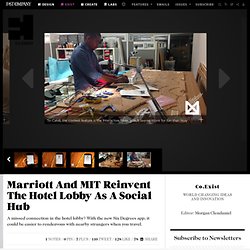 Away from family and friends, after the meetings die down, what’s left is often a solo jog, drink, or meal. As it plans the future of its premium hotels to connect with a more mobile, younger workforce, Marriott has enlisted the help of MIT researchers and students to rethink what’s usually a hotel’s most memorable feature: its lobby. The result of the work, inspired by a the Spring 2013 undergraduate class and completed by MIT’s Mobile Experience Lab, is a social app called Six Degrees, and a series of physical lobby features that go with it, including a large interactive digital screen and a LED table that interacts with the people sitting down at it. 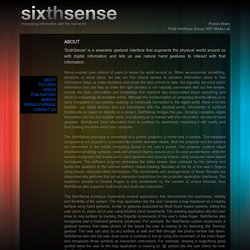 We've evolved over millions of years to sense the world around us. When we encounter something, someone or some place, we use our five natural senses to perceive information about it; that information helps us make decisions and chose the right actions to take. But arguably the most useful information that can help us make the right decision is not naturally perceivable with our five senses, namely the data, information and knowledge that mankind has accumulated about everything and which is increasingly all available online. Although the miniaturization of computing devices allows us to carry computers in our pockets, keeping us continually connected to the digital world, there is no link between our digital devices and our interactions with the physical world. . . . some more pictures are coming soon.

This Is What A Holographic iPhone Might Look Like. Now, whether or not Apple will actually make such a device, no one knows. 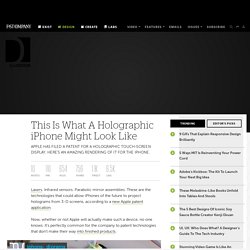 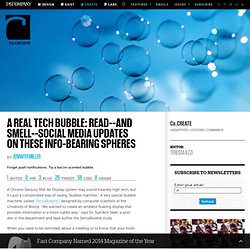 " A very special bubble machine, called "SensaBubble," designed by computer scientists at the University of Bristol. "We wanted to create an ambient floating display that provides information in a more subtle way," says Dr. Sue Ann Seah, a post doc in the department and lead author the SensaBubble study. Meet Paddle, The Incredible Shapeshifting Smartphone Of The Future. How many gadgets do you tote around at any given time? 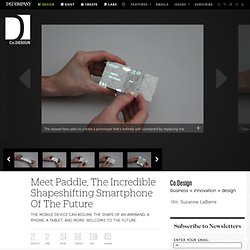 Your smartphone, of course. But also maybe a tablet or an e-reader or a fitness band or a second smartphone. (Or perhaps all of the above.) Why Wearable Devices Will Never Be As Disruptive As Smartphones. Wearables moved from the buzz idea of 2013 into a tangle of clips, bands, badges, brooches, glasses, earpieces and headsets. 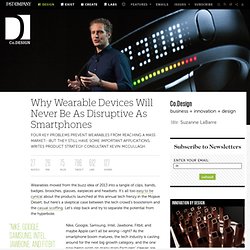 It’s all too easy to be cynical about the products launched at this annual tech frenzy in the Mojave Desert, but here’s a skeptical case between the tech crowd’s boosterism and the casual scoffing. Let’s step back and try to separate the potential from the hyperbole. Nike, Google, Samsung, Intel, Jawbone, Fitbit, and maybe Apple can’t all be wrong--right? C2C - Arcades Live. A Surgeon's Review Of Google Glass In The Operating Room. For a little over three months now, Dr. 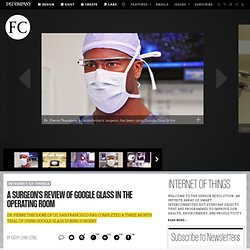 Pierre Theodore, a cardiothoracic surgeon, has been using Google Glass in the operating room. Although he's tapped the functionality during procedures on just 10 patients, for various cancer mass removals, fluid removal, and a lung restoration, Theodore (who we first wrote about in August) may have more experience using Glass in a serious medical setting than any other doctor in the world. His conclusion so far: the technology is indeed useful in the operating room as an adjunct device in delivering necessary information, but it still has miles to go as a product.

The idea for using Google Glass during surgeries came up when he and a colleague at UCSF Medical Center discussed how to implement the device in scenarios where data must be precise and retrieved quickly. Currently, when surgeons need to see X-ray images, they walk away from the operating table to a flat-screen mounted on a wall on another side of the room. Coolest DJ table ever. This Scary Gadget Zaps You When You Get Lazy.

Having trouble concentrating on your work? 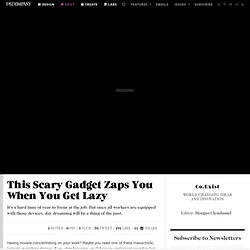 Maybe you need one of these masochistic, laziness-punishing devices. If you stop focusing, you’ll hear an unpleasant sound or feel intense heat, or maybe an annoying buzz and even an electric shock. Or maybe not. The devices, thankfully, aren’t actually on the market, although technically they are possible to make using readily-available electronic parts. London designer Ling Tan wanted people to start thinking a little more critically about the proliferation of self-tracking devices that measure everything from how much we sleep to how many steps we take a day.

Use Your Hands To Sculpt Graphics Like Play-Doh. The Leap Motion is a promising technology still in need of its first killer app. 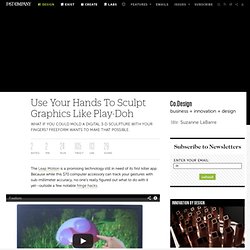 Because while this $70 computer accessory can track your gestures with sub-millimeter accuracy, no one’s really figured out what to do with it yet--outside a few notable fringe hacks. Your Google Glass Will Integrate With Your Next Mercedes-Benz. From behind, Troy Carter looks like a middle schooler. 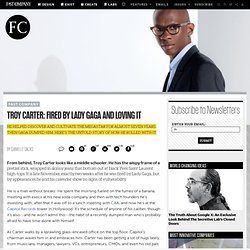 He has the wispy frame of a pretzel stick, wrapped in skinny jeans that bottom out at black Yves Saint Laurent high-tops. It is late November, exactly two weeks after he was fired by Lady Gaga, but by appearances he and his calendar show no signs of vulnerability. Brain–computer interface. A brain–computer interface (BCI), sometimes called a mind-machine interface (MMI), direct neural interface (DNI), synthetic telepathy interface (STI) or brain–machine interface (BMI), is a direct communication pathway between the brain and an external device. BCIs are often directed at assisting, augmenting, or repairing human cognitive or sensory-motor functions.

Research on BCIs began in the 1970s at the University of California Los Angeles (UCLA) under a grant from the National Science Foundation, followed by a contract from DARPA.[1][2] The papers published after this research also mark the first appearance of the expression brain–computer interface in scientific literature. The field of BCI research and development has since focused primarily on neuroprosthetics applications that aim at restoring damaged hearing, sight and movement. History[edit] Ikea's New Catalog Magically Transforms Into Furniture. Most augmented reality apps are silly. Disney's Magical Flashlight Brings Kids' Books To Life. Maybe being the dad of a toddler makes me overly skeptical of "enhanced" or "augmented" children’s books and toys, but I’m usually unimpressed with efforts to future-ify an experience that seems to work just as fine now as it did when Goodnight Moon was first written 66 years ago.

Then I saw HideOut, a new prototype from Disney Research that uses a handheld projector to bring animated characters to life on the surface of a book or board game. Okay, now I’m impressed: A smartphone-sized handheld projector, surprisingly enough, looks like just the right kind of "extra" to add a bit of genuine magic to the experience of reading stories to your kid. MaKey MaKey - An Invention Kit for Everyone. A Look At The New "Kinect" For Smartphones.

Microsoft’s Kinect is incredible technology, but only part of its potential is realized in the living room. That’s a shame. Because beyond gaming and entertainment, there are countless potential uses for its figure recognition and gesture controls in the rest of our world. Now PrimeSense, the company behind Kinect’s mojo, has released new details on their upcoming sensor that will live in the market beyond Microsoft. It’s called Capri. And the biggest improvement is that the hardware has been reduced to 1/10th the size of PrimeSense’s old sensor. Stamp-On Circuits Could Put Your Phone On Your Finger. Transistors. Resistors. Capacitors. What Keeps NFC From Explosive Growth? A Gateway Product. Even Disney agrees, NFC is one of the closest technologies we have to actual magic. 8 Brilliant Concepts For The Future Of Wearable Tech. Wearables are taking over.

Eidos Is Futuristic Headgear That Enhances Your Senses. First Look: How The Google Glass UI Really Works. Google unveils video preview of Google Glass wearable headset. News: Google has released a video preview of Google Glass, the voice-controlled wearable headset that lets users send and receive messages, take pictures and search the web hands-free (+ movie). The video is shot from a first-person perspective as Google Glass wearers use voice commands to control the device. You Can Reach Into This Monitor And Touch The Interface. Gesture controls, like Leap Motion, could bring a slew of new control paradigms to desktop computing. MYO - The Gesture Control Armband.

Behind The Dual-Screen Russian Phone That's Looking To Reinvent The Mobile User Experience. How Adobe Reinvented The Pen To Draw On The Internet.