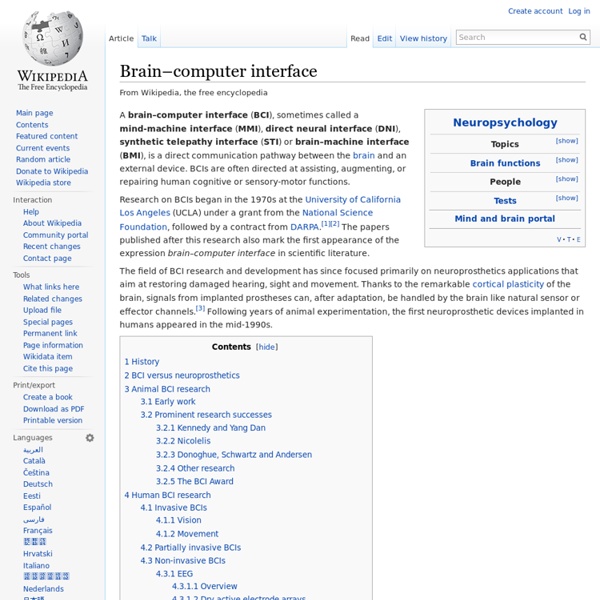 A brain–computer interface (BCI), sometimes called a mind-machine interface (MMI), direct neural interface (DNI), synthetic telepathy interface (STI) or brain–machine interface (BMI), is a direct communication pathway between the brain and an external device. BCIs are often directed at assisting, augmenting, or repairing human cognitive or sensory-motor functions. Research on BCIs began in the 1970s at the University of California Los Angeles (UCLA) under a grant from the National Science Foundation, followed by a contract from DARPA.[1][2] The papers published after this research also mark the first appearance of the expression brain–computer interface in scientific literature. The field of BCI research and development has since focused primarily on neuroprosthetics applications that aim at restoring damaged hearing, sight and movement. History[edit] Berger's first recording device was very rudimentary. BCI versus neuroprosthetics[edit] Animal BCI research[edit] Early work[edit] 2013: M.

'Mind-reading' software could record your dreams - tech - 12 December 2008 Pictures you are observing can now be recreated with software that uses nothing but scans of your brain. It is the first "mind reading" technology to create such images from scratch, rather than picking them out from a pool of possible images. Earlier this year Jack Gallant and colleagues at the University of California, Berkeley, showed that they could tell which of a set of images someone was looking at from a brain scan. To do this, they created software that compared the subject's brain activity while looking at an image with that captured while they were looking at "training" photographs. The program then picked the most likely match from a set of previously unseen pictures.

Carl Jung Carl Gustav Jung (/jʊŋ/; German: [ˈkarl ˈɡʊstaf jʊŋ]; 26 July 1875 – 6 June 1961), often referred to as C. G. Jung, was a Swiss psychiatrist and psychotherapist who founded analytical psychology.[2] Jung proposed and developed the concepts of the collective unconscious, archetypes, and extraversion and introversion. How to Learn Without Memorizing Photo by Edwin Stemp Rote memorization is an inefficient way to learn. Just retaining a single formula can mean pounding the same information into your skull dozens of times. If your computer hard drive had this accuracy, you’d probably throw it out. A Surgeon's Review Of Google Glass In The Operating Room For a little over three months now, Dr. Pierre Theodore, a cardiothoracic surgeon, has been using Google Glass in the operating room. Although he's tapped the functionality during procedures on just 10 patients, for various cancer mass removals, fluid removal, and a lung restoration, Theodore (who we first wrote about in August) may have more experience using Glass in a serious medical setting than any other doctor in the world. His conclusion so far: the technology is indeed useful in the operating room as an adjunct device in delivering necessary information, but it still has miles to go as a product.

Wearable ‘neurocam’ records scenes when it detects user interest (Credit: Neurowear) Keio University scientists have developed a “neurocam” — a wearable camera system that detects emotions, based on an analysis of the user’s brainwaves. The hardware is a combination of Neurosky’s Mind Wave Mobile and a customized brainwave sensor. The algorithm is based on measures of “interest” and “like” developed by Professor Mitsukura and the neurowear team.

NeuroSky NeuroSky, Inc. is a manufacturer of Brain-Computer Interface (BCI) technologies for consumer product applications, which was founded in 2004 in Silicon Valley, California.[1][2][3][4] The company adapts electroencephalography (EEG) and electromyography (EMG) technology to fit a consumer market within a number of fields such as entertainment (toys and games), education, automotive, and health.[5][6] NeuroSky technology allows for low-cost EEG-linked research and products by using inexpensive dry sensors; older EEGs require the application of a conductive gel between the sensors and the head. The systems also include built-in electrical “noise” reduction software/hardware, and utilize embedded (chip level) solutions for signal processing and output.[2][6][7][8] Company Timeline[edit] 1999: The work behind NeuroSky technology began [4][10]

Akashic records Background[edit] Akasha is a Sanskrit word meaning "sky", "space" or "aether", and it entered the language of theosophy through H. P. Blavatsky, who characterized it as a sort of life force; she also referred to "indestructible tablets of the astral light" recording both the past and future of human thought and action, but she did not explicitly identify these as "akashic" in nature.[1] The notion of an akashic record is attributed to Alfred Percy Sinnett, who, in his book Esoteric Buddhism (1884), wrote of a Buddhist belief in "a permanency of records in the Akasa" and "the potential capacity of man to read the same."[2][1] By C. Illusory Correlations: When The Mind Makes Connections That Don’t Exist Why do CEOs who excel at golf get paid more, despite poorer stock market performance? To see how easily the mind jumps to the wrong conclusions, try virtually taking part in a little experiment… …imagine that you are presented with information about two groups of people about which you know nothing.

This Scary Gadget Zaps You When You Get Lazy Having trouble concentrating on your work? Maybe you need one of these masochistic, laziness-punishing devices. If you stop focusing, you’ll hear an unpleasant sound or feel intense heat, or maybe an annoying buzz and even an electric shock. Or maybe not. The devices, thankfully, aren’t actually on the market, although technically they are possible to make using readily-available electronic parts. London designer Ling Tan wanted people to start thinking a little more critically about the proliferation of self-tracking devices that measure everything from how much we sleep to how many steps we take a day.

Biotech Breakthrough: Monkeys can feel virtual objects using a brain implant As long as they figure out which areas to stimulate those problems can be solved with neuro-optics. It works by inserting a gene into the target neurons that makes them fire when exposed to a specific frequency of light. So instead of having to physically insert pieces of metal into the brain they place small laser diodes on the outside of the brain and fire them through the intervening tissue without actually harming it. Since no parts of the device is in direct contact with the brain it can be replaced, or upgraded, without worrying about permanently damage to the brain itself. Someone is already well underway with a "brain pacemaker" for schizophrenics that utilities the principle.

brain waves could quantify libido Monitoring the change in specific brain waves could be the first quantitative method for measuring libido, new research suggests. The technique measures attention, rather than sexual desire specifically, but Yoram Vardi, at Rambam Hospital and the Technion, both in Haifa, Israel told NewScientist: "We found that sexual stimuli are the most potent." So far 30 people with normal sexual function have been tested, but if further tests are successful, Vardi hopes his method will have many applications. These could include quantitatively analysing the libido-lowering (or enhancing) side effects of medication or even supporting legal claims of a reduction in sex drive after an accident. But he cautions that it is too early to say for sure whether it will be possible to establish an absolute measurement scale for libido. Random clips

The Best Way to Win an Argument You are, I'm afraid to say, mistaken. The position you are taking makes no logical sense. Just listen up and I'll be more than happy to elaborate on the many, many reasons why I'm right and you are wrong. Are you feeling ready to be convinced? Whether the subject is climate change, the Middle East or forthcoming holiday plans, this is the approach many of us adopt when we try to convince others to change their minds.

Use Your Hands To Sculpt Graphics Like Play-Doh The Leap Motion is a promising technology still in need of its first killer app. Because while this $70 computer accessory can track your gestures with sub-millimeter accuracy, no one’s really figured out what to do with it yet--outside a few notable fringe hacks. Freeform, a free piece of software by Leap, teases the sort of interface magic we’ve all been hoping for. It places a moldable blob in the middle of your screen. And by selecting various tools (much like you might in Photoshop), you can poke and prod the blob into a 3-D sculpture of your imagination. It's clearly not meant to be a true professional tool--after all, you choose whether you'd like to sculpt in several tranquil scenes like a garden or redwood forest.