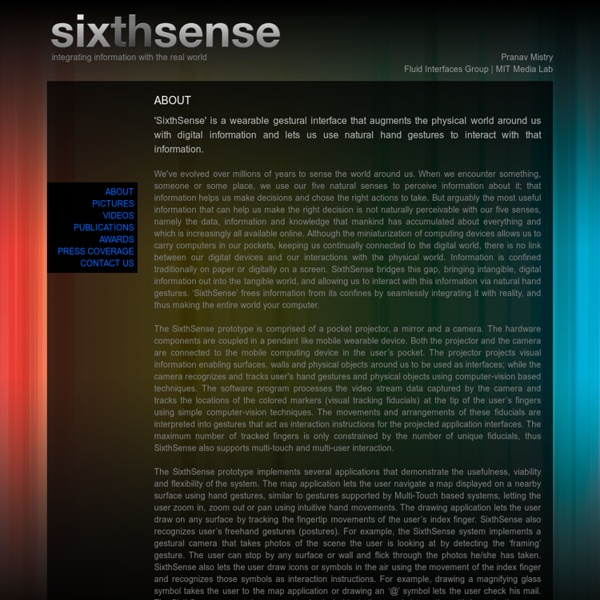 'SixthSense' is a wearable gestural interface that augments the physical world around us with digital information and lets us use natural hand gestures to interact with that information. We've evolved over millions of years to sense the world around us. When we encounter something, someone or some place, we use our five natural senses to perceive information about it; that information helps us make decisions and chose the right actions to take. But arguably the most useful information that can help us make the right decision is not naturally perceivable with our five senses, namely the data, information and knowledge that mankind has accumulated about everything and which is increasingly all available online. Although the miniaturization of computing devices allows us to carry computers in our pockets, keeping us continually connected to the digital world, there is no link between our digital devices and our interactions with the physical world. . . . some more pictures are coming soon.

OmniFocus: My Approach I teach Computing to children and in education there are many Computing terms that we rarely use outside the classroom. For example, we say IT in the real world but ICT (Information and Communications Technology) in school. One term that I think is useful but little used outside of the classroom is General Purpose Package. I think there's an intimidating middle ground, though, between a truly general purpose application like Keynote or Excel and a purely specific purpose app like Photobooth, Google Earth or Skype. Some of the applications I mentioned are easier to approach than others, due to the greater amount of direction (or reduced flexibility) they give to the user's actions. These structured-database applications also come with a relatively high cost if you get your approach wrong early on. Get Focused And so to OmniFocus. That said, I look at OmniFocus not as a "to-do application" but as a "GTD application". My Approach Grand Perspective Review: I use this for weekly review.

Abstractivate: Why Functional Matters: Your white board will never be the same Why learn functional programming? For better design skills! The other day we designed a process to match cleared deposits with dispensations. This is how I would have white-boarded it a few years ago: Since then I've played around with functional programming. It encourages one to think about processing in terms of data streams: data comes in, gets transformed and filtered and manipulated, and finally results are output. Thinking about the problem in this way leads to this kind of diagram: Thinking about the program as a data pipeline keeps me thinking about what needs to happen, instead of how each step should be done. Whatever language we use to write the solution, thinking about it this way has the following advantages: * It breaks down into pieces. In this way, thinking functionally helps with agile (task breakdown), TDD, and maintainability. For how functional thinking helps at a lower level too, check this post.

100+ Ways to Learn Anything on the Internet Learn Anything... Thanks to this amazing collection of educational websites you can become a master in anything from home renovations to rocket science, maths to photography, art to computer programming. What are you going to master today? TED Talks TED is a global community, welcoming people from every discipline and culture who seek a deeper understanding of the world. Chesscademy Chesscademy offers free online lessons for people around the world who want to learn how to play chess or improve their existing game. Microsoft DreamSpark Programs DreamSpark is a Microsoft Program that supports technical education by providing access to Microsoft software for learning, teaching and research purposes. How Stuff Works HowStuffWorks got its start in 1998 at a college professor's kitchen table. Fora.tv Fora TV records some of the worlds best conferences, speeches and events. MusicTheory.net MusicTheory.net offers sevearl apps that you can use to learn music from your phone. Justin Guitar eHow Home EdX

The Weekly Review as an OmniFocus Project I've recently been getting my GTD system back together in the aftermath of the Viewfinder release. Most systems get out of whack in the run-up to software releases, but you always have to get back in the saddle. As I was reorganising my OmniFocus, I started to think that it would be great if OmniFocus could help you through the weekly review. Instead of waiting for Omni to build that into the software I figured out how to make the weekly review a project. I took the standard list of weekly review steps from the Getting Things Done book and added them into a project: The insight here is in the repeat settings. Set the project to "Mark complete when completing last item"Set the project to "Start again 1 week after completion" These settings mean that, whenever I complete a Weekly Review project, another project will immediately appear with a due date one week hence. Download Here's an OmniOutliner file template that you can import into your OmniFocus database with the actions and notes.

101 Google Tips, Tricks & Hacks Looking for the ultimate tips for Google searching? You've just found the only guide to Google you need. Let's get started: 1. 2. 3. 4. 5. 6. 7. 8. 9. 10. 11. 12. 13. 14. 15. 16. 17. 18. 19. 20. 21. 22. 23, In fact, you can combine any Boolean search operators, as long as your syntax is correct. 24. 25. 26. 27. 28. 29. 30. 31. 32. 33. PCs of the near future: Intel lays out next-gen plans | CES 2013 LAS VEGAS--PCs on your coffee table, playing Monopoly. Super-thin ultrabooks. Voice and gestural computing. Fourth-gen Intel Core processors aren't on their way immediately, but at this year's CES Intel was ready to demonstrate how its "Haswell" code-named chips will make Windows 8 devices of tomorrow even thinner and smaller than now ... if you're in need of that. Haswell is part of Intel's road map for computers into 2014, and the biggest gains could be in battery life and extra features normally not seen in laptops. Intel also demonstrated table-top computers, some of which are here already in devices like the Vaio Tap 20 . Perceptual computing was demonstrated via eye-tracking software and motion-control technology, using a Kinect-like peripheral from Creative that adds 10-finger gesture recognition. Finally, Intel even dabbled in pay TV.

Vast Web of Dark Matter Mapped — By analyzing the light from 10 million galaxies, astronomers have built the largest dark matter map ever created. — The map visualizes an intricate cosmic web of dark matter and galaxies one billion light-years across. — Understanding the structure of dark matter will help us understand the evolution of the Universe. Astronomers have created a vast cosmic map revealing an intricate web of dark matter and galaxies spanning a distance of one billion light-years. This unprecedented task was achieved not by observing dark matter directly, but by observing its gravitational effects on ancient light traveling from galaxies that existed when the Universe was half the age it is now. Constructed by astronomers from the University of British Columbia and the University of Edinburgh, this is the largest dark matter map ever built and took five years to complete. The research was presented at the American Astronomical Society meeting in Austin, Texas, on Monday. SCIENCE CHANNEL VIDEO: Dark Energy

How to Create an Effective Business Continuity Plan We rarely get a head's up that a disaster is ready to strike. Even with some lead time, though, multiple things can go wrong; every incident is unique and unfolds in unexpected ways. This is where a business continuity plan comes into play. To give your organization the best shot at success during a disaster, you need to put a current, tested plan in the hands of all personnel responsible for carrying out any part of that plan. The lack of a plan doesn't just mean your organization will take longer than necessary to recover from an event or incident. You could go out of business for good. How Business Continuity, Disaster Recovery Plans Differ Business continuity (BC) refers to maintaining business functions or quickly resuming them in the event of a major disruption, whether caused by a fire, flood, epidemic illness or a malicious attack across the Internet. Tutorial: How to Start a Business Continuity Program Note that a business impact analysis (BIA) is another part of a BC plan.

One Per Cent: Hands on with Leap Motion's gestural interface Niall Firth, technology editor I'm slicing and dicing my way through melons as if my life depends on it, every twitch of my finger dispatching another pile of soft fruit. This is Fruit Ninja as it has never been played before - using the Leap, the much-hyped gestural control device made by start-up firm Leap Motion that is set to launch worldwide in March. The device itself is a small box, just 8 centimetres long, which contains infrared cameras that can track each finger independently at an accuracy of 1/100th of a millimetre. It creates an invisible 3D box above the device in which your fingers are tracked 290 times per second. Teaser videos have confirmed the Leap's status as The Next Big Thing and, now that software developers have had a chance to get their hands on it and give their feedback, it is due to launch worldwide. Is it worth the hype? It's clever and intuitive stuff - but what's it going to be used for?

How to Transfer and Move Hotmail to Gmail – My Digital Life Windows Live Hotmail (previously known as MSN Hotmail or simply Hotmail) has upgraded its user interface to new Outllook lookalike AJAX-intensive interface, and has successfully annoyed many existing users of Hotmail. Gmail turns out to be a good alternative if you decided to dump Hotmail and switch to other webmail service provider. Or for any reason, such as love the features and loading speed of Gmail, you want to transfer and move all your Hotmail email messages to Gmail, there is a very simple way to do it. The trick to transfer and move mails in Hotmail to Gmail or vice versa from Gmail to Hotmail is by using IMAP support of Gmail and HTTP server support of Hotmail and MSN. Hotmail is typically a webmail service and Microsoft does not provides free POP3, IMAP and forwarding options for non-paying users. To move and transfer from Hotmail to Gmail, firstly, configure and set up your Hotmail e-mail account on one of the supported mail client mentioned above. Notes:

this is the most inexpensive and creative approach to augmented reality that I have seen. by extantproject Dec 9