Disappearing Shanghai. All photography is a record of a lost past. 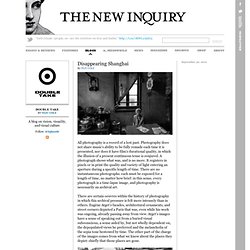 Photography does not share music’s ability to be fully remade each time it is presented, nor does it have film’s durational quality, in which the illusion of a present continuous tense is conjured. A photograph shows what was, and is no more. It registers in pixels or in print the quality and variety of light entering an aperture during a specific length of time.

There are no instantaneous photographs: each must be exposed for a length of time, no matter how brief: in this sense, every photograph is a time-lapse image, and photography is necessarily an archival art. There are certain oeuvres within the history of photography in which this archival pressure is felt more intensely than in others. The same kind of embedded charge, that of evanescence caught on the wing, can be felt in all the photographs presented in Disappearing Shanghai, the new book by Howard French. The images in Disappearing Shanghai contain the same fine surprise. Guardian Artangel books podcast: Teju Cole. Palimpsest City. Teju Cole interviewed by Max Liu. 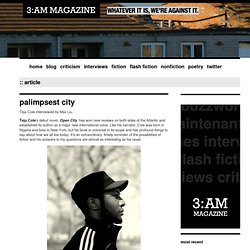 Teju Cole‘s debut novel, Open City, has won rave reviews on both sides of the Atlantic and established its author as a major new international voice. Like his narrator, Cole was born in Nigeria and lives in New York, but his book is universal in its scope and has profound things to say about how we all live today. It’s an extraordinary, timely reminder of the possibilities of fiction and his answers to my questions are almost as interesting as his novel. 3:AM: In another interview you said you had thought about “the problems of writing fiction” for a long time. But what about thinking while writing? Teju Cole: Yes, there’s truth in what Didion says. 3:AM: Increasingly, novels are praised for how much of the culture they manage to include. TC: In a sense, Open City is a kind of Wunderkammer, one of those little rooms assembled with bric-a-brac by Renaissance scholars. 3:AM: You write: “All the city is a palimpsest.” 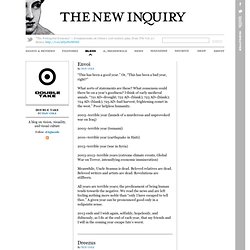 While one man led prayers at Christ Happyhome Church in Sango Ota, three of his accomplices robbed the congregation. 2 Shamsudeni was sleeping in Nyanya when Abubakar sneaked into his house, crept into his bed, and woke up part of him. The Book Bench: W. G. Sebald’s Poetry of the Disregarded. Throughout his career, W. G. Sebald wrote poems that were strikingly similar to his prose. His tone, in both genres, was always understated but possessed of a mournful grandeur. To this he added a willful blurring of literary boundaries and, in fact, almost all his writing, and not just the poetry and prose, comprised history, memoir, biography, autobiography, art criticism, scholarly arcana, and invention. This expert mixing of forms owed a great deal to his reading of the seventeenth-century melancholics Robert Burton and Thomas Browne, and Sebald’s looping sentences were an intentional homage to nineteenth-century German-language writers like Adalbert Stifter and Gottfried Keller.

Sebald’s reputation rests on four novels—“Vertigo,” “The Emigrants,” “The Rings of Saturn,” and “Austerlitz”—all of them reflections on the history of violence in general, and on the legacy of the Holocaust in particular. Strasbourg Cathedral bien éclairée. The later poems are cleaner, clearer. Death by Twitter. On Teju Cole’s small fates Gary Robinson once tried to cut seven people in line at a Church’s Chicken in Miami. It was near closing time. He wanted a small box of fried chicken, which in those days — 1985 — sold for $2.19. He was rude, but he listened when the young woman at the register told him to go wait in line like everybody else. When his turn came, the Church’s ran out of chicken. Gary Robinson was not an important man. And that’s how a nobody died famous.

Most of us are nobodies, and we have a few writers who make nobodies famous. Simple Tweets Of Fate: Teju Cole's Condensed News. Teju Cole is a Nigerian-American writer, photographer and art historian. 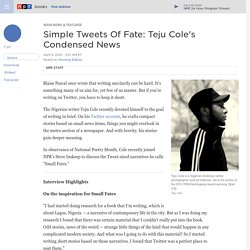 He is the author of the 2012 PEN/Hemingway Award-winning Open City. Teju Cole hide caption toggle caption Teju Cole Blaise Pascal once wrote that writing succinctly can be hard. The Nigerian writer Teju Cole recently devoted himself to the goal of writing in brief. In observance of National Poetry Month, Cole recently joined NPR's Steve Inskeep to discuss the Tweet-sized narratives he calls "Small Fates. " Interview Highlights On the inspiration for Small Fates "I had started doing research for a book that I'm writing, which is about Lagos, Nigeria — a narrative of contemporary life in the city.

On faits divers "In doing this, I was leaning on the old French journalistic practice of the faits divers, which has not really caught on that much in the English-speaking world. On dark humor.