The Surprising Source of Our Sexual Morals. Pablo Hidalgo/Shutterstock People often ask what kind of human sexual relationship is most evolutionarily "natural. 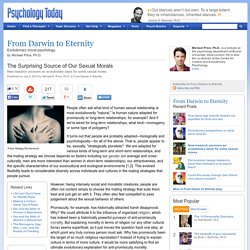 Schizophrenia is actually eight genetically distinct disorders, study reveals. New research has revealed that schizophrenia is not a single disease, but eight different disorders with their own set of symptoms. 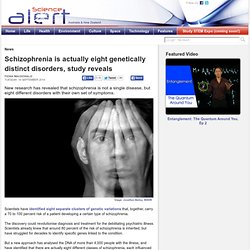 Scientists have identified eight separate clusters of genetic variations that, together, carry a 70 to 100 percent risk of a patient developing a certain type of schizophrenia. The discovery could revolutionise diagnosis and treatment for the debilitating psychiatric illness. Scientists already knew that around 80 percent of the risk of schizophrenia is inherited, but have struggled for decades to identify specific genes linked to the condition. But a new approach has analysed the DNA of more than 4,000 people with the illness, and have identified that there are actually eight different classes of schizophrenia, each influenced by distinct gene clusters.

Givers, Takers, and Matchers: The Surprising Science of Success. Seven Ways That Music Benefits Your Health. “I think music in itself is healing. 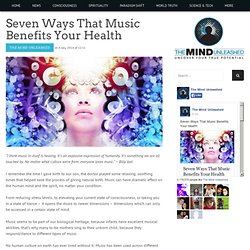 It’s an explosive expression of humanity. It’s something we are all touched by. Psychologists Have Uncovered a Troubling Feature of People Who Seem Too Nice. In 1961, curious about a person's willingness to obey an authority figure, social psychologist Stanley Milgram began trials on his now-famous experiment. 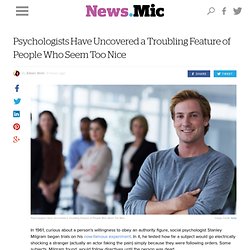 In it, he tested how far a subject would go electrically shocking a stranger (actually an actor faking the pain) simply because they were following orders. Some subjects, Milgram found, would follow directives until the person was dead. The news: A new Milgram-like experiment published this month in the Journal of Personality has taken this idea to the next step by trying to understand which kinds of people are more or less willing to obey these kinds of orders. 10 Surprising Things That Benefit Our Brain That You Can Do Everyday. Our brains are by far one of our most important organs. 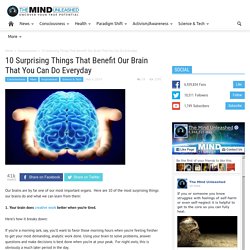 Here are 10 of the most surprising things our brains do and what we can learn from them: 1. Your brain does creative work better when you’re tired. Scientists Link Selfies To Narcissism, Addiction & Mental Illness. The growing trend of taking smartphone selfies is linked to mental health conditions that focus on a person’s obsession with looks. 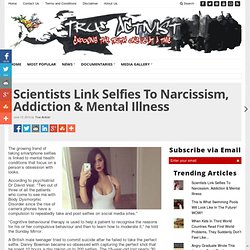 According to psychiatrist Dr David Veal: “Two out of three of all the patients who come to see me with Body Dysmorphic Disorder since the rise of camera phones have a compulsion to repeatedly take and post selfies on social media sites.” “Cognitive behavioural therapy is used to help a patient to recognise the reasons for his or her compulsive behaviour and then to learn how to moderate it,” he told the Sunday Mirror. A British male teenager tried to commit suicide after he failed to take the perfect selfie. Danny Bowman became so obsessed with capturing the perfect shot that he spent 10 hours a day taking up to 200 selfies. The 19-year-old lost nearly 30 pounds, dropped out of school and did not leave the house for six months in his quest to get the right picture.

13 things mentally strong people don’t do. Fixed vs. Growth: The Two Basic Mindsets That Shape Our Lives. By Maria Popova “If you imagine less, less will be what you undoubtedly deserve,” Debbie Millman counseled in one of the best commencement speeches ever given, urging: “Do what you love, and don’t stop until you get what you love. 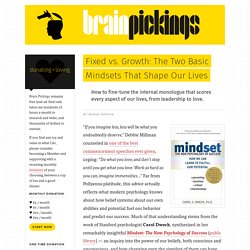 Work as hard as you can, imagine immensities…” Far from Pollyanna platitude, this advice actually reflects what modern psychology knows about how belief systems about our own abilities and potential fuel our behavior and predict our success. How to Diagnose an Unhealthy Relationship. Once I ran to you, now I'll run from you This tainted love you've given, I give you all a boy could give you Take my tears and that's not nearly all Tainted love. -- "Tainted Love," Ed Cobb, 1964 When someone says they've fallen in love with you, it can be hard to tell if they love you in a healthy way, or if their love is tainted. 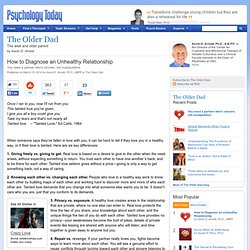 Here are six key differences: 1. Giving freely vs. giving to get. Know When to Walk Away. Growing up, few of us learn when to keep going toward a long-range goal and when to consider stopping. 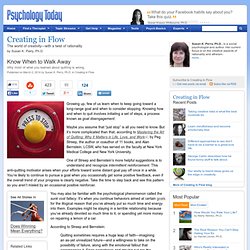 Knowing how and when to quit involves initiating a set of steps, a process known as goal disengagement. Maybe you assume that “just stop” is all you need to know. But it’s more complicated than that, according to Mastering the Art of Quitting: Why It Matters in Life, Love, and Work, by Peg Streep, the author or coauthor of 11 books, and Alan Bernstein, LCSW, who has served on the faculty at New York Medical College and New York University. One of Streep and Bernstein’s more helpful suggestions is to understand and recognize intermittent reinforcement. This anti-quitting motivator arises when your efforts toward some distant goal pay off once in a while. Michigan State Coach Offers Moving Eulogy for 'Princess' Lacey. Lacey Holsworth, the 8-year-old girl who struck up an unlikely friendship with Michigan State basketball star Adreian Payne, died this week after a long bout with cancer. 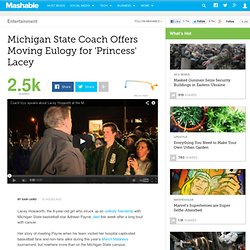 Her story of meeting Payne when his team visited her hospital captivated basketball fans and non-fans alike during this year's March Madness tournament, but nowhere more than on the Michigan State campus. The school held a vigil for Lacey on Wednesday night, and Spartans coach Tom Izzo showed up to deliver a moving speech to the students in attendance. Izzo's speech runs about eight minutes in the video above, and really gets going at about the two-minute mark. He talks about Lacey's impact on the team this season, on Payne's life and maturation, the world beyond Michigan State and what others can — and should — learn from her story. Men with eating disorders are failed because conditions are seen as "women's illnesses," scientists claim - Health News - Health & Families.

While some figures estimate that males account for a quarter of eating disorder cases, young men who suffer from diseases including anorexia are “underdiagnosed, undertreated and underresearched,” according to a study published in the online journal ‘BMJ Open’ on Wednesday. To make their findings, scientists interviewed 39 young people aged 16 to 25, including 10 men, who they found from patient organisations, social media, and via healthcare professionals. Participants were questioned about their experiences when they were diagnosed with an eating disorder, as well as the treatment and support they received after. Six Things Everyone With Depression Should Do Each Day. Photo: Basykes/Flickr. How Body Language Lets Us Down. Phillip-hodson-heavy-drinking-workaholism-and-road-rage-can-all-mask-depression-in-men-9217641. And that is how the Duke of Westminster came to take three months off in order to recover from a major depressive breakdown.

Would that other men could be so well-advised or in a position to finance the opportunity. By and large, men wouldn't touch such a confession with a barge pole. It seems to me there's a paradox in the depression literature, suggesting that while women provide the greatest symptomology of self-dislike, low self-esteem, pessimistic and negative personal thinking, leading to classical self-harming behaviours, men suffer from equally severe emotional problems. With exceptions such as the noble Duke, they just don't talk about them. The official position is that currently one in six adults is depressed and women are twice as likely as men to get the diagnosis.

A Better Way to Wake Up. It could be you: Welcome to the dizzying world of instant wealth - Home News - UK. 10 Things Highly Intuitive People Do Differently. Intuition is challenging to define, despite the huge role it plays in our everyday lives. Friendship: The Laws of Attraction. Five Things People With Depression Can Do to Stop Being Stigmatized. Mind over cancer: can meditation aid recovery? Cancer leaves many scars. For survivors, the wounds that run deepest are often those left on the mind.

Fear, anxiety and depression are common during recovery. Overcoming Loneliness. What the Psychology of Suicide Prevention Teaches Us About Controlling Our Everyday Worries. By Maria Popova Two surprisingly simple yet effective techniques for ameliorating anxiety. This is What Happens to Your Body When You're In Love ... And Angry ... And Sad.

OK, this is cool. So you know how when you feel an especially strong emotion, you really feel it, like actually physically feel it? The incredibly annoying psychology of Christmas holiday regression. Stuart Firestein: The pursuit of ignorance. Euan Ferguson: 'I think,' I stuttered... 'I think I've had a stroke' Male and female brains wired differently, scans reveal. Feeling depressed? Maybe you need to knead: New research reveals how baking is helping to lift thousands of people out of depression - Health News - Health & Families. The Brains behind Challenging Coaching. Kathryn Schulz: On being wrong. Three Essential Facts About Feelings.