Subclavian artery stenosis. Medications Used to Treat Carotid Artery Disease. If you have been diagnosed with carotid artery disease, unfortunately, you are at greater risk of a first or recurrent stroke. 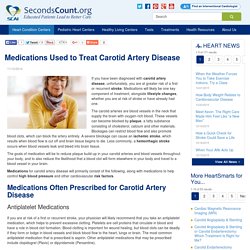 Medications will likely be one key component of treatment, alongside lifestyle changes, whether you are at risk of stroke or have already had one. The carotid arteries are blood vessels in the neck that supply the brain with oxygen-rich blood. These vessels can become blocked by plaque, a fatty substance consisting of cholesterol, calcium and other materials. Blockages can restrict blood flow and also promote blood clots, which can block the artery entirely. A severe blockage can cause an ischemic stroke, which results when blood flow is cut off and brain tissue begins to die. The goals of medication will be to reduce plaque build-up in your carotid arteries and blood vessels throughout your body, and to also reduce the likelihood that a blood clot will form elsewhere in your body and travel to a blood vessel in your brain.

Antiplatelet Medications Learn More. An Algorithm for the Evaluation of Peripheral Neuropathy. The diagnosis of peripheral neuropathies can be frustrating, time consuming and costly. 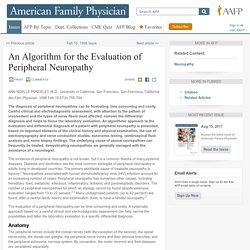 Careful clinical and electrodiagnostic assessment, with attention to the pattern of involvement and the types of nerve fibers most affected, narrows the differential diagnosis and helps to focus the laboratory evaluation. An algorithmic approach to the evaluation and differential diagnosis of a patient with peripheral neuropathy is presented, based on important elements of the clinical history and physical examination, the use of electromyography and nerve conduction studies, autonomic testing, cerebrospinal fluid analysis and nerve biopsy findings. 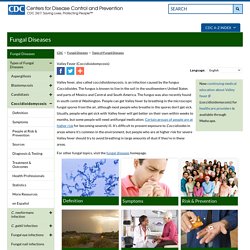 Aphasia. Aphasia (/əˈfeɪʒə/, /əˈfeɪziə/ or /eɪˈfeɪziə/; from Ancient Greek ἀφασία aphasia meaning,[1] "speechlessness",[2] derived from ἄφατος aphatos, "speechless"[3] from ἀ- a-, "not, un" and φημί phemi, "I speak") is a disturbance of the comprehension and formulation of language caused by dysfunction in specific brain regions.[4][5] This class of language disorder ranges from having difficulty remembering words to losing the ability to speak, read, or write. 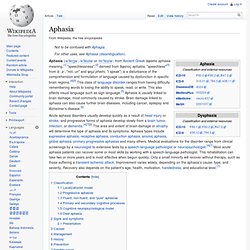 This also affects visual language such as sign language.[5] Aphasia is usually linked to brain damage, most commonly caused by stroke. Brain damage linked to aphasia can also cause further brain diseases, including cancer, epilepsy and Alzheimer's disease.[6] Classification[edit] Classifying the different subtypes of aphasia is difficult and has led to disagreements among experts.

Aspergillosis: MedlinePlus Medical Encyclopedia. Aspergillosis is an infection or allergic response due to the Aspergillus fungus. 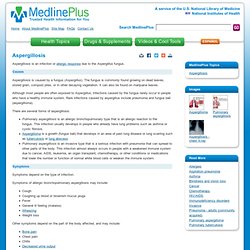 Causes Aspergillosis is caused by a fungus (Aspergillus). The fungus is commonly found growing on dead leaves, stored grain, compost piles, or in other decaying vegetation. It can also be found on marijuana leaves. Although most people are often exposed to Aspergillus, infections caused by the fungus rarely occur in people who have a healthy immune system. Avoidant personality disorder. Avoidant personality disorder (AvPD), also known as anxious personality disorder,[1] is a Cluster C personality disorder recognized in the Diagnostic and Statistical Manual of Mental Disorders handbook as afflicting persons when they display a pervasive pattern of social inhibition, feelings of inadequacy, extreme sensitivity to negative evaluation, and avoidance of social interaction.[2] Individuals afflicted with the disorder tend to describe themselves as ill at ease, anxious, lonely, and generally feel unwanted and isolated from others.[3] People with avoidant personality disorder often consider themselves to be socially inept or personally unappealing and avoid social interaction for fear of being ridiculed, humiliated, rejected, or disliked. 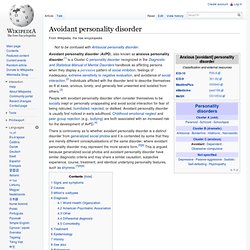 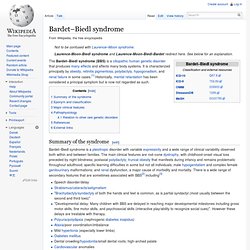 See below for an explanation. The Bardet–Biedl syndrome (BBS) is a ciliopathic human genetic disorder that produces many effects and affects many body systems. It is characterized principally by obesity, retinitis pigmentosa, polydactyly, hypogonadism, and renal failure in some cases.[1] Historically, mental retardation has been considered a principal symptom but is now not regarded as such. Compulsive overeating. Compulsive overeating, called in formal terms binge eating is also considered a food addiction, and the condition is characterized by the compulsive eating of food. 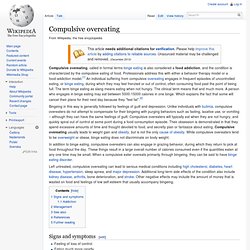 Professionals address this with either a behavior therapy model or a food-addiction model.[1] An individual suffering from compulsive overeating engages in frequent episodes of uncontrolled eating, or binge eating, during which they may feel frenzied or out of control, often consuming food past the point of being full. The term binge eating as slang means eating when not hungry. The clinical term means that and much more. Dystonia. History[edit] The term "dystonia" was first used in 1911, by Hermann Oppenheim.[2] Classification[edit] Types of dystonia[edit] Generalized dystonias[edit] Normal birth history and milestonesAutosomal dominantChildhood onsetStarts in lower limbs and spreads upwardsAlso known as torsion dystonia or idiopathic torsion dystonia (old terminology "dystonia musculorum deformans") Focal dystonias[edit] These are the most common dystonias and tend to be classified as follows: 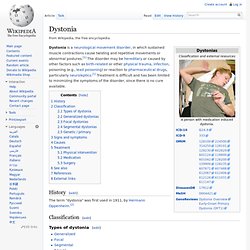 Erythromelalgia. Erythromelalgia, formerly known as Mitchell's disease (after Silas Weir Mitchell), acromelalgia, red neuralgia, or erythermalgia,[1] is a rare neurovascular peripheral pain disorder in which blood vessels, usually in the lower extremities or hands, are episodically blocked (frequently on and off daily), then become hyperemic and inflamed. 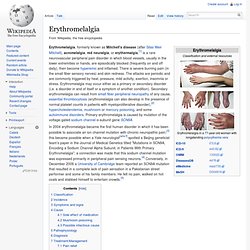 There is severe burning pain (in the small fiber sensory nerves) and skin redness. The attacks are periodic and are commonly triggered by heat, pressure, mild activity, exertion, insomnia or stress. Formication. Formication is the medical term for a sensation that exactly resembles that of small insects crawling on (or under) the skin. It is one specific form of a set of sensations known as paresthesias, which also include the more common prickling, tingling sensation known as "pins and needles". Formication is a well documented symptom, which has numerous possible causes. The word is derived from formica, the Latin word for ant. Guillain-Barré Syndrome Fact Sheet. Inappropriate sinus tachycardia. Inappropriate Sinus Tachycardia (IST) is a rare type of cardiac arrhythmia, within the category of supraventricular tachycardia (SVT). IST may be caused by the sinus node itself having an abnormal structure or function, or it may be part of a problem called dysautonomia, a disturbance and/or failure of the autonomic nervous system.

Research into the mechanism and etiology (cause) of Inappropriate Sinus Tachycardia is ongoing. The mechanism and primary etiology of Inappropriate Sinus Tachycardia has not been fully elucidated. An autoimmune mechanism has been suggested as several studies have detected autoantibodies that activate beta adrenoreceptors in a portion of patients.[1][2] The mechanism of the arrhythmia primarily involves the sinus node and peri-nodal tissue[3] and does not require the AV node for maintenance. Treatments in the form of pharmacological therapy or catheter ablation are available, although it is currently difficult to treat successfully.

Neurasthenia. Neurasthenia is a term that was first used at least as early as 1829 to label a mechanical weakness of the actual nerves, rather than the more metaphorical "nerves" referred to by George Miller Beard later. Neurasthenia is currently a diagnosis in the World Health Organization's International Classification of Diseases (and the Chinese Society of Psychiatry's Chinese Classification of Mental Disorders). However, it is no longer included as a diagnosis in the American Psychiatric Association's Diagnostic and Statistical Manual of Mental Disorders. Americans were said to be particularly prone to neurasthenia, which resulted in the nickname "Americanitis"[2] (popularized by William James). Raynaud's phenomenon. In medicine, Raynaud's phenomenon /reɪˈnoʊz/ or Raynaud phenomenon is excessively reduced blood flow in response to cold or emotional stress, causing discoloration of the fingers, toes, and occasionally other areas.

This condition may also cause nails to become brittle with longitudinal ridges. Named after French physician Maurice Raynaud (1834–1881), the phenomenon is believed to be the result of vasospasms that decrease blood supply to the respective regions. A Disease Without a Cure Spreads Quietly in the West. Paresthesia. Polymyalgia rheumatica - PubMed Health. Polyphagia. Polyphagia or hyperphagia refers to excessive hunger or increased appetite.[1] It derives from the Greek words πολύς (polys) which means "very much" or "many", and φαγῶ (phago) meaning "eating" or "devouring". Schizoid personality disorder. SPD is not the same as schizophrenia, although they share such similar characteristics as detachment and blunted affect. Torticollis: MedlinePlus Medical Encyclopedia. Torticollis is a twisted neck in which the head is tipped to one side, while the chin is turned to the other. Causes. Dr Jon Brock.

Hello. My name's Jon Brock. I'm an Australian Research Fellow at the ARC Centre for Cognition and its Disorders and the Department of Cognitive Science at Macquarie University in Sydney, Australia. My research focuses on the cognitive and neural mechanisms involved in a range of developmental disorders. Low Magnesium Plays a Role in Insulin Resistance & Diabetes. This is a Flash-based video and may not be viewable on mobile devices. Visit the Mercola Video Library By Dr. Mercola. Dr. Scott Saunders: Type 2 Diabetes the Fastest-Growing Disease in the West. Fluoroquinolone Antibiotics May Cause Permanent Nerve Damage. By Dr. Mercola.

Management of Cervical Dysplasia and Human Papillomavirus. The page you are looking for might have been removed, had its name changed, or is temporarily unavailable. Please try the following: Technical Information (for support personnel)