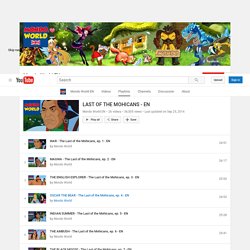 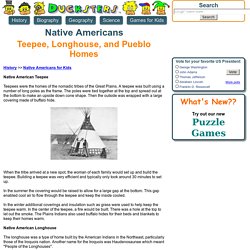 A teepee was built using a number of long poles as the frame. The poles were tied together at the top and spread out at the bottom to make an upside down cone shape. Then the outside was wrapped with a large covering made of buffalo hide. Native American History for Kids: Tribes and Regions. History >> Native Americans for KidsNative Americans were often grouped into tribes or nations. These groupings were generally based on peoples that shared the same culture, language, religion, customs, and politics. There are over 1000 Native American Tribes in the United States.

Sometimes tribes were also grouped by the region of the United States they lived in (like the Great Plains Indians) or by the type of language they spoke (like the Apache). Below are some of the major groupings and tribes. Classification of Indigenous Peoples of North America by Nikater. Native American History for Kids: Clothing. Long Fox-To-Can-Has-Ka by Unknown History >> Native Americans for Kids Native American clothing prior to the arrival of Europeans was different depending on the tribe and the climate where the tribe lived. 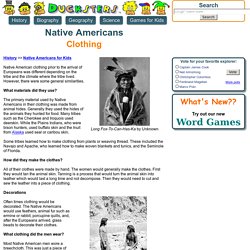 However, there were some general similarities. Ducksters: Education Site.