Brad Pitt - Movies, Age & Children. Actor and producer Brad Pitt is an Academy Award and Golden Globe winner known for such films as 'Legends of the Fall,' 'Fight Club,' 'The Curious Case of Benjamin Button,' 'Moneyball' and '12 Years a Slave.' Who Is Brad Pitt? 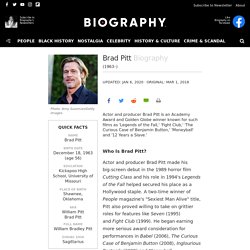 Actor and producer Brad Pitt made his big-screen debut in the 1989 horror film Cutting Class and his role in 1994's Legends of the Fall helped secured his place as a Hollywood staple. A two-time winner of People magazine's "Sexiest Man Alive" title, Pitt also proved willing to take on grittier roles for features like Seven (1995) and Fight Club (1999). He began earning more serious award consideration for performances in Babel (2006), The Curious Case of Benjamin Button (2008), Inglourious Basterds (2009) and Moneyball (2011), winning his first Oscar in the best picture category as a producer for 12 Years a Slave (2013). Early Life However, the young college student had other, quiet aspirations that were the product of a childhood love of movies. 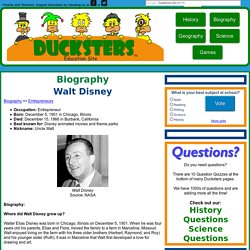 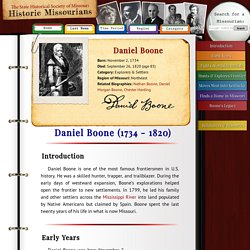 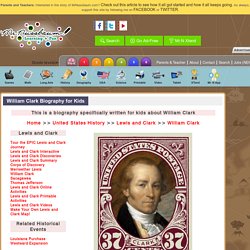 At age 14, Clark moved from Virginia to Louisville, Kentucky. Five years later, in 1789, Clark joined the militia to help fight the Native Americans in the Ohio Valley. After becoming an officer in the US Army, Clark retired from service and went back to Virginia to manage his family’s estate. Introduction . Jesse James . American Experience . WGBH. Missouri State Archives Jesse James in 1882 The story of Jesse James is one of America's most familiar myths -- and one of its most wrong-headed. 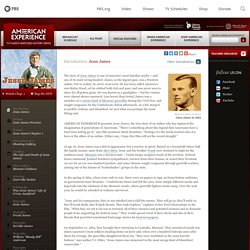 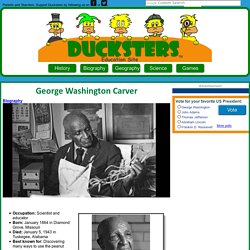 George was born in 1864 on a small farm in Diamond Grove, Missouri. His mother Mary was a slave owned by Moses and Susan Carver. George was raised by the Carvers. Growing up George liked to learn about things. Browse by Last Name - Historic Missourians - The State Historical Society of Missouri. Clark, William. Clark, William, 1770–1838, American explorer, one of the leaders of the Lewis and Clark expedition, b. 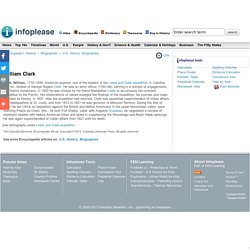 Caroline co., Va.; brother of George Rogers Clark. He was an army officer (1792–96), serving in a number of engagements with Native Americans. In 1803 he was chosen by his friend Meriwether Lewis to accompany the overland expedition to the Pacific. His observations of nature enlarged the findings of the expedition; his journals and maps recorded its history. Omar Bradley . Battle of the Bulge . WGBH American Experience. U.S. 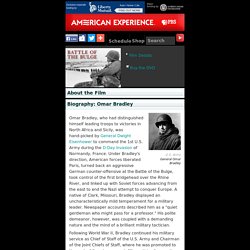 Army General Omar Bradley Omar Bradley, who had distinguished himself leading troops to victories in North Africa and Sicily, was hand-picked by General Dwight Eisenhower to command the 1st U.S. Army during the D-Day invasion of Normandy, France. Under Bradley's direction, American forces liberated Paris, turned back an aggressive German counter-offensive at the Battle of the Bulge, took control of the first bridgehead over the Rhine River, and linked up with Soviet forces advancing from the east to end the Nazi attempt to conquer Europe. 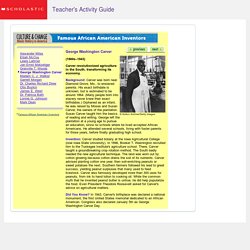 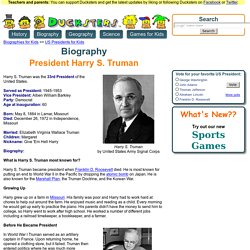 Truman by United States Army Signal Corps Harry S. Truman was the 33rd President of the United States. Laura Ingalls Wilder Biography. Laura Ingalls Wilder is a well-known American author. Her "Little House" books are based on her childhood remembrances. She was born in 1867. Her father was Charles Ingalls and her mother was Caroline Quiner Ingalls. They were both from pioneer families who lived in the mid 1800's. Her mother became a teacher at age 16 earning about $3 a week which she used to help support the family of nine. After her parents' marriage they moved to a log cabin in Wisconsin. Smithsonian American Art Museum. Biography Two passions—art and politics—dominated Bingham's life and career, and he was more successful at the former than the latter, In 1819 his family moved to Franklin, Missouri, on the Lewis and Clark Trail, were he grew up and became an itinerant preacher and portrait painter.

In 1838, after studying briefly at the Pennsylvania Academy of the Fine Arts in Philadelphia, he exhibited Western Boatmen Ashore (unlocated) in New York at the Apollo Association, the forerunner of the American Art-Union. Through the latter organization Bingham sold numerous important pictures during the next decade. Explorers for Kids: Lewis and Clark. Meriwether Lewis and William Clarkby Unknown Biography for Kids >> Explorers for Kids Occupation: Explorers Born: August 18, 1774 in Ivy, Virginia (Lewis) August 1, 1770 in Ladysmith, Virginia (Clark) Died: October 11, 1809 in Hohenwald, Tennessee (Lewis) September 1, 1838 in St.

Louis, Missouri (Clark) Best known for: Explored the Louisiana Territory and Western North AmericaBiography: Lewis and Clark were asked by President Thomas Jefferson to explore and map the wild west of North America. They traveled across the country to the Pacific Ocean and back again. Disney, Walt. Timeline . Truman . American Experience . WGBH. Daniel Boone Biography for Kids « Print This Biography Introduction Daniel Boone was a famous American pioneer, best known for exploring and settling Kentucky. Daniel was born on October 22, 1734 near present-day Reading, Pennsylvania. He was the son of a Quaker weaver and blacksmith and had 10 brothers and sisters Into the Wilderness From an early age, Daniel loved exploring. Kentucky. America's Film Treasures. Fall 2004, Vol. 36, No. 3 A Boy Who Would Be President: Harry Truman at School, 1892–1901. Kit Carson - Military Leader, Explorer, Folk Hero. Kit Carson was an American frontiersman, trapper, soldier and Indian agent who made an important contribution to the westward expansion of the United States.

Synopsis A chance encounter in 1842 with the explorer John C. Frémont made Kit Carson an active participant in extending the boundaries of the United States to its present size. From 1846 until the end of the war with Mexico, he alternated fighting and guiding. In 1854 he became an Indian agent at Taos for the Ute. Early Life. Samuel Clemens (Mark Twain) Biography. On the night Samuel Langhorne Clemens was born Halley's comet was visible in the sky. All About Laura Ingalls Wilder. Source: The National Archives and Records Administration Laura Ingalls Wilder has said that she and her sisters were busy and happy as children but loved Pa's stories the best. The Fall of Jesse James and the James-Younger Gang - Newspaper and Current Periodical Reading Room (Serial and Government Publications Division, Library of Congress)

Jesse James and the James-Younger gang were some of the most feared outlaws of antebellum America. Cast as heroes by some and villains by others, the former Confederate guerillas robbed banks and trains across America for over a decade. Explorers for Kids: Daniel Boone. Daniel Booneby Alonzo Chappel. Blow, Susan Elizabeth. PBS - THE WEST - Kit Carson. Josephine Baker: Image and Icon.