Gaming addiction classified as mental health disorder by WHO - CNA. LONDON: Many parents will have thought it for a long time, but they now have a new argument to limit their children's 'screen time': addiction to video games has been recognised as a mental health disorder, and can be addictive in the same way as cocaine or gambling, the World Health Organisation said Monday (Jun 18) in a much anticipated update of the International Classification of Diseases (ICD-11). 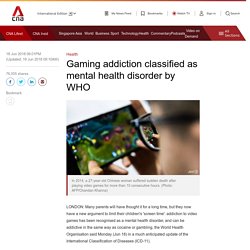 "After consulting with experts across the world, and reviewing evidence in an exhaustive manner, we decided that this condition should be added," Shekhar Saxena, director of the WHO's department of mental health and substance abuse, told AFP. Online and offline "gaming disorder" is grouped with "disorders due to substance use or addictive behaviours" in the ICD's 11th edition, the first major revision in nearly three decades.

The wording of the new entries has been known since January, when the WHO announced problem gaming would be recognised as a pathological condition. Screen Dependency Disorder Is Real, and It Damages Your Child's Brain. We always stress the importance of limiting screen time for kids here at SmartParenting.com.ph. 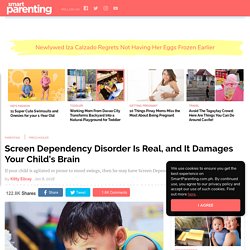 The updated guidelines from the American Academy of Pediatrics (AAP) recommend a maximum of one hour screen time a day for kids ages 2 to 5 years old. Babies below 18 months should avoid it altogether.Various studies have shown that excessive use of screen can hurt children, from sleep problems and difficulties with communication to socialization and brain development. Now, new research has claimed that prolonged gadget use can lead to "Screen Dependency Disorder. "Screen Dependency Disorder or SDD refers to screen-related ‘addictive’ behavior, according to Dr. Have Smartphones Destroyed a Generation? One day last summer, around noon, I called Athena, a 13-year-old who lives in Houston, Texas. She answered her phone—she’s had an iPhone since she was 11—sounding as if she’d just woken up.

We chatted about her favorite songs and TV shows, and I asked her what she likes to do with her friends. “We go to the mall,” she said. “Do your parents drop you off? ,” I asked, recalling my own middle-school days, in the 1980s, when I’d enjoy a few parent-free hours shopping with my friends. Those mall trips are infrequent—about once a month. I’ve been researching generational differences for 25 years, starting when I was a 22-year-old doctoral student in psychology. Around 2012, I noticed abrupt shifts in teen behaviors and emotional states. Generation iPad: Could Device Hurt Toddlers' Development?

What happens when you give your kids unlimited screen time? Online Games Addiction. NUS - Saw Swee Hock School of Public Health. We live in an increasingly wired nation –so it’s not an uncommon sight to see children of increasingly younger ages glued to screens, be it on televisions, smartphones or tablets. 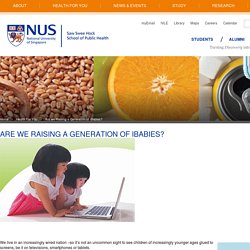 However, studies conducted in other developed countries have shown that increased screen exposure has been linked to lower cognitive and language developmental scores in young children. How does Singapore fare in comparison? A recent study done by a team of medical undergraduates at the Yong Loo Lin School of Medicine aimed to do just that. Led by Dr Falk Mueller-Riemenschneider from the NUS Saw Swee Hock School of Public Health, the team interviewed 740 parents of children under the age of two to find out how much screen time our young ones are exposed to on a daily basis. The first long-term study on how screen time affects children's brains suggests more than 2 hours a day could do damage, Business Insider - Business Insider Singapore. A new and ongoing study from the National Institutes of Health is testing how screen time affects children's brains, CBS News reported. 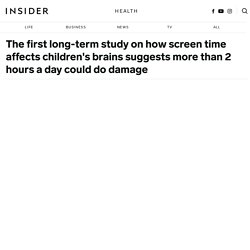 When complete, the study will have followed more than 11,000 children for a decade, monitoring how digital screens like smartphones, video games, and tablets are changing the young brain. The first brain scans from the study have been analyzed, and researchers have concluded that children who spend more than seven hours a day on screens experience "premature thinning of the cortex," Gaya Dowling, one of the study's authors, said in an interview with "60 Minutes. " THE INFLUENCE OF EARLY MEDIA EXPOSURE ON CHILDREN’S DEVELOPMENT AND LEARNING.

Prevalence and Correlates of Excessive Internet Use among Youth in Singapore. Adolescent screen time and attachment to parents and peers. - PubMed - NCBI. Pri 5 pupil skipped meals, stole from parents to feed gaming addiction, Latest Singapore News - The New Paper. He was so obsessed with computer gaming that he neglected his family, studies and his health. 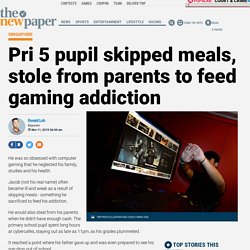 Jacob (not his real name) often became ill and weak as a result of skipping meals - something he sacrificed to feed his addiction. He would also steal from his parents when he didn't have enough cash. The primary school pupil spent long hours at cybercafes, staying out as late as 11pm, as his grades plummeted. It reached a point where his father gave up and was even prepared to see his son drop out of school. That was before Touch Cyber Wellness counsellor Cynthia Khoo stepped in, helped Jacob break free of his addiction and set him on the path to recovery. Jacob's problem is reflective of the alarming rise in the number of gaming addicts. His father told The New Paper: "I tried everything to make my son listen to me but it only made him more rebellious. Don't play around with gaming addiction, Letters in Print News. The report that the World Health Organisation (WHO) will define gaming disorder as a disease later this year needs to be highlighted (WHO to define gaming disorder as disease; Jan 6). 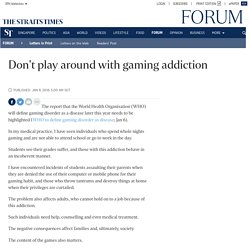 In my medical practice, I have seen individuals who spend whole nights gaming and are not able to attend school or go to work in the day. Students see their grades suffer, and those with this addiction behave in an incoherent manner. I have encountered incidents of students assaulting their parents when they are denied the use of their computer or mobile phone for their gaming habit, and those who throw tantrums and destroy things at home when their privileges are curtailed. The problem also affects adults, who cannot hold on to a job because of this addiction. Such individuals need help, counselling and even medical treatment. The negative consequences affect families and, ultimately, society. The content of the games also matters. We need to confront this addiction at its root and not take it lightly.