Haka gets revamp in Māori fitness programme. By Cleo Fraser Getting fit will no doubt be a New Year's resolution for many Kiwis after indulging over the festive break. 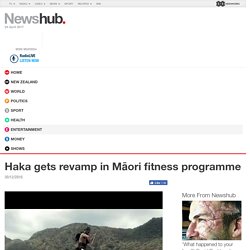 For those who aren't inspired by the treadmill, an Auckland couple have developed a unique fitness programme which uses haka movements to help shed extra kilos. The haka is known for being fierce, strong, powerful - and now a fitness fad. Ngarino Te Waati and his wife Kura have created an online training programme that uses haka movements to help people get fit. "It's got a traditional background - you'll see many of the movements that are stemmed from the ancient days," he said.

Mr Te Waati has drawn on his experience as a personal trainer, professional rugby player and work developing a Māori theatre group to create the programme. The daily online lessons run for 15 minutes and each is influenced by a Māori God. An introduction video to the programme has been viewed hundreds of thousands of times in just a few days. Newshub. Serena Williams hits back at sexism in sports after being labeled 'manly' by online trolls  With four Olympic gold medals, five Wimbledon championships, and 21 Grand Slam singles titles under her belt, there's no disputing that Serena Williams is one tough cookie on the tennis courts.

But for all her victories, the sportswoman still has to do battle with sexists who body-shame her and hold her to different standards than the boys. Last month, a troll on Twitter suggested that Serena’s victory at this year’s Wimbledon was due to her masculine figure, writing on the social media site that she was 'built like a man'. Now, the 33-year old has told New York Magazine that it's not just comments about her figure that are unfair - she also faces a constant double-standard when it comes to on-the-court behavior. Scroll down for video. JK Rowling has epic Twitter comeback for Serena Williams troll. The Harry Potter author took to the social networking world to gush over Serena after watching her take to the Wimbledon court over the weekend. 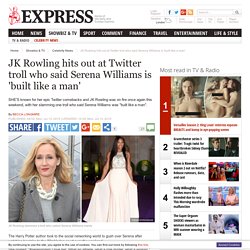 She posted: "#SerenaSlam I love her. What an athlete, what a role model, what a woman. " Femininity in Female Athletes (Women & Sports).wmv. Article. The Blues are reportedly unclear why Sonny Bill Williams covered up a sponsorship logo on his playing jersey during last night's Super Rugby match against the Highlanders and plan on taking the matter up with Williams' manager Khoder Nasser. 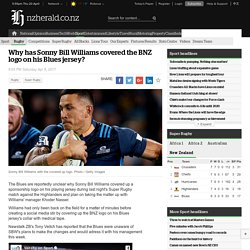 Williams had only been back on the field for a matter of minutes before creating a social media stir by covering up the BNZ logo on his Blues jersey's collar with medical tape. Newstalk ZB's Tony Veitch has reported that the Blues were unaware of SBW's plans to make the changes and would adress it with his management this week. The mysterious move sent social media into a flurry, with hundreds of Twitter users asking why? The powerful 31-year-old midfielder is the only Blues player on the field to have covered the BNZ logo. This is Williams' first 15s rugby game since the 2015 Rugby World Cup final. Continued below. Female kicker makes college football history. 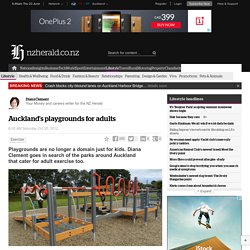 Diana Clement goes in search of the parks around Auckland that cater for adult exercise too. Why should kids have all the fun? And why should adults need to pay a small fortune at a local gym for a workout? The latest trend in playground design is to provide fun and fitness for all ages. Auckland Council has recognised this and more and more adult fitness equipment is appearing in playgrounds around the city. 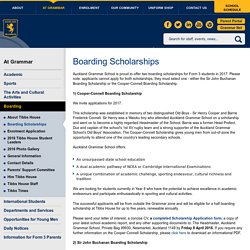 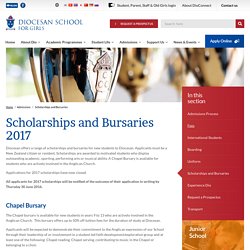 Applicants must be a New Zealand citizen or resident. Scholarships are awarded to motivated students who display outstanding academic, sporting, performing arts or musical ability. A Chapel Bursary is available for students who are actively involved in the Anglican Church. Applications for 2017 scholarships have now closed. Rules / Bylaws / Policies / Forms - College Sport for Auckland, North Harbour, Waitakere, Counties Manukau. Free pools for 16 years and under. From 2 April 2013, Aucklanders aged 16 years and under have free access to all council pools across the region during standard operating hours. 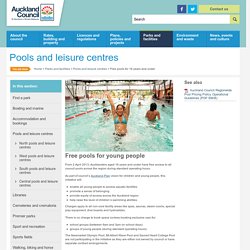 As part of council’s Auckland Plan vision for children and young people, this initiative will: enable all young people to access aquatic facilitiespromote a sense of belonging provide equity of access across the Auckland regionhelp raise the level of children’s swimming abilities. Charges apply to all non-core facility areas like spas, saunas, steam rooms, special play equipment, dive boards and hydroslides.

There is no charge to book space (unless booking exclusive use) for: school groups (between 9am and 3pm on school days)groups of young people (during standard operating hours) The Newmarket Olympic Pool, Mt Albert Wave Pool and Sacred Heart College Pool are not participating in the initiative as they are either not owned by council or have separate contract arrangements. Effects on adult charges. Information - College Sport for Auckland, North Harbour, Waitakere, Counties Manukau. Premier Registrations Sports listed as Premier in the Sanctioned Sport Schedule require Premier Registrations in EnterNOW. 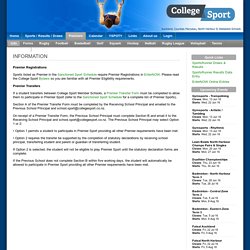 Please read the College Sport Bylaws so you are familiar with all Premier Eligibility requirements. Premier Transfers If a student transfers between College Sport Member Schools, a Premier Transfer Form must be completed to allow them to participate in Premier Sport (refer to the Sanctioned Sport Schedule for a complete list of Premier Sports). Section A of the Premier Transfer Form must be completed by the Receiving School Principal and emailed to the Previous School Principal and school.sport@collegesport.co.nz.

Nocookies. Female beach volleyball athletes no longer have to be dressed in bikinis. Beach Volleyball: the dressing code Athletes in the event have exclusively worn bikinis since the sport was introduced at the 1996 Olympics in Atlanta. 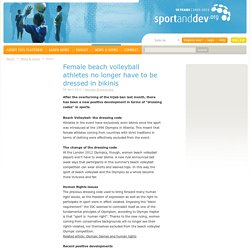 This meant that female athletes coming from countries with strict traditions in terms of clothing were effectively excluded from the event. The change of the dressing code At the London 2012 Olympics, though, women beach volleyball players won't have to wear bikinis. A new rule announced last week says that participants in this summer's beach volleyball competition can wear shorts and sleeved tops.

In this way the sport of beach volleyball and the Olympics as a whole become more inclusive and fair. Human Rights issues The previous dressing code used to bring forward many human right issues, as the freedom of expression as well as the right to participate in sport were in effect violated. The Rules of Beach Volleyball - EXPLAINED! The History of Beach Volleyball. Popular View Inquiry Questions. MediaLesson. Should we have overweight-only gyms?

Last updated 08:51, June 17 2016 123rf.com Are gyms too intimidating for overweight people who want to get fit? It is the paradox that sometimes the solution to the problem is the problem itself. When Kishan Shah weighed 180 kilograms, he wanted to lose weight but was too ashamed to step foot inside the very place that would help him to achieve that. "The idea of setting foot in a gym terrified me," he wrote in an article. Kids Tell Us The Truth about Sports Parents... YPS Complete 5 09 2012. Sport News - Radio Sport - New Zealand's Premier Sports Station. Final YPS infographic. Sport News - Radio Sport - New Zealand's Premier Sports Station. Quick look Sport and Active Recreation in the Lives of New Zealand Adults. Activity levels in New Zealand. Adults The Annual Update of Key Results 2013/14 found: Young People’s Survey (2011) » Managing sport » Sport New Zealand.

Back Sport New Zealand’s 2011 Young People’s Survey (YPS) is the most significant piece of research into young New Zealanders’ participation in sport and recreation in more than 10 years. The survey is a school-based survey of over 17,000 young New Zealanders (5 to 18 years old). The scale of the survey allows us, for the first time, to explore how sport and recreation fit into the lives of boys and girls of different ages and backgrounds. It provides a voice for young people to tell us about their sporting lives. The results tell us many positive things, as well as providing us with some challenges. Main report and related material. Sport and Active Recreation in the lives of New Zealand Adults. The Rules of Beach Volleyball - EXPLAINED! Sonny Bill Williams - #leaveyourmark – Level 3 Mental Commitment. SKINS - Train & Play Harder. Recover Faster. Find Your Fit - 2014. Untitled. Untitled.

Reebok - Freak Show - Be More Human. Playgrounds for senior citizens? Genius idea. Narrator: Spain is getting old. And the old need a place to play. For Francesca Guerrera, 84, it's a matter of survival. Francesca Guerrera: I am not someone to stay at home. I get out a lot. Associate Members - MyNetball - Netball New Zealand.

MyNetball - Netball New Zealand Newsletters. Black Ferns. The Black Ferns are New Zealand’s senior women’s rugby team. Ian Thorpe felt people forced him to come out as gay. Thorpe celebrating with teammates at the 2000 Olympics. WHEN Ian Thorpe came out as openly gay midway through 2014, it ended years of speculation about the swimmer’s private life. So often the focus of intense media scrutiny, attention always seemed to drift away from his exploits in the water and land instead on his sexual identity. Always #LikeAGirl. These gay rugby players are dismantling stereotypes with their powerful new campaign.

Rugby is no joke. Especially in South Africa. The team sport is fast and aggressive. Ian Thorpe felt people forced him to come out as gay. This Girl Can – what about you? Jockey's latest All Black shoot. The Secret Life of a Saudi Women's Soccer Team. Incredible 86 Year Old #Gymnast. JK Rowling has epic Twitter comeback for Serena Williams troll. Landing page header 03. Jockey's latest All Black shoot.